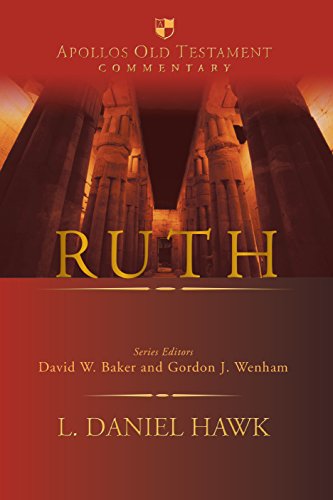 In 2015 three commentaries on Ruth were published with the same target audience and from the evangelical end of the theological spectrum, among which is the present work by Daniel Hawk (the others are by James McKeown in Eerdmans’ Two Horizons Old Testament Commentary series and Daniel Block in the Zondervan Exegetical Commentary on the Old Testament series). Commentaries need to jostle for attention in the Ruth marketplace, and Hawk’s commentary draws attention to itself by highlighting the themes of identity and ethnicity. Monographs and articles have been written on Ruth focusing on these issues (e.g., Peter H. W. Lau, Identity and Ethics in the Book of Ruth: A Social Identity Approach, BZAW 416 [Berlin: de Gruyter, 2011]; Victor H. Matthews, “The Determination of Social Identity in the Story of Ruth,” BTB 36 [2006]: 49–54), but this is the first commentary to use social-identity theory as its primary interpretive lens. Most of Hawk’s previous work has been on the book of Joshua, and his expertise in OT narrative shines through in this commentary.

For those not familiar with the general form of the Apollos series, an introductory chapter is followed by comments on each section of biblical text, in this case the individual chapters of Ruth. The introduction to the commentary contains a judicious discussion of ethnicity and identity, which is necessary groundwork since Hawk views Ruth’s Moabite ethnicity as generating “the energy that drives the plot” (p. 20). Along with many recent commentators, Hawk situates the composition of Ruth in the time of Ezra-Nehemiah (pp. 31–36). Regarding the theology of Ruth, Hawk notes that, although God is frequently mentioned by the characters, the narrator only mentions God acting once (pp. 39–40). The effect is that the actions of the characters are foregrounded, though I’m not convinced that this necessarily portrays God as acting “in response to rather than as the cause of human acts of blessing and ḥesed” (p. 42; emphasis original). A separate treatment of the central themes of ḥesed (“lovingkindness”) and redemption would have rounded out the introductory chapter.

The commentary on the Ruth chapters proceeds as follows: a new translation, textual notes, literary form and structure, comments according to textual units, and an explanation section. In what follows I will mention some of Hawk’s more noteworthy interpretations from each chapter. Regarding Ruth 1, his discussion of šûb (“to return”) and hālak (“to go, walk”) points out their spiritual associations with conversion beyond the physical journey to/from Moab (pp. 50–51). Naomi’s saying no more to Ruth (1:18) is viewed as the mother-in-law giving the silent treatment in the hope that Ruth might leave (p. 62). The explanation section deals with marginalised groups in the OT as well as legitimate responses to suffering (pp. 64–68). Regarding Ruth 2, Hawk follows Jonathan Grossman (“‘Gleaning among the Ears’—‘Gathering among the Sheaves’: Characterizing the Image of the Supervising Boy (Ruth 2),” JBL 126 [2007]: 703–16) in viewing the foreman’s response to Ruth as reflecting the prevailing exclusivist stance against Ruth (pp. 79–80). The explanation section for Ruth 2 also highlights the importance of showing hospitality to outsiders (pp. 88–91).

Regarding Ruth 3, Hawk proposes that Ruth deliberately calls upon Boaz to function as a gōʾēl (“kinsman-redeemer”) as a strategy for him to marry Ruth and concurrently “defuse the scandal of her Moabite identity” (p. 107). Hawk finds Boaz’s speech in Ruth 3:13 “completely confusing” (p. 111), but I do not find Boaz’s words so baffling, since it is dangerous for her to return back to town in the middle of the night. The explanation section for this chapter deals with the poor in the OT. Regarding Ruth 4, Hawk translates pĕlōnî ʾalmōnî (4:1) as “Nobody Special” (p. 119), but this rendering seems to imply that the Hebrew expression is actually the nearer kinsman’s name. Some readers might find Hawk’s description of Boaz’s transaction at the town gate a little negative: he “games the system” (p. 121) and the redemption of the field is a “clever ruse, a smoke screen” (p. 126). The explanation section discusses the expansive application of the law in the narrative of Ruth and elsewhere in the OT, as well as helpfully drawing the trajectory of this principle through to Jesus (Mark 2:23–28). There is also a clear discussion of intermarriage in Ruth with reference to the law’s prohibition of this practice (Deut 7:2–4).

Sometimes during the act of reading, one wishes that the book would not end. This was my experience of reading this commentary. The book is well written, with the prose displaying an elegant grace. When interpretive difficulties arise, different views are adduced and a position taken. Hawk points out clearly the literary structures of chapters and phrases, as well as the structural parallels and similarities between chapters. He is well attuned to the nuances and subtleties of the Hebrew language, often bringing out the significance of a word or phrase that is lost in English translations. He also draws out the tensions in the plot of the story of Ruth (e.g., Boaz’s somewhat breathless speech to the kinsman-redeemer in Ruth 4:4), an important feature missing in many commentaries. For all these reasons I was happily swept along as I read.

Yet I also did not want the commentary to end because of elements that I was anticipating might be in it. The editor’s preface lists the target audience as “preachers, teachers and students of the Bible.” This commentary series aims at both exegesis and hermeneutics, hoping to serve both the academy and the church. The former target audience is covered better than the latter. As I read the introductory chapter and the explanation sections, I was left wanting more theology, and in particular, biblical theology of the sort that traces motifs through the Scriptures as a whole. Hawk sets themes within the context of the OT, but there were only brief hints now and then of how these themes might be drawn through to Christ and the NT. Christian preachers and teachers would appreciate some more concrete application to context(s) today, and this requires a consideration of the difference Jesus makes as the culmination or expression of a particular theme. But maybe I am expecting too much from a single commentary. So perhaps a full suite of up-to-date commentaries on Ruth for those with exegetical, hermeneutical, and homiletical interests might comprise Hawk, McKeown, and at least one other focusing on biblical theology with an eye to contemporary Christian application. I’ve found Hawk’s and McKeown’s commentaries to have their strengths in exegesis and hermeneutics, respectively (Block’s Zondervan commentary was not at hand for this review). On its own, though, Hawk would still be a fine resource for teaching through the book of Ruth.