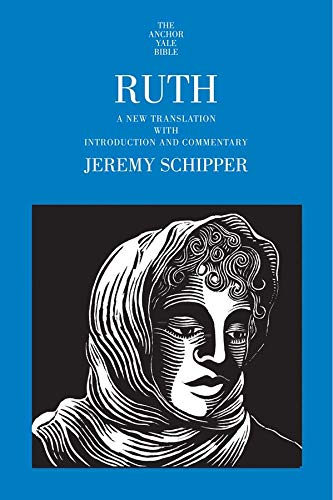 Ruth: A New Translation with Introduction and Commentary

This commentary by Jeremy Schipper, associate professor at Temple University, Philadelphia, succeeds the volume by Edward Campbell in the Anchor Yale Bible series, published in 1975. The series is interfaith (Protestant, Catholic, and Jewish) in scope, and aims to present contemporary scholarship for scholars and the educated nonspecialist. Schipper does not intend to “replace or supplement” Campbell’s volume but to produce an independent contribution (p. xi). He has indeed produced a fresh and thought-provoking reading of the book of Ruth, using a minimalist interpretive approach that ends up being complementary to the volume it replaces. While Campbell’s is strong on theology, historical context, and narratological features, Schipper’s is strong on human relationships, ancient historical literary context, and Hebrew diction.

The commentary begins with a 51-page introduction. In a thorough and closely-argued manner, Schipper begins by outlining his translation approach, then explains his reason for reading Ruth within ancient Israelite literary traditions (without assuming that Ruth is dependent on any biblical text, or vice versa) instead of canonical contexts (pp. 13–16). Authorship and composition are then discussed, with Schipper tentatively dating the book to the early Persian period (p. 22). He then discusses his focus on “the nature of relationships in Ruth” (pp. 28–51), covering topics such as divine activity and acts of kindness, sexual desire (including queer readings), exogamy and ethnicity, and household organization. This volume follows the Anchor series format and includes the following sections: an introduction; a bibliography focusing on works since 1975; Schipper’s own translation of Ruth; then detailed textual and translational notes on the verses, with interpretive comments at the end of each textual unit.

Schipper’s translation aims more at accuracy than style, although his translation reads well. Two of his more novel translations derives from his identification of interrupted speech. Instead of smoothing over the syntax, Naomi’s speech is translated as, “May YHWH give to you … [Oh, forget it!] Find rest, each one in the household of her husband!” (2:9). Similarly, the speech of the supervisor of the harvesters is translated as, “She came and stood from then, the morning until now, this … her sitting … the house … a little” (2:7). Other translations reflect his focus on social relationships: Naomi’s daughters-in-law are “under her authority” (rather than “with her”; 1:7, 11, 22); Orpah is said to return to “her people and her ancestors” (rather than “her gods”; 1:15); and similarly, Ruth vows, “your ancestors, my ancestors” (rather than “your God, my God”; 1:16). Schipper prefers “kindred redeemer” throughout. On the threshing floor, Ruth follows Naomi’s instruction to undress herself, rather than to uncover Boaz’s feet (3:4, 7). While not all readers will find these, and other, translations convincing, Schipper does provide support for each one in his textual notes.

In contrast to the majority of Ruth commentators, Schipper takes a minimalist approach. He makes a distinction between the author, narrator, and commentator, which is important for him, because “one should not necessarily attribute a commentator’s interest, interpretative proposals, or textual connections to Ruth’s author or narrator” (p. 28). The outcome is a circumspect, text-centric approach, whereby Schipper only offers definite interpretations if he finds them explicitly stated by the narrator. For instance, the interpretation of Boaz’s provisions to Ruth, including the large amount of grain that she gleans, is left to “readers’ discretion” (p. 131). The provisions are evidence of Boaz’s generosity and/or alliteration and wordplay based on his name (b’z and ‘azb, meaning “abandon” in 1:16; 2:11, 16, 19). At times, like in this instance, I wondered if Schipper made too much of these literary features (to which he also includes puns, assonance, and rhyme; p. 7), elevating their literary effect above meaning. As he freely admits, an interpreter cannot be certain that these were intended by the author (p. 7). As such, I tend to consider them as secondary, used to highlight phrases or words, or to support the meaning of words in the text.

Schipper does well to apply his minimalist approach throughout the commentary. At times, he skirts very close to providing an interpretation, although the narrator does not clarify an action. For instance, on the threshing floor, “that Ruth undresses and lies down close to Boaz, possibly even at his genitals, is extremely suggestive.” And based on the cumulative evidence in the chapter, he argues that there is a “strong possibility of sexual activity” (p. 157). To be clear, Schipper still views the encounter as ambiguous, and leaves the final interpretation to the reader. At other times, this opportunity is not left to the reader. For instance, when Ruth happens to “chance upon” Boaz’s field, Schipper forecloses the possibility of God’s action (2:3; p. 117). This is based on the noun’s usage elsewhere in biblical prose (1 Sam 6:9; 20:26). A different form of the noun, with a different subject (Gen 24:12; 27:20), is viewed as inadmissible evidence for “chance” as granted by God. Yet I wonder if narrowing the focus to a particular word, and a specific form of the word, might skew the biblical evidence. The motif of chance and the working of God might be found in the Old Testament without the use of the specific word found in Ruth 2:3. If so, verses such as Proverbs 16:33 might be adduced. Again, Schipper here suggests that the word could be “a product of narrative style since miqrehā creates alliteration and rhyme” with mākĕrâ (2:3 and 4:3; p. 117). Based on explicit narratorial attribution only, Schipper limits God’s role in the book of Ruth to the provision of fertility (4:13), although he views this action as “very important” (p. 35).

This commentary achieves the aim of the series to present contemporary scholarship to academics and educated laypeople. The selective representation of characters and events in narrative does leave gaps for a reader to fill in (pp. 24–28). The beauty of Schipper’s minimalist approach is that it allows for readers to fill those gaps. While many readers will find more meaning, and more of God in the narrative than Schipper does, his focus on human relationships brings out important issues about the interactions between Judahites and Moabites, and the roles of different members of social groups in ancient Israel.