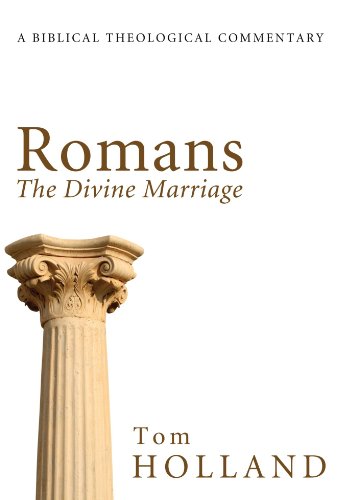 Tom Holland has shouldered an unusual mantle in his commentary on Paul's Epistle to the Romans. He desires to stand squarely within the Reformation tradition, while taking issue with many Reformational readings of Romans. For Holland, many readings of Romans (Reformational or not) falter in one of two areas. First, they insufficiently acknowledge the fundamental indebtedness of the letter to the OT. Second, they insufficiently grasp the corporate character of Romans. Romans, Holland maintains, was written to a community. It speaks to individuals only in so far as they are members of that community (p. 19).

The subtitle of this commentary captures both of these concerns. Romans reflects a “divine marriage”-in Christ, God has constituted believers his bride. This marriage is “the culmination of the new exodus” theme that Holland argues is central to OT and NT biblical theology (p. ix). For Holland, the promises of the OT converge upon a promised new exodus that would entail, among other things, restoration from exile, a Spirit-anointed Davidic scion, a new covenant, heart-circumcision, a return to Jerusalem, a new temple, and a marriage with a cosmic banquet (pp. 8-9). This cluster of promises provides the interpretative matrix for the whole of the NT.

How do these commitments inform Holland's reading of Romans? Holland understands Paul's personification of “sin” in Romans in terms of a “pseudonym for Satan” (p. 62n12; cf. pp. 82n11, 236n70). Consequently, the fall of Adam resulted in “Adam [being] taken as Satan's willing prisoner,” and his posterity “in bondage to Satan” (p. 79). The fall is nothing less than “spiritual adultery” (p. 160). This condition, according to Rom 3:9-18, is one that Paul also represents in “new exodus” terminology-Adamic man is in a state of exile (p. 75).

How does Holland understand “justification,” a leading theme of the epistle, to operate in Romans? He is satisfied with neither Reformational nor New Perspective readings of this concept: the New Perspective is “wrong” in its rejection of the Reformation, while the Reformation is incomplete (pp. 109-10). Justification is “a rescue from a condition of condemnation to an experience of covenantal relationship with God” and, as such, is a corporate category (p. 126). God justified “the community” and did so at the “moment of Christ's death” (p. 126). Individuals “become part of the justified community” through faith and so “catch up experientially with what Christ has already done for all his people” (p. 126). What does it mean to be corporately justified? It means, in part, that the church, the bride of Christ, may not be charged with “adultery in the new marriage” (p. 191). And yet, Holland cautions, “Paul's argument [here] cannot be directly applied to the experience of the individual” (p. 191). What does it mean to be individually justified? Justification is legal and forensic, but it is more than that-spiritual “circumcision” (Col 2:11-12), “salvation,” and “God making covenant” are all necessary components of corporate-and presumably individual-justification (p. 129).

Holland's exposition of Romans is an engaging and stimulating one. Given Paul's express concern to anchor his gospel and the righteousness of God in the OT (Rom 1:17), Holland's instinct to place Romans on the biblical-theological trajectory extending from the OT, and his identification of Romans as a fundamentally covenantal letter are all surely correct. Holland's proposal, furthermore, may help to explain both some of the background of Paul's marriage analogy in Rom 7:1-6 and the preponderance of Isaianic quotations in the epistle.

As suggestive as Holland's thesis is, it is not altogether persuasive. Had the OT narrative that Holland charts informed not only the content but also the structure of Romans in the way that Holland proposes, one might have expected more explicit indication of this fact in the epistle. As it stands, a number of the exodus and exile connections for which Holland pleads seem to me to be exegetically tentative at best. The “new exodus” may contribute to the biblical-theological background of Romans, but it may be putting matters too strongly to assign to it a controlling and generative role in the letter.

Furthermore, Holland's treatment of justification raises questions that do not receive full answers. Precisely how do what Holland terms communal justification and individual justification intersect? To what degree do they overlap in Christian experience? What exegetical grounds are there for claiming that justification in Paul is a concept inclusive of non-forensic and arguably transformative blessings?

One of the greatest strengths of Romans: The Divine Marriage is that it compels readers to read Romans in light of the categories and covenants set forth in the OT. Whether or not one agrees entirely with Holland's reading, this work serves to remind us that the Scripture is a unified, not a fragmented, book with a single, coherent, and integrated message. And for that reminder we may be genuinely grateful.