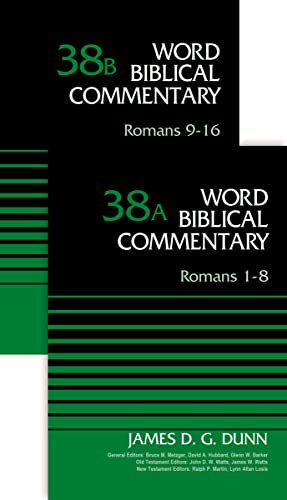 Following in the illustrious train of his recent predecessors at Durham, C.K. Barrett and C.E.B. Cranfield, Professor Dunn has undertaken the monumental task of commenting on Paul’s letter to the Romans. Overall, this commentary provides a fresh rethinking of the meaning of Paul. Prof. Dunn tackles virtually every significant point, and he is not afraid to question many standard views and try to show where he believes they are deficient.

Besides filling a required slot in a series, what justifies writing yet another commentary on Romans? Dunn believes his work responds to two needs: (1) to see the grand movement in Paul’s thought, not losing the forest for the trees; and (2) ‘to penetrate more fully into the historical context within which the letter was first written and to which the letter was addressed’ (p. xiv). For Dunn that historical context must reckon with what he calls ‘the new perspective on Paul’ (see his article by that name in BJRL 65 (1983), pp. 95–122). Dunn follows the perspective of E. P. Sanders (Paul and Palestinian Judaism) who described Judaism of the first century as ‘covenantal nomism’. According to Sanders and Dunn, Judaism was not a religion of ‘works’; Jews enjoyed salvation because of their membership in the covenant people of God. Obedience to the law demonstrated the Jews’ response to God’s grace and served only to maintain their covenant relationship. In Dunn’s view the law expressed Israel’s distinctiveness; it functioned as an ‘identity marker’ and ‘boundary’ (p. lxix), not a means of salvation.

Dunn believes that an erroneous Lutheran emphasis has dominated Protestant exegesis and imposed a false grid on understanding Paul. In Dunn’s reading of Paul, the Jews’ problem was not that they tried to earn salvation by keeping the law, but that they tried to keep it to themselves and they rejected Jesus as Messiah. This, then, constitutes the first commentary on Romans viewed from this new perspective.

Of course, a major task for a reviewer lies in assessing whether Dunn’s explanation of the particulars of Romans supports this ‘new perspective’. In reading through the commentary this reviewer believes that though Dunn’s perspective fits in some texts, his case is unconvincing at many and extremely unlikely, if not impossible, at several. Space only permits considering some texts where Dunn’s case is doubtful. On 3:20 Dunn denies that in speaking of ‘justified by works of the law’ Paul rejects the idea that a person can earn God’s favour by good works (pp. 153–155). According to Dunn, Paul’s target was the devout Jew who, as already accepted by God, was simply to maintain his Jewish identity by performing the distinctively Jewish rites as found in the law. But this hardly does justice to the words ‘justified by’. Paul attacks those who believed that the source of justification was in the works of law.

Dunn argues that in 2:1–3:8 ‘works of the law’ means ‘what is necessary to be (become or remain) within the Covenant’ (p. 159). However, it is far from clear whence Dunn derives ‘remain’. For Paul the Jews were not within the salvific covenant. He was not arguing that the Jews could not stay in the covenant by these works. He contends that no-one—Jew or Gentile—can be justified at all through doing works.

On 3:27 concerning ‘law of works’, Dunn alleges that the issue is not good works to earn salvation, but works that denote ‘covenant obligation and distinctiveness’ (p. 186). But this does not fit well here at all. Boasting is a danger to those who are trying to impress God with their good works (cf. Eph. 2:8–9), who think they can merit salvation. Paul insists that the faith-way to justification excludes such boasting.

Dunn’s explanation of 4:5 fails to convince when he denies that Paul’s language of working, reckoning and reward was a description of the Judaism of Paul’s day (p. 204). Why else would he put his argument in these terms? Dunn’s explanation that Paul simply employed a useful analogy is special pleading where the text clearly goes against his theory. Likewise his treatment of 6:14 (‘you are not under law but under grace’) does not work. Dunn alleges that Paul imports the Jewish framework—that Jews had misused the law, turning it into a national guardian angel (p. 339). But why raise this point to the dominantly Gentile audience? Realizing this flaw, Dunn must posit that these Gentiles were previously attracted to Judaism (p. 340) in a judaizing way. This is a vain attempt to make his thesis fit. As most commentators recognize, the sense is better if the law/grace tension is between trying to earn salvation versus receiving it as a gift.

On 9:32 Dunn’s theory fails to account adequately for the Jews’ failure to attain (pursue) righteousness by faith. Paul argues that the Jews’ deficiency was their pursuit ‘by works’ (p. 582). Dunn cannot account for this. On 10:3 Dunn argues that ‘establish their own righteousness’ is an example of Paul’s view of ‘covenantal nomism’ (pp. 587f.). Dunn argues that the Jews were ‘seeking to “establish” covenant righteousness as “theirs” ’ (p. 588) and theirs alone. This, says Dunn, was their fault: that one had to be a good Jew to be righteous. Yet again, he fails to convince. Most scholars rightly see the Jews’ fault as thinking that in their zeal for the law they were seeking their own righteous status before God.

This brief catalogue raises serious doubts in this reviewer’s mind that ‘the new perspective on Paul’ can be derived from a fair exegesis of Romans. No doubt Dunn has given us a coherent, consistent and sustained explication of the ‘new perspective’. He adopts the position and shows how it could fit all the way through. But that is the problem—we only see how it could fit. One suspects in too many places that Dunn has read his view into the text when it isn’t really there. It is often an imposition, rather than a straightforward reading of Paul. (S. Westerholm, Israel’s Law and the Church’s Faith (Grand Rapids: Eerdmans, 1988), presents a penetrating analysis and critique of the ‘covenantal nomism’ view.)

Nevertheless, though Dunn has failed to convince this reader that Paul’s view of ‘law’ is ‘covenantal nomism’, the commentary proves to be very worthwhile. His introduction articulates a balanced explanation of the church at Rome and Paul’s motives in writing. Significantly, he provides extensive argumentation that chapter 16 was an integral part of Paul’s original letter (pp. 884f.). In reading Romans with Dunn one feels the help of a perceptive, insightful and mature scholar. Though his writing style is often extremely cumbersome, the exegesis is fair to the options. His defence of Phoebe as a deacon and ‘patron, protector’ of the church at Cenchrea was refreshing (pp. 886–888). Certainly Dunn targets the commentary at the scholar or advanced student. Very few pastors will want to wade through his extensive ‘Comment’ sections, though they will profit considerably from the ‘explanations’.

Of course, in two volumes of this size most readers will differ with the author at a variety of points. Space permits mention of only a few for this reviewer. I found his exegesis of 5:12, especially the phrase ‘because all sinned’, obtuse (pp. 273f.). Dunn avoids saying ‘all sinned in Adam’—he dislikes the concept of ‘corporate solidarity’, unnecessarily, I believe. But what does it mean? His explanation on p. 290 is better, but Dunn never explains how the aorist all ‘sinned’ conveys ‘humankind’s continued acts of sin’ (ibid.). In addition, Dunn denies that Paul’s discussion of Adam requires that Adam actually was a historical figure or that his ‘sin’ was a literal, historical event.

In commenting on ‘we died to sin’ in 6:2 Dunn identifies this death as the death of Adam and those in Adam (pp. 307f.). Surely not! This refers to the believer’s death in Christ, as the following verses make clear. All died in Adam (5:12); but not all died to sin. Only Christians did. Dunn corrects this misstatement in the Explanation section (p. 326).

A few final comments or questions remain. The decision to include only principal topics resulted in an Index only slightly more than three pages. This is grossly inadequate for a work of this size, a work designed to be a major reference tool. The wealth of data in these volumes remains inaccessible for many kinds of searches. I also felt that Dunn too frequently simply referred the reader to Cranfield’s two volumes in the ICC series for fuller explanation or even data to support a position. At times he fails to draw a conclusion or explain an issue, and so one must consult Cranfield to learn the position or the various options. On the other hand, Dunn’s citations and documentation of biblical data, ancient literature and secondary sources are usually encyclopedic.

If one possesses Cranfield, is Dunn a necessity? My judgment must be negative. Indeed, if one has neither, Cranfield has the edge. His treatments of the interpretive options are fuller, his argumentation clearer, his exegesis more balanced, and his explanations of the theological significance and implications provide more help and insight for contemporary readers. And in the end, I find his interpretation of Paul’s position on the law and the Jews to be more convincing.