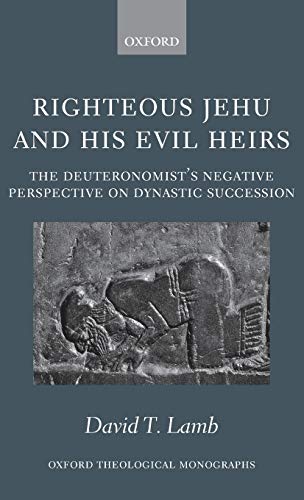 Righteous Jehu and His Evil Heirs: The Deuteronomist’s Negative Perspective on Dynastic Succession

King Jehu is certainly one of the most controversial characters in the Hebrew Bible. While Hosea announces the punishment of his dynasty “because of the massacre of Jezreel” (Hos 1:4), the Books of Kings provide two opposite appraisals of his action (2 Kgs 10:29–31). No wonder that commentators are divided with regard to the evaluation of his reign that the final redactor of Kings suggests. In the present book, adapted from his doctoral dissertation, David Lamb addresses this dilemma from a compositional criticism perspective assuming a nothian model for Kings (an exilic deuteronomistic redaction, henceforth Dtr).

Lamb points out striking peculiarities in the manner in which the biblical text presents Jehu, by means of meticulous comparison with the Dtr material about the other kings in 1 Sam to 2 Kgs, as well as with the ANE royal inscriptions (ch. 2). He provides clear and concise syntheses of various themes (e.g., divine anointing and election, tribute), summarized in helpful tables. Against this background, it appears that positive aspects of Jehu’s career are highlighted (e.g., his divine election and anointing), whereas some negative facets are omitted (the tribute to Shalmaneser III), mitigated (the territorial losses), or vindicated (his violence). Moreover, according to Lamb, the emphasized characteristics of Jehu make him one of the favorite leaders in the Deuteronomistic History; parallels with David show a pro-charismatic Dtr bias (ch. 3). On the contrary (ch. 4), Dtr’s handling of his sources on Jehu’s heirs betray a negative stance (for instance, Jeroboam II’s huge successes are mentioned in passing). In sum (ch. 5), Dtr deliberately shaped the narrative about Jehu in a positive way and adopted a negative perspective on the rest of his dynasty, despite information from his sources that could lead to different evaluations. Dtr described Jehu as a righteous king while criticizing his heirs, in order to discredit the principle of dynastic succession and to promote charismatic leadership.

Lamb demonstrates his thesis in an admirably logical and methodical way. Since this book makes an excellent case for a positive answer to the aforementioned dilemma, the most appropriate way of fuelling the debate consists in pointing out some of its limits.

First, despite the merits of its methodical approach, it seems somewhat mechanistic and neglects some subtle features of the Jehu narratives. Indeed, another book that appeared the same year was devoted to the same subject but from a narrative criticism point of view: Lissa M. Wray Beal, The Deuteronomist’s Prophet: Narrative Control of Approval and Disapproval in the Story of Jehu (2 Kings 9 and 10) (LHS/OTL 478; New York: T&T Clark, 2007). Wray Beal draws the opposite conclusion to Lamb’s: the narrative voices suggest that Dtr ultimately disapproves Jehu’s action. For instance, Wray Beal writes,

Overall, Wray Beal discerns in the narrative a dual depiction of Jehu, including both positive and negative elements, which were reflected in the final evaluation (10:29–31).

The second limit of the present book lies, in my opinion, in some flaws and gaps in the redactional analysis. Since the nothian theory (which Lamb endorses after a brief justification [p. 2–8]) remains pertinent in present research, it would probably be unfair to insist on the evident fact that proponents of models integrating several Dtr layers or multiple pre-exilic redactions, not only sources, might be frustrated (see the recent Forschungsbericht of J. Hutton, The Transjordanian Palimpsest [BZAW 396; Berlin: de Gruyter, 2009], 79–156). More to the point, some criticisms can be made even from a nothian perspective. Lamb downplays the striking presence of negative elements in 2 Kgs 10:29–33; however, inasmuch as two critical remarks (vv. 29, 31) surround the positive oracle given to Jehu (v. 30), and since this is immediately followed by a notice about Israelite territorial losses caused by God himself (v. 32), it seems difficult to avoid the conclusion that the last word consists in a mitigation of Jehu’s merits. Lamb considers that Jehu is a “righteous” king for Dtr, but this kind of essentialism is avoided by Dtr (he acted in a “right” way in one dimension of his action [10:30], which is different).

Also, Lamb offers an astute but disputable answer to the objection that Dtr would not criticize the dynastic succession while insisting on the Nathan promise (2 Sam 7) and mentioning the one made to Jehu (2 Kgs 10:30). He argues that Dtr used them to explain the duration of these dynasties in spite of the behavior of the heirs. I fail to see how Dtr would seek to discredit the very means he insists God used on such a large scale in history. A theological explanation of the differences in handling the reigns of the Jehuite dynasty seems more congruent to Dtr interests: the distinctiveness of Jehu was his God-inspired action against Baal, which suffices to explain the special treatment he receives. Moreover, the mitigated evaluation pointed out by Wray Beal attenuates the differences with his heirs.

Furthermore, Lamb failed to notice a Dtr frame (2 Kgs 8:25–29; 10:28–36) bracketing the Jehu narratives (D. Nocquet, Le “livret noir de Baal” [Genève: Labor et Fides, 2004], 222–27). The first part of this frame might even be extended to 2 Kgs 8:20–29 (as I propose in Le testament d’Elisée. Texte massorétique et Septante en 2 Rois 13.10–14.16 [Cahiers de la Revue Biblique, Pendé: Gabalda, forthcoming], 50–51). Parallels between 2 Kgs 8:25–29 and 10:28–36 create a paradoxical contrast between, on the one hand, two Judean kings (Joram and Ahaziah) whose attitude resembles the apostate northern ones and who jeopardize the dynastic stability of Judah, and on the other hand a northern king (Jehu) whose yahwistic behavior is “rewarded” by an unexpected dynastic promise for Israel. This wider context for the Jehu narratives enhances the positive side of the Dtr evaluation of this king; as such, it might have fueled Lamb’s arguments.

Third, Lamb works on the basis of the Masoretic Text (MT) without discussing some significant differences present in the Septuagint (LXX). Of course, this shortcoming is not peculiar to his work since many scholars proceed directly to compositional criticism without paying much attention to textual criticism. And yet, there exists an important debate in recent research about the origins of the impressive differences between the proto-MT and the Vorlage of the LXX, which constitute two distinct Hebrew editions of Kings. (See the status quaestionis of P. Hugo, “Le Grec ancien des livres des Règnes: une histoire et un bilan de la recherché,” in Sôfer Mahîr: Essays in Honour of Adrian Schenker Offered by Editors of Biblia Hebraica Quinta [ed. Y. A. P. Goldman, A. van der Kooij, and R. D. Weis; VTSup 110; Leiden: Brill, 2006], 113–41.)

Regarding 2 Kgs 9–10 in particular, there are notable variants in the Antiochian text (LXXL) and in the Vetus Latina (VL), which are the best witnesses of the Old Greek (OG) in this section. To note but two of them: (1) Whereas, according to 2 Kgs 9:27 MT, Jehu is behind the murder of Ahaziah, in 2 Kgs 10:42 LXXL Jehu himself is the killer; (2) The VL contains an entire supplementary pericope, since in the Palimpsestus Vindobonensis 2 Kgs 13:14–21 MT lies between 2 Kgs 10:30 and 31. Accordingly, the last king speaking with Elisha is not Joash but Jehu! Among other consequences, this extends notably the Dtr frame mentioned above. (For a detailed comparison between MT and OG on this pericope, see Le testament d’Elisée, op. cit., 11–72.) Other differences are analyzed by A. Schenker, “L’iconoclasme de Jéhu. Comparaison du TM et de la LXX ancienne en 2 R 10:18–28,” in L’enfance de la Bible hébraïque (ed. A. Schenker and P. Hugo; Genève: Labor et Fides, 2005), 170–84. However surprising such differences might be, whether a given lesson in the MT or the OG reflects the oldest text should not be an a priori but a result of exegetical investigation.

In sum, this work leaves aside some important aspects of the text, and its main thesis does not seem persuasive to me. In particular, taking into account the whole of the data seems to lead to a more balanced and subtle biblical view of the colorful character of Jehu. But insofar as this view is twofold, this stimulating study constitutes the best analysis of the positive facet of Jehu’s Dtr evaluation. Every student or scholar working on the Jehu cycle will need to read and interact with this contribution to the debate, which highlights several previously ignored points. Moreover, it will incidentally be useful in other studies for its useful syntheses of various aspects of royal ideology in the ANE and in the OT.