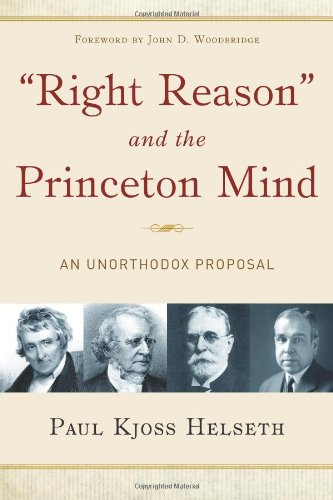 “Right Reason” and the Princeton Mind: An Unorthodox Proposal

Helseth’s work seeks to address and question the “historiographical consensus” of the “Old Princeton” theological approach to apologetics. While characterized as “an accommodation of theology to the epistemological assumptions of an essentially humanistic philosophy,” Helseth contends that the Princeton theologians have been mischaracterized and misunderstood (p. xxii). Against such misrepresentations, the present work contends that the Old Princeton religious epistemology focused more on the “heart” and holistic nature of the soul rather than just on scholastic rationalism or Enlightenment humanism.

Helseth characterizes his argument as “an unorthodox proposal,” built upon the foundation that historical analysis has overestimated the influence of Scottish Common Sense Realism among Old Princeton theologians. According to Helseth, not only was the Princeton theology and apologetic centered upon moral intellectualism rather than mere rationalism, but it was also squarely within the classical Reformed tradition. “Right Reason” and the Princeton Mind, thus, traces the epistemological assumptions of the Princeton apologetic, demonstrating its Reformed nature and the importance of “right reason” in the context of God’s sovereign grace and moral revelation to the regenerated knowing soul (p. xxxi).

Though by no means a bait-and-switch, “Right Reason” and the Princeton Mind focuses on far more than just the role of reason in the Old Princeton apologetic. While Helseth purports to be challenging the historiographical consensus of the Princeton theologians, he uses this unorthodox proposal to address the current debate over the evangelical theological enterprise. While Helseth aptly defends his thesis, the scope of his work reaches beyond the thesis. However, this does not detract from the quality and merits of the book. In fact, Helseth demonstrates how the historiographical question bears a direct correlation and application for contemporary theologians.

The book consists of two parts, the first of which focuses on the aforementioned question of the epistemological assumptions of the primary representatives of Old Princeton. The implications within this section, particularly chapter four, draw the reader from the historiographical question to its contemporary application and significance. Chapter one, “The Moral Context,” demonstrates how the Old Princeton epistemology dealt with the soul as a single unit and substance. Though they addressed the rational, they never divorced it from the subjective and experiential factors of the knowing soul. The Princeton apologetic emphasized the Reformed principle of the revealing work of God to the knowing agent who is both moral and rational.

Chapter two focuses upon the apologetic of B. B. Warfield. Helseth acknowledges that Warfield affirmed that a salvific understanding of God entailed the “rational appropriation of objective evidence” (p. 51). Yet the author demonstrates that this apprehension for Warfield occurred only through regeneration of the moral state of the soul. “Right reason” begins through the work of God in the soul of the knowing agent, not through a mere rationalistic apprehension of facts. Warfield’s apologetic, as Helseth illustrates further in the third chapter, focused not upon convincing souls into the kingdom, but on demonstrating the reality of God’s moral order to the unregenerate so as to encourage them to the intellectual place whereby they would be receptive to the Spirit’s regenerating, salvific work of the entire soul. Chapter four reinforces the aforementioned arguments by examining the apologetic of J. Gresham Machen. Helseth demonstrates the role of the subjective in the Old Princeton theology to serve as a transition to second half of his book. Machen’s critique of theological liberalism, Helseth believes, provides a foundation for the rebuttal of postconservative evangelicalism in demonstrating that both the Princeton theology and its conservative successors today rightly appropriate the subjective while maintaining the objectivity of God’s revelation.

Chapter five describes how postconservatives have widely accepted the historiographical consensus of the Princeton theologians and have employed the same critiques against contemporary conservative evangelicals. The author argues that by correcting the historiographical consensus of the Old Princeton Seminary, one may also defend against the same critique of conservative evangelicalism. Chapter six draws parallels between Old Princeton and conservative evangelicalism to demonstrate how their understanding of theological enterprise does not lead necessarily to “rigid dogmatism,” but allows for doctrinal diversity within the camp. Helseth stresses the necessity of the “heart” in both theologies and the role of the entire soul in “right reasoning.”

Chapter seven concludes by demonstrating the postconservative critique of conservative evangelicalism fails due to its misunderstanding and/or misrepresenting both the Old Princeton theology and its contemporary successors. Both parties certainly emphasize the objective nature of truth, and both also acknowledge, Helseth argues, the subjective and experiential factors in theological enterprise. Old Princeton theology and conservative evangelicalism both maintain that the message of the biblical witness must be apprehended through “right reason,” which for both parties is “a biblically informed kind of theological aesthetic that presupposes the work of the Spirit on the whole soul of the believing theologian” (p. 221).

“Right Reason” and the Princeton Mind is highly recommended for both historical and systematic theologians. Helseth’s meticulous research enables him to rightly represent the Old Princeton Seminary, acknowledging where the historiographical consensus has succeeded and failed. His gracious critiques, clear organization, and contemporary awareness enable the reader to follow his line of thought and reach the same conclusions. Helseth avoids attacking those he disagrees with, but rather offers a clear defense of the Reformed tradition and its twentieth-century and contemporary proponents. Though the content deviates from his articulated purposes, his masterful application and contemporary proposal rewards the reader nonetheless.