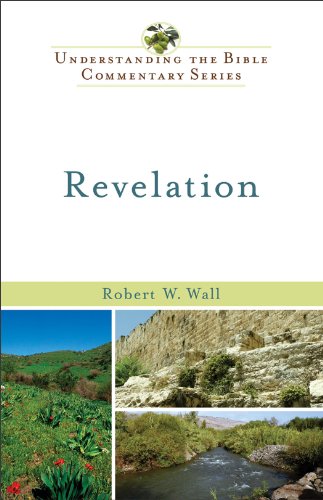 The introduction to this book is dominated by brief discussions of occasion, literary genre, canonization and history of interpretation. Wall is most interested in the last two subjects.

The occasion for the book was the crisis of Christians who were facing the question of how to form their embattled identity as the ‘true Israel’ in following Jesus as the true Messiah in a hostile Jewish-Gentile environment. In particular, the temptation was whether or not to understand ‘notions of power (ethics) and truth (theology) in secular terms—money and social status—rather than in spiritual terms’ (p. 11). With respect to literary genre, the forms of apocalypse, prophetic oracle and epistle are discussed together with an introductory discussion of the nature of symbolism.

Wall’s discussion of the canonization of Revelation and the history of its interpretation raises some significant hermeneutical issues. With respect to the former, he says that inspiration extends, not merely to the writers of the NT but also to the way the NT books were finally arranged in their present order (p. 29). However, no exegetical or theological grounding is offered for the notion that the final canonical order of books is also inspired. In addition, Wall believes that inspiration extends, not only to the writing of the canon and to the final order of the canon, but also to those who read the canon: ‘Not only does John write a book of inspired prophecy, but its reader is inspired by God in order to attain wisdom … God’s inspiring action, which transforms scriptural texts … is found at both their writing and their reading’ (p. 262). He bases the former contention on Revelation 22:6b, which affirms that ‘God rules over the spirits of prophets’ and which Wall plausibly affirms attests to the inspiration of Scripture. Wall also contends that the following clause, ‘blessed is he who keeps the words of the prophecy in this book’ in 22:7b, attests to the similar inspiration of the reader. However, Revelation 22:7b says nothing about inspiration, but only pertains to a ‘blessing’ people will receive for obeying the inspired Scripture of John’s book.

The introductory discussion of the history of Revelation’s interpretation is also problematic. Wall proposes that the biblical ‘author’s intent’ is not to be equated with the ‘canonical intent’ (p. 38; see p. 32): ‘the ultimate locus of meaning is the church’s situation in life, and not the author’s intended meaning, which is subordinate to its canonical intent’ (p. 39). This viewpoint appears to identify generally with the contemporary ‘reader-response’ hermeneutical perspective.

Regardless of whether or not the reader agrees with Wall’s views on canon and interpretation, benefit will be gained from a reading of the commentary section (222 pages). The commentary is a good one. Its English style flows smoothly. There is an attempt to pay attention to the OT background of significant OT allusions found in the Apocalypse (e.g. see the good analysis of OT background on pp. 84, 140, 142, 144, 193–194). The author also tries to discuss how the various sections of the book relate to one another logically, so that the reader gets a good sense of the flow of thought from segment to segment and from chapter to chapter. His focus on contextual exegesis is likewise a strong feature of the commentary (e.g. see his discussion of the ‘eternal gospel’ in 14:6, pp. 183–185). Especially insightful is the definition of what it means for the followers of the Lamb not to have ‘been defiled with women’ (Rev. 14:4, p. 180): the figurative significance of the depiction is that of believers persevering by not being influenced by Jezebel (2:20–22) and the Babylonian harlot (Rev. 17–18). The reader is repeatedly reminded of the occasion of the book and how the various sections serve as exhortations to the original readership to repent from compromise with the world (e.g. see p. 239).

In this respect, Wall well formulates what he calls the ‘big idea’ of the Apocalypse: ‘the community is exhorted to respond in faithfulness to God, confident that God’s victory has already taken place through the risen Christ; and it is exhorted to resist the Evil One whose agents rule over the anti-Christian kingdom (Babylon) in trust that God will destroy it and establish an eternal reign …’ (p. 99). Wall’s perceptive comment on John’s view of the real world is worth quoting: ‘To lose one’s life by resisting the norms and values of the anti-Christian kingdom and its rulers is actually to gain life; and the “real world” is the kingdom of God since it is the kingdom left standing at the end of the age’ (pp. 202–203). His definition of the second beast is superbly understood as referring to, not merely forces outside the Christian community, but ‘inside’ false teachers who take their ‘primary cues from the surrounding social order rather than from “the word of God …” ’ (p. 173). The modelling of the second beast (= ‘false prophet’ of 16:13) according to an apostolic pattern reveals its counterfeit nature (p. 172).

On the other hand, there are some areas of the commentary which need clarifying and which require more exegetical substantiation. Particularly troublesome from a theological viewpoint is Wall’s repeated contention that the true community of God is recognized and saved ‘by what it does and not by sola fide’ or by its ‘confession of faith’ (pp. 82–84; cf. also p. 271: ‘ “the Truth” consists not in a creed of theological convictions but in a life of devotion to God’). But this drives an unnecessary wedge between faith in an objective doctrinal gospel and good works which should necessarily flow from such a faith. This is the traditional Protestant understanding, which John’s Apocalypse does not contradict. The book emphasizes both faith in who Jesus is and a demonstration of such faith by being loyal and obedient to Jesus’ commands (cf. 5:9 and 6:9 with 19:6–7; cf. 12:11, where the believers’ ‘overcoming’ is based on ‘the blood of the Lamb’ and ‘their testimony’, as well as upon their ‘not loving their life to death’; similarly, 12:17 sees that genuine believers ‘keep the commandments of God and hold to the testimony of Jesus’ (the latter of which certainly includes belief in Christ’s death and resurrection for his people, see 1:5; 5:5–10; 7:14).

Wall consistently utilizes an inaugurated eschatological perspective in interpreting significant parts of the book. He sees that much of the book from chapters 4 to 21 pertains temporally to circumstances throughout the church age, beginning with the first-century church. This is a much-needed corrective to widespread, popular evangelical interpretations of the book, which typically relegate the majority of chapters 4–21 to only a time of future tribulation directly preceding Christ’s final coming.

However, Wall needs to adduce more exegetical analysis to support his contention. As it stands, it appears that he is working with a presupposition about inaugurated eschatology and merely affirming that his presupposition is better than an exclusively futuristic presupposition. For example, Wall affirms that the slain Lamb who is standing and who opens the scroll’s seals in Revelation 5 is a reference to Christ’s death, exaltation and beginning sovereign rule in the first century (pp. 100–101). However, he does not explain why this view is preferable to the futurist perspective that the chapter 5 vision depicts the Lamb being exalted in the future and setting in motion the ‘great tribulation’ at the very end of history (the same problem is also apparent in his explanation of Rev. 10, pp. 138–139).

At certain points Wall’s eschatological analysis is ‘over-realized’. In particular, he proposes that the description of Revelation 11:15–17, 19 explains realities immediately following Christ’s death and resurrection (pp. 152–155). However, as the majority of commentators agree, the wording of v. 18, as well as vv. 15–17 and v. 19, is most naturally taken as a depiction of the final judgment and final establishment of the divine Kingdom at the end of cosmic history (the only exception to this are a few post-millennialist commentators). For instance, the wording ‘the time came for the dead to be judged, and [the time came] to give their reward to Thy bondservants’ is usually understood (correctly in my view) as the final judgment of unbelievers and the final reward for believers at the end of the age.

Particularly disappointing was the discussion of the millennium, which was vague and did not interact adequately with the various major exegetical viewpoints on Revelation 20:1–6. Other interpretative questions concern passages which, on the surface, concern final judgment of the unrepentant, but Wall either construes them to be visions symbolizing redemption (see e.g. his view of the ‘four horsemen’ of 6:1–8, pp. 110–111) or visions primarily exhorting people to repent (see on 6:12–17 and 14:8–11). The result is a toning down of the judgment theme in the Apocalypse.

If another edition is published, then the typographical errors on pp. 92, 188 and 199 should be corrected.

Generally, despite the above caveats, Wall’s commentary is good. Readers will be able to glean numerous exegetical insights from it.