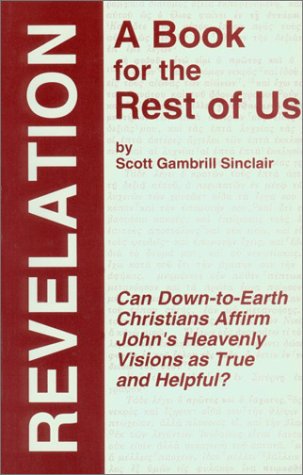 Revelation: A Book for the Rest of Us

It is refreshing to read a popular commentary on Revelation such as the one offered to us by Sinclair. He provides an informed, non-technical if not also pedestrian summary of the various ways the modern interpreter may approach Revelation to make meaning of it (Part One). His methodological interests are rather traditional and his analysis of the composition’s literary structure is familiar, as is his reconstruction of its point of origin (Part Two). Nicely put, but nothing new here.

It seems to me that Sinclair clearly struggles to integrate his historical and literary conclusions: what does the social world of its first readers, which stands behind the text of Revelation, have to do with its basic message, which is best illumined by its compositional architecture? What do the intentions of its author have to do with its continuing role in the life of today’s ‘down-to-earth Christians’, as Sinclair calls his lay audience? Sinclair contends that Revelation is written to persecuted and marginal believers, for whom faith has been made difficult to sustain within an increasingly hostile Roman environment. On the one hand, then, Revelation provides a commentary on those sufferings as the historic precipitate of a more cosmic and eternal battle between good and evil, between God and the Evil One. That is, the images of an embattled faith, so clearly reflected in the apocalyptic letters to the seven churches (Rev. 1–3) and in the book’s ‘unnumbered visions’ (Rev. 12–14; 19–20), interpret the source of the church’s suffering within a fallen cosmos. The images of divine judgment and ultimate triumph over evil and death, reflected in the book’s numbered visions (Rev. 6–11; 15–19; 21–22), interpret the redemptive conclusion to creation’s suffering. John’s pastoral message is made quite clear by this dialectic between the present and future, and between heaven and earth: the church’s present suffering on earth will give way to its future triumph from heaven. Those who remain faithful to God’s Word as embodied in the faithful testimony of Jesus Christ will participate in God’s coming triumph; those who refuse to repent and do not overcome evil will participate in the collapse and destruction of the old order. As such, John’s message comports well with the kerygma of earliest Christianity as reflected in the writings of the NT. The difference is that John presents his gospel message with the ‘special effects’ of the apocalyptic tradition. Nothing new or surprising about these conclusions.

While Sinclair’s exegesis made little impression on me, I found the last three parts of his exposition, where he moves from exegesis to interpretation, all the more interesting. I take it that his primary concern is with spiritual and social praxis, for he rightly supposes that the proper aim of interpretation is obedience: the meanings we give to biblical texts must finally be embodied in our worship of and witness to the Lord. In this light, he first speaks of the peculiar spirituality that shaped and is shaped by John’s Apocalypse (Part Three). Sinclair supposes that by its very nature visionary literature operates at two levels of meaning, one of which is literal and culturally conditioned and the other of which is spiritual and eternal in theological significance. At a literal level, Revelation is the author’s ‘translation’ of his personal encounter with divine reality, mediated by visions. Hearing the echoes of OT passages and of Roman institutions forms the basis of the exegete’s understanding of Revelation’s literal meaning and then provides the raw material for theological reflection. The aim of interpretation, then, is to recover John’s spiritual and eternal meaning hidden behind OT allusions and Roman references. The historically conditioned text of Revelation is but a path to a more mystical understanding of God’s glory that can be reappropriated for today. Whether or not we agree with Sinclair’s rather Alexandrian approach to John’s hermeneutics, we should applaud his attempt to understand John’s composition from the perspective of John’s hermeneutics. We should also applaud his general understanding of the hermeneutical task which aims at contemporary readers rather than at the first readers.

Of course, this begs the question whether John’s apprehension of the divine remains true and valuable for us today, which Sinclair takes up next (Part Four). His discussion reflects a post-modern bias, which more strictly limits truth and epistemic value to a particular system of ideas or convictions. Rather than evaluating the objective or universal truth quotient of Revelation’s claims about God, Sinclair is more interested in measuring the truth of Revelation’s theology by whether or not it is ‘Christian’. His conclusion is that it is thoroughly Christian and that while its message is sometimes silenced by the esoteric artistry of its expression, its content stripped of symbol comports well with the rest of the NT. Once the believer has the proper keys, the meaning of Revelation can be unlocked and enjoyed. Actually, I felt that Sinclair hedged a bit in accounting for the differences between Revelation’s Christology and eschatology and those found elsewhere in the NT. Once we determine the distinctive theological contribution Revelation makes within the biblical canon, the interpreter should go on to imagine what might be lost in our confession of God and our devotion to Christ if our Bibles came to us without Revelation.

Finally, and the most important contribution of this commentary, Sinclair turns his attention to the contribution Revelation makes to our understanding of Christian faith (Part Five). He nicely offers the suggestion that Revelation’s message is relevant to our own culture because John’s vision of human life is roughly analogous to our own historical, spiritual and psychological experience; and his hopeful message of the triumph of divine glory over human evil and suffering remains apropos in today’s climate where various Beasts still have power over the citizens who populate the various Babylons of our world. Revelation bids us out of this world, where the liberal myths of human progress and secular power are exposed as fictions, into the real world of God’s reign, where we are loved and remembered by name in fellowship with God and the Lamb. Such is the stuff that endures as gospel truth, for ‘salvation and glory and power belong to our God’ long after the smoke rises up from the ashes of the very last Babylon and Beast of human civilization (cf. Rev. 19:1–3).