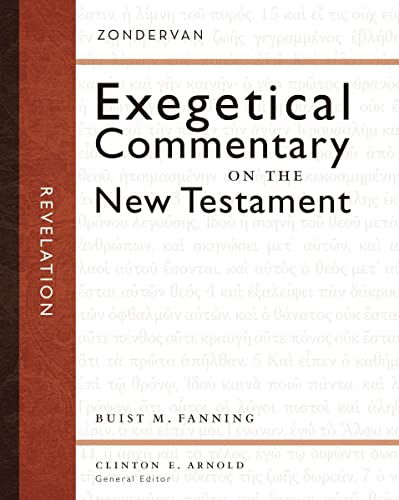 Buist M. Fanning, professor emeritus of New Testament at Dallas Theological Seminary, has contributed the volume on Revelation to the well-known Zondervan Exegetical Commentary series. The series, meant to be an accessible commentary on the Greek text, provides the student with detailed analysis of the Greek text of each verse but is also alert to structural and literary issues. Fanning’s work does this admirably.

Fanning begins with an introduction to the last book of the Bible that treats standard features such as authorship, date and setting, literary genre, Greek text and language, and other features particular to the book of Revelation, such as the interpretation of symbolism and the use of the OT. Regarding authorship, despite early testimony that John the apostle was Revelation’s author, Fanning opts for a prophet well-known to the churches in Asia Minor named John, who was influenced by the apostle. Based on external and internal evidence he favors a date in 95–98 AD under the reign of Domitian. Fanning recognizes the threefold genre of Revelation (apocalypse, prophecy, epistle), but privileges prophecy as the most central. For Fanning this means that we should expect a good measure of foretelling the future in judgment and salvation. A key feature of the way Revelations communicates is through symbolism. Fanning eschews the symbolic vs. literal divide and sees in Revelation instead a range of associations with both literal (referring to real persons, places, events, not only spiritual realities) and metaphorical (evocative and emotive) meanings. This means that there is an “earthiness” to Revelation’s eschatology. Furthermore, he is eclectic in his approach to interpreting Revelation’s visons, combining futurist, preterist, and idealist approaches, though his commentary makes it clear that a futurist approach is central.

Another key feature is his understanding of the sequencing of the book. While he allows for some foreshadowing and intensification between visions, he largely sees the literary sequence as indicating a chronological sequence. However, at times he places too much weight on the mere presence of “I saw” as indicating the sequencing in the “chronological storyline” (p. 499), rather than only telling us the sequence in which John saw the visions.

Crucial for Fanning’s approach to interpreting the Apocalypse is his understanding of Revelation’s use of the OT. His approach to how John uses the OT can be characterized as typological. Types and patterns in the OT find their escalated fulfillment in Revelation’s visions. The clearest example that Fanning finds is the Exodus plagues typologically anticipating God’s end-time judgments in Revelation 8–9, 16. A typological approach also explains how a vision can have a fulfillment in the first century Roman context, but a further, future one at the second coming of Christ. Thus, the seal judgments in Revelation 6 are primarily references to God’s climactic judgments in the end times, though patterns of these judgments could occur throughout history as a pointer to the climactic judgments. The vision of Babylon and its destruction in Revelation 17–18 has significance both for John’s time and for the future world empire that will exist at the second coming of Christ. One issue with this approach is how the reader of the visions discerns what is fulfilled in the first century, and what can only find a climactic fulfillment at the end of history.

Overall, Fanning’s interpretive approach to Revelation could be described as a modified futurist-dispensational one. Without subscribing to a strict literalism, Fanning still wishes to see the OT prophecies of the restoration of Israel to the land maintaining their integrity and finding straightforward fulfillment, giving the OT contexts priority. Therefore, the 144,000 sealed in Rev 7:1–8 refer to the restoration of a group within ethnic Israel and should be distinguished from the “great multitude” in vv. 9–17. In my view, this approach, while rightly emphasizing the physical, earthly nature of the promises of restoration, does not take seriously enough the application of the OT texts of restoration to both Jew and Gentile, in the present and future, throughout Revelation. Thus, in Revelation 21–22 all the major promises of the restoration of Israel in the OT find fulfillment in the New Creation in a people consisting of both Israel and the church (which is given a foundational role in the end-time restoration).

A key feature for Fanning’s approach is the millennium in Revelation 20:1–6. He sees this as a penultimate stage in the fulfillment of the OT promises of a coming messianic kingdom, with the ultimate fulfillment in Revelation 21–22. The millennium, for Fanning as with other dispensationalists, is where God’s promises of the defeat of God’s enemies and the restoration of his people and Christ’s reign from Jerusalem will be fulfilled. However, I do not think this takes seriously enough the observation that there are virtually no OT allusions in 20:1–6 to the restoration of Israel to their land and a universal reign from Jerusalem. The vision of the New Creation and New Jerusalem is saturated with OT prophetic texts of restoration of Israel, Jerusalem, the temple, and the reigning Messiah. In my view this supports an initial fulfillment at the coming, death, and resurrection of Christ, followed by only one future fulfillment at the second coming. While the NT (including Revelation) sees an initial and a future fulfillment of OT promises corresponding to the first and second comings of Christ, this does not justify seeing multiple stages of fulfillment at the second coming of Christ.

Fanning’s work has numerous helpful grammatical comments in the footnotes, and his applications are sound and very helpful for preaching. Overall, this is probably the best commentary from a futurist, dispensational perspective. Even those that do not share this perspective will find much that is of value in Fanning’s careful analysis.