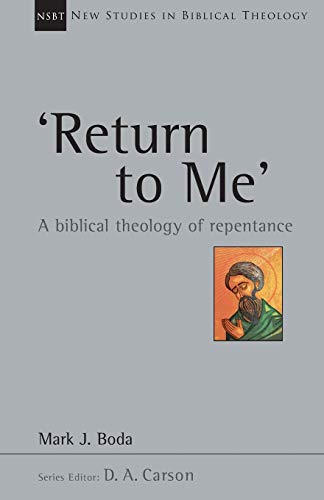 ‘Return to Me’: A Biblical Theology of Repentance

The author, a professor of Old Testament at McMaster Divinity College in Hamilton, Ontario (Canada), takes the reader through the biblical texts concerned with repentance. Briefly defined, repentance refers “foremost to a turn or return to faithful relationship with God from a former state of estrangement” (p. 31). He initially introduces the primary Hebrew and Greek vocabulary for repentance, but notes sensibly that the subject matter is also present in texts where the terminology does not occur. One advantage of this starting point is that, in discussing various texts throughout the canon, he will often indicate some of the Hebrew and Greek vocabulary upon which the English translation is based and readers can gain some sense of the range and frequency of the biblical terminology. His presentation, however, is not a series of word studies. The majority of the chapters in the book deal with a segment of the canon, where relevant texts are identified and then briefly examined. Boda is an accomplished and experienced exegete of texts. Brief and discerning exegesis is the primary means in this volume of “taking a reader through” the text. Chapter 2, for example, concerns the Torah, with thematic and exegetical remarks on texts in Genesis through Deuteronomy. The rest of the Old Testament is subsequently examined in nine chapters. Texts and concepts from the New Testament are examined in two chapters, with a final chapter in the volume titled “Theological Implications of Repentance” (pp. 191–98).

Boda demonstrates that there are various facets to the matter of repentance in the Bible, including behavioral modification, ritual enactment, and inner dispositional change. No one text encompasses all the dimensions of what at its core is a supremely relational concept. He is at his best reflecting on individual texts, identifying nuance and particularity, while also placing them carefully in broader thematic patterns in the canonical witness. He points out, for example, that in the Torah, repentance is particularly associated with the threat of exile for covenant disobedience. In the Former Prophets, he underscores the importance of penitence, and in the Latter Prophets shows that penitence proves inadequate apart from divine initiative in overcoming human failure. In particular, his detailed treatments of God’s work on Israel’s collective “heart” in Jeremiah and Ezekiel repay careful attention (pp. 79–93).

One of the book’s strong points is a summary statement with each chapter, keeping the reader focused on the larger interpretive enterprise while digesting exegetical detail. At the conclusion of his investigations of Old Testament texts, the author provides a summary chapter on repentance in Old Testament theology, using some thematic headings that reappear in a corresponding chapter on repentance in New Testament theology. This is yet another way in which he takes the reader through the biblical text. These summaries map out what he calls “redemptive-historical development” (p. 145) in the canon as well as reasons for seeing continuity of action and purpose in the two Testaments. The New Testament, he claims, “resonates with the holistic penitential vision of the Old Testament” (p. 182) and in light of climactic redemptive events (i.e., cross and resurrection) assumes the necessity of repentance on the part of those rightly related to God. He also shows that both Testaments have occasions where God’s judgment “disables” human repentance as well as those where God “enables” human repentance (pp. 157–59, 188–89).

As the book’s title implies, the repentance under examination is that of human beings before God. God’s own “repentance” or “relenting” in relating to humans is also part of the biblical tradition (e.g. Jer 18:7–10; Jon 3:6–10). That is, God is subject of the same verbs (e.g., נחם, שׁוב) for a change in action or thought as are human beings. Boda acknowledges this aspect of the topic (p. 31), but chooses not to address it directly. His comments on pp. 26–27 might indicate his approach to the matter, and I, for one, would have appreciated more of his thoughts on it.

The author stands broadly in the Reformation tradition of western Christianity and his conclusions are consistent with it. His presentation is not, however, intended to sharpen sectarian debate, but to sharpen humility and trust in God. Consider in closing, for example, these two statements from his concluding chapter, both of which also acknowledge that repentance cannot be dealt with in a formulaic manner:

What is clear is that repentance lies at the core of the gospel message. Repentance is key at the outset of Christian experience with God, but it is also part of the enduring spiritual rhythm of life with the triune God. Repentance is a human act, but according to the biblical witness relies upon divine resources. There is mystery in how this works theologically and psychologically. (p. 192).

It is also helpful to remember the repentance of Job on behalf of the wisdom tradition that systematized sin, suffering and repentance and foolishly claims the sort of knowledge of good and evil only God possesses. We must know our place before our Creator, a posture of childlike humility in God’s kingdom (Mark 10:13–16) that acknowledges it does not have all the answers (p. 196).

Boda’s book will serve pastors and scholars well in showing that repentance is neither mechanical nor forced upon people in the Bible’s presentation; rather, it springs from a deeply personal encounter between sinful people and a holy God.