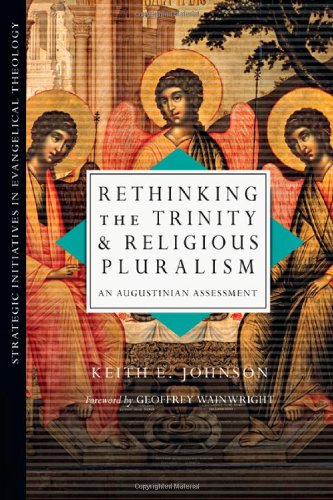 Rethinking the Trinity and Religious Pluralism: An Augustinian Assessment

Written by Keith E. Johnson Reviewed By James A. Andrews
Mission and Culture

In this book, Johnson sets out to evaluate the now-common claim that the doctrine of the Trinity “provides the basis for a positive appraisal of non-Christian religions” (p. 18), and to do so, he appeals to the trinitarian thought of St. Augustine. Following the introductory chapters, the book places Augustine's thought into dialogue with four contemporary theologians, in each case demonstrating how the particular theologian's thought is deficiently trinitarian; each chapter summarizes the main points of a major work by the theologian, followed by a discussion of Augustine's trinitarian theology, and ending with “an Augustinian evaluation.” The book concludes with a more wide-ranging discussion concerning the use of the doctrine of the Trinity in contemporary theology. There is also an appendix, which demonstrates the inaccuracy of certain criticisms of Augustine in contemporary theology, focusing on Colin Gunton. It is a bold book, seeking to cover so much ground, and it is to Johnson's credit that he manages to do so with considerable clarity.

The first two chapters orient the reader to current discussions. First, Johnson summarizes Karl Barth and Karl Rahner to demonstrate the revival of trinitarian thought in the twentieth century, and then he discusses the Christian theology of religions and its turn to the doctrine of the Trinity. The second chapter briefly summarizes Augustine's trinitarian theology, focusing on De trinitate. Johnson does so primarily through engaging with recent historical work by Michel Barnes and Lewis Ayres. These two chapters do not break new ground, but the material will provide students with a good introduction to the major issues.

Chapter 3 engages with S. Mark Heim's theology of “alternative religious ends.” Christian salvation, according to Heim, is only one possibility; other religions offer different, distinct ends, and these can be seen as valid, though not complete, ways of relating to the triune God. In response to Heim, Johnson argues—using Augustine's discussion of the temporal missions of the Son and the Spirit in De trinitate 1-4—that Heim leaves behind the scriptural witness, speculating about the immanent Trinity and sundering the single economy of salvation, a single economy with two “sendings” (the Son and the Spirit). Ultimately, Johnson argues, Heim's account severs the economic from the immanent Trinity.

Chapter 4 engages with Amos Yong and Jacques Dupuis, arguing that both have deficient accounts of the relations among the divine persons. Yong, Johnson argues, posits two economies, one of the Son and one of the Spirit. Likewise, Dupuis implicitly posits two economies (that of the Logos ensarkos and the Logos asarkos) (p. 133). In opposition, Johnson appeals to Augustine's discussion of the relations of the divine persons in De trinitate 1-7 (as well as Sermo 52 and In Iohannis evangelium tractatus 20), arguing that Augustine's trinitarian thought does not allow multiple economies. In a nice turn of phrase, he states that Yong “severs the 'two hands' of the Father” (p. 121).

Chapter 5 engages with the theology of Raimundo Panikkar. Following Ewert Cousins, Johnson connects Panikkar to the vestige tradition and argues,”Panikkar violates the basic grammar of the vestige tradition by reinterpreting the doctrine of the Trinity on the basis of non-Christian religious experience” (p. 156). In contrast, Scripture guides Augustine's discussion and moves him to see the imago dei in the human mind, and furthermore, because of the creator-creature distinction, Augustine is clear that one cannot make inferences about God from the image. Johnson argues that—even granting that non-Christian religious experience represents a vestigium trinitatis—there is “no epistemic warrant” to reinterpret the doctrine of the Trinity in light of it, nor is there warrant for affirming the “salvific validity” of other religions (p. 183).

The final chapter concludes that the four theologians “reinterpret trinitarian doctrine in order to support their constructive accounts of religious diversity” because they are under pressure “to accommodate religious pluralism” (p. 188). Johnson's constructive solution is to recognize that other theological loci are more helpful for discussing other religions. He suggests developing an anthropology that addresses the doctrines of creation, fall, and redemption (p. 190). This emphasis on a network of theological loci is the work's most interesting point.

In sum, Johnson's book helpfully demonstrates the pitfalls of certain forms of the Christian theology of religions, and it shows how helpful a nuanced account of Augustine's doctrine of the Trinity can be.

I would like now to conclude with two connected methodological points for further discussion. First, the appeal to Augustine is a highlight of the work, but is it enough simply to recite Augustine's trinitarian doctrine—foundational as it may be—and expect it to say the same thing in our time as it did in his? One need only compare Barth's hesitancy over the use of person-language for Father, Son, and Holy Spirit to see the point. Certainly there are good grounds to continue to use such language, but it is not enough to state that we should because Augustine did. The deeper question, then, is this: can the theology of Heim et al. offer anything to the trinitarian theology of Augustine, leading us perhaps to adjust it in some way?

Second, Johnson does well to demonstrate flaws in the works of the four theologians he considers, and his point is explicitly narrow: to demonstrate how their appeal to trinitarian doctrine is problematic. Still, I was left wanting more. Certainly we want the doctrine of the Trinity to be coordinated with other doctrines, but can the dialogue between Augustine and these theologians lead to positive theological construction? For instance, in light of our more global society—something to which these theologians have helped draw our attention—we might want to say something about the Spirit blowing where he wishes (though always as part of the single economy of God revealed in Christ). Perhaps, as these theologians contend, we may venture to suggest that the Spirit very well may choose to speak to the church through other religions. Certainly we want to test what we hear against the normative authority of Scripture, but to my mind such a move does not necessarily posit a second economy, and in fact, when appealing to the two “sendings,” it could provide a useful vocabulary for discussing the positive contributions to Christian theology that dialogue with other religions might provide.

By demonstrating how recent proponents of theology of religions are at times deficient in their trinitarian theologies, Johnson has laid the groundwork for a nuanced account of other religions that appeals to numerous doctrines. In the process, he has demonstrated how a good understanding of Augustine helps address a multitude of problems. For these things, the book should be commended.