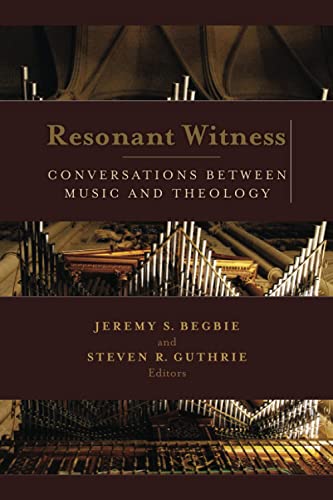 This publishes the anticipated proceedings of the 2002 Music and Theology Colloquium, jointly coordinated by the “Theology through the Arts” project at the University of St Andrews and the Calvin Institute of Christian Worship at Calvin College. The book collects seventeen chapters written by theologians, musicologists, and music practitioners, only two of which have appeared in earlier publications. Insofar as this is a theological endeavor, all participants adopt a “broad perspective of Christian Trinitarian orthodoxy, grounded in Scripture and classically expressed in the church's ecumenical creeds” (p. 9).

Both the colloquium and volume share the self-conscious aim “to demonstrate the fruitfulness of theology for music, and the fruitfulness of music for theology, with a view to encouraging sustained engagements between musicians and theologians in the future” (p. 4). Jeremy Begbie's introduction provides access into the volume. He defines music as an embodied practice concerned with music-making and music-hearing, and he stresses the importance of multidisciplinary and multileveled approaches to musical engagement. Theology might enrich music by looking at either particular instances of music or the processes involved in the act of music given what is revealed in the Christian proclamation. Alternatively, a look at these instances and processes might enrich theology's interaction with God, the church, and the world at large. Among the challenges of this interdisciplinary endeavor, however, is the temptation to abuse music through a theological instrumentalism or elevate it in an act of theological aestheticism that reduces theological significance to a musical norm. Theology's “pressure of interpretation” must flow “from the decisive self-communication of God in the history of Israel culminating in Jesus Christ” (p. 13).

The book's first section, “Music and Cosmos,” pertains to various relationships between God, music, and the rest of creation that theological discourse has articulated. Carol Harrison's reading of Augustine's De Musica sets the stage for this examination through a detailed exegesis of Book 6. Music is “an art that must be practiced in every moment of a creature's existence if it is to remain in right relation to God and not fall back into non-being” (p. 31). Against previous interpretations, Harrison argues that Augustine believes temporal events of music should be enjoyed in their usefulness as physically embodied manifestations that point to their source, helping to reorient creatures towards their end in the triune God.

The remaining four chapters in this section mark progressions in Christian thought concerning the music-cosmos relation after Augustine. Nancy van Deusen addresses the material values of music articulated by medieval poet-theologian Philip the Chancellor through his studies of Aristotle's Physics. Joyce Irwin overviews the relationship between music and God's Word articulated in sixteenth- and seventeenth-century German Lutheranism, followed by Begbie's chapter arguing from the work of the Lutheran composer J. S. Bach for a sense of cosmic beauty brought to light through artistic formation. John Paul Ito concludes the section by attempting to reconstruct a Pythagorean relation between music, mathematics, and theology in light of modernity.

The second section, “Music and Culture,” focuses on the significance of theology for culturally embedded aspects of music. Daniel Chua finds modernity bound to a secular theology locating its identity against the notion of God and depending on residual theological structures to express itself. He explicates the significance of Galileo's father, Vincenzo Galilei, for both the disenchantment of the modern world and the sixteenth-century attempt to humanly re-enchant the world through Opera: “to dis-enchant the world is literally to leave it un-sung. Opera sings in an unsung world as nostalgia for an ancient age enchanted by music” (p. 144). Having abandoned a theology of divine creation, humanity was left to waft between a godless materialism and self-deifying idealism. Chua exemplifies this meaninglessness of existence with the work of Rameau, Rousseau, Kant, and Romantic composers' Promethean attempts at creatio ex nihilo, and proposes that theology might restore a meaningful relationship between the supernatural and natural realms for music by substituting a relational emphasis on Trinitarian love in place of the rational emphasis of modernism.

The following two chapters in this section concern the twentieth-century Roman Catholic composer Olivier Messiaen. Robert Sholl's chapter applauds Messiaen for his use of modernist compositional technique to recontextualize the “negative shock” prevalent within modernist composition into a “positive shock” of grace that God might use to call humanity to himself. However, Catherine Pickstock's chapter is critical of Messiaen insofar as she finds his work too modern in its dismissal of narrative and history, after which she then explicates the merits of more postmodern compositional attempts she finds to strike a more constructive sense of musical grace and hope.

The third section, “Music and Theology,” offers formal theological engagements with instances and processes of music as theological texts. David Moseley's chapter compares Barth and Bonhoeffer on music's ability to bear witness to Christ. Noting Bonhoeffer's criticism of Barth's supposed Offenbarungspositivismus (positivism of revelation) and Barth's bewildered response to this accusation, Moseley focuses his essay on the aspects of each theologian's account that he finds to closely correlate. As each theologian was musically trained, Moseley begins with biographical accounts of each theologian's musical development before enumerating the views outlined in their theological texts. Moseley argues that although Barth does not provide examples of the secular “parables of the kingdom” he says are possible (CD IV/3.1), a horizontal reading of this text with Barth's work on Mozart (written concomitant with the 1955-1956 lectures that informed CD IV/3.1) provides good reason to believe Barth found Mozart's music to be a possible secular parable witnessing to Christ. If this is true, and Barth's parables take musical form, Moseley shows how a great resonance is seen between these parables and the witnessing function at work in Bonhoeffer's conception of the “polyphony of life.”

The other chapters in this section continue the engagement with music as theological text. Richard Plantinga interacts with J. S. Bach's vocal compositions, and after arguing for the legitimacy of Barth's Lutheran identity, locates in his passions an intricate collaboration of music and word that conveys an overtly Lutheran understanding of death. While distancing itself from a natural theology, Alastair Borthwick, Trevor Hart, and Anthony Monti's chapter engages in a theology of nature and examines the nature of time in the work of the composer Gustav Mahler alongside other non-religious modernist compositions, considering the way these models might be helpful in a Christian engagement with eschatological issues. Bruce Ellis Benson's chapter details a specific understanding of the improvisatory nature of scriptural interpretation.

The final section, “Music and Worship,” details specifically worship-related issues. Steven Guthrie exegetes Eph 5 and Col 3 with the hope to erase the harmful bifurcation of an emotional “worship time” and intellectual “teaching time” prevalent within contemporary churches. Guthrie finds that the specific mention of song in Ephesians is often divested of theological significance. However, he argues that a proper understanding of the grammatical structure at work in this passage testifies to the importance of corporate song for the Spirit's work in strengthening church unity and growth in the knowledge of God. Guthrie further suggests that reflection on what is at work in the act of singing will help the church mature in this knowledge, and he concludes with an address of practical concerns related to church music.

The rest of the chapters in this section interact with the emotional aspects of music and worship. Begbie's chapter contrasts with Guthrie's work, as he looks at the theological value of music's ability to educate and focus human emotional participation and at the significance this holds for participation in Trinitarian worship through Christ as High Priest. Medieval theological interaction with emotion and music is further explored in Margot Fassler's chapter on the composer-theologian Hildegard of Bingen, whose work utilizes texts from Song of Songs and Revelation alongside extra-biblical metaphor and erotic imagery to explore human and divine love. Michael Hawn's chapter draws attention to a theological sense of belonging established through the corporate singing of African freedom songs. In light of Heb 2:12, Michael O'Conner concludes the section with a survey of Christian tradition depicting Jesus in song, and suggests the significance of the corporate singing of Christ and his saints in the new creation.

Overall, this volume proves a valuable read for both academic and practical interest in the intersection of theology and music. Like any interdisciplinary endeavor, the growing discipline of “theology and the arts” faces challenges, not least that of sorting out who asks its questions, what questions they ask, and how they intend to ask and answer them. Hence one should expect this volume to have a wide and varied authorship and not be surprised if it sometimes leaves its readership unsure of its unifying features. Admitting this ambiguity is not to criticize the existence of such volumes as much as to encourage readers who value musico-theological discussion to share in this challenge.

The division of the volume into four sections is helpful insofar as it orients readers towards possible ways of relating the chapters, as is the fact that several of the authors comment on other chapters in the volume-both of these are benefits of participating in the published form of the colloquium. An extensive glossary of music terms is especially convenient for less musically trained readers, and the musically literate may value the inclusion of relevant fragments from the scores discussed. Most of this volume's contributors avoid an overly-autobiographical approach to their chapters and offer interesting projects that are well-defended given the terms they supply. While some offer more developed theological conclusions than others, all demonstrate a commitment to orthodox Christianity alongside a commitment to respect the musical instance or process they choose to explore. Many of the conclusions rely on a vocabulary of words like “resonance,” “fruitfulness,” and “givenness” to establish the connections they find, but this seems to demonstrate an appropriate humility more than a lack of thought and source, as well as to evidence their place in a developing field.