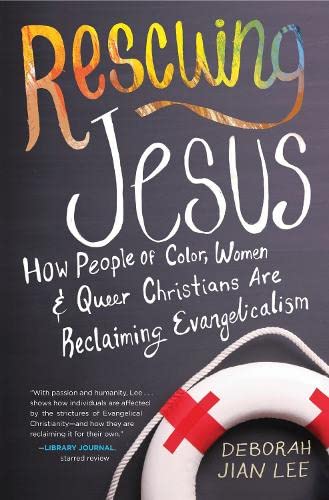 Rescuing Jesus: How People of Color, Women and Queer Christians Are Reclaiming Evangelicalism

In 2012, historian David Swartz, published Moral Minority: The Evangelical Left in an Age of Conservatism (Philadelphia, University of Pennsylvania Press), which documented the beginnings of the Evangelical Left, sometimes known as “progressive evangelicalism.” Following his lead, journalist Deborah Jian Lee continues the story in Rescuing Jesus: How People of Color, Women and Queer Christians are Reclaiming Evangelicalism. In engaging journalistic prose, Lee offers readers a picture of progressive evangelicalism’s status today and how far it has come in championing its race-reconciling, egalitarian, and LGBTQ-affirming values.

Lee includes a few anecdotes from her own personal history as a former evangelical and fills in some helpful historical background from secondary sources. What drives the book, however, are the stories of leading progressive evangelicals. The narrative that she presents in three sections is a journey that starts from their “conformist” beginnings within the evangelical world, moves on toward an uneasy “skeptic” phase, and then finally proceeds to their transformation as “radical” change-advocating leaders of the progressive evangelical cause.

The first chapter of each section centers on the theme of race. They focus on the story of Lisa Sharon Harper. Lisa hails from an African American family with Democratic values and a history of civil rights advocacy. However, when she became a Christian at an evangelical youth group, she learned that “being Christian and Republican was a package deal” (p. 18). Hence, Lisa early on came to embrace many of the values of the Religious Right. At one point, when Lisa’s mother, shared with Lisa that she had an abortion when a recent pregnancy threatened her survival, Lisa looked her mother in the eye and responded: “They should have saved the baby” (p. 30). Rescuing Jesus tells the story of how Lisa came to regret this moment in her life. It recounts how she realized that her 4-Spiritual Laws Christianity, complete with anti-abortion activism, was far too small. It details how she switched her focus from abortion to homelessness and racial injustice. Today, Lisa is known as the founding executive director of New York Faith and Justice, Sojourners’ Chief Church Engagement Officer, and the co-author of Left, Right and Christ (Boise: Elevate, 2012) and author of The Very Good Gospel: How Everything Wrong Can Be Made Right (Colorado Springs: WaterBrook, 2016).

The second chapter of each section focuses on the theme of gender, featuring the journey of Jennifer Crumpton. Jennifer grew up in the American South where “traditional gender roles” were constantly reinforced at home, in the wider society, and especially in the church. Jennifer recalls being perplexed and frustrated living in what appeared to be a world that preferred men. Still, she found herself constantly trying to live up to its demands. She competed in beauty pageants that subjected her to various constructed gender expectations. She grew up in a purity culture in which she felt partially at fault when she got raped by her boyfriend. And she was even called a whore by her “wholesome” Christian husband. Eventually, Jennifer had enough of that world’s gender norms.

Leaving the South for New York, Crumpton became interested in (feminist) theology and desired to attend seminary. She painfully recalls her visit to David Platt’s Southern Baptist church, where he argued against the nomination of women deacons and elders. Feeling unsatisfied with Tim Keller’s advice to take his seminary-like classes and not attend the outrageously liberal Union Theologically Seminary, Crumpton decided to enroll at Union anyway. Today, Reverend Crumpton has found a voice advancing feminist values in the evangelical world. She is known for her book Femmevangelical: The Modern Girl’s Guide to the Good News (St. Louis: Chalice, 2015), contributes to numerous publications, and has also featured as a media commentator on FOX and CNN.

The third chapter of each part takes the reader into the Biola Queer Underground (BQU) and the emergence of LGBTQ-affirming evangelicals. BQU was started by two LGBTQ-affirming Christians, Will Haggerty and Tasha Magness, to offer a warm and private place of belonging and support for other LGBTQ students at Biola. It. Growing up in evangelical churches, most of these students learned that homosexuality is a sin. Although they came to recognize their attractions to those of like sexes early on, they still very much valued their evangelical upbringings. To them, Biola seemed like the perfect fit. However, Biola would not prove to be a place of great comfort. A handful of Biola students felt unsafe disclosing their sexual preferences there. In chapters 3, 6, and 9, Lee tells the story of BQU, its members, and how it made waves on Biola’s campus, especially with the BQU Yearbook.

Let the reader be aware that Lee is a self-proclaimed ex-evangelical who does not share the same presuppositions as TGC and Themelios. The greatest strength of Rescuing Jesus is also a weakness. With its incredibly personal style, it does not read like an unbiased report on the progressive evangelical movement nor a carefully argued defense of its convictions on race, gender, and sexuality. Readers looking to engage the convictions of progressive evangelicalism at the level of biblical and theological arguments will be dissatisfied. Instead, Lee effectively presents people’s personal transformation stories. This is valuable because, after all, people’s transformations are rarely a matter of mere biblical and theological arguments.

Additionally, her disagreements with conservative evangelicals can come across as uncharitable and intolerant. For example, Lee comments on Cru’s decision to launch its urban mission program in addition to its previous anti-abortion activity. She offhandedly describes this as an “unintentional” merging of the Religious Right’s agenda with progressive evangelicalism (p. 38). She says this like she knows Cru’s motive and as if it were impossible for those sympathetic with the Religious Right’s agenda to also care about the poor.

Lee tends to promote the liberal ethos of popular secular discourse: intolerant tolerance. She does not concede that conservative evangelicals have made significant strides toward loving and embracing those with same-sex attraction. For Lee, any attempt to love homosexuals that does not include condoning homosexual intercourse is “back-handed compassion” (p. 150). She supposes it is impossible to uphold the historic majority position on homosexuality in the Christian church and to genuinely love homosexuals. Furthermore, the stories of reprehensible evangelical behavior that Lee tells surely do not represent the best of evangelicalism. Rather, her examples seem to represent the nominal and cultural Christianity that has crept into much of evangelicalism.

All in all, I commend this book to anyone interested in the status of progressive evangelicalism in America. Lee tells stories in a personal and engaging way. Her interviews offer a wonderful window into the lives of real people struggling to make sense of their evangelical faith and the world. Since Lee does not write as a complete outsider, I often found myself smiling when Lee accurately described various elements from the American evangelical subculture.

At the same time, I read this book with a heavy heart. Rescuing Jesus is filled with stories recounting the regrettable and cringe-inducing behavior of professing Christians. There was the social alienation that Lisa experienced in her campus fellowship because her passion for combating homelessness and injustice against blacks surpassed her previous anti-abortion fervor. There was the sexual and verbal abuse that Jennifer almost believed she deserved because of her lack of a Y-chromosome. And there was the parental withdrawal of Will Haggerty’s tuition, computer, and car because he continued to participate with BQU at Biola. Personally, Rescuing Jesus led me to repent, as I recalled various moments during my high school and college days when I affirmed some of the grievously insensitive attitudes and postures described in this book. For these reasons, I heartily recommend Rescuing Jesus. Conservative evangelicals will significantly disagree with much in this book; yet, we are reminded that we can and must do better.