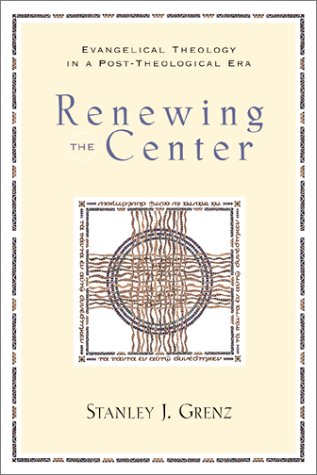 Questions raised by postmodern thought have forced theologians to re-examine theological method. This volume by Stanley Grenz offers a challenging approach to doing evangelical theology in the light of such postmodern concerns.

The book consists of ten chapters. The first four examine the historical developments of evangelicalism. In analysing its development Grenz covers familiar ground from the Reformation through to the emergence of the neo-evangelical movement in the 1940s.

In chapters 3, 4 and 5, Grenz pays particular attention to the first fifty years of neo-evangelicalism and contrasts three pairs of seminal thinkers within the movement, bringing the reader up to the present day. C.F. Henry and Bernard Ramm are the first generation neo-evangelicals whose thought represents two very different strands within the evangelical tradition. Next Millard Erickson and Clark Pinnock are examine and judged by Grenz to have taken the mantles of Henry and Ramm respectively Finally, in chapter 5 Grenz puts forward Wayne Grudem and John Sanders as the successors to Erickson and Pinnock. The purpose for drawing such comparisons is to illustrate the different directions that evangelical theology has taken. The theology of Ramm, Pinnock and Sanders being more irenic and culturally engaging than that generally proposed by the other three. It is this irenic approach that Grenz clearly favours.

This sets the stage for his own proposals which he explicates in chapter 6 and it forms the central part of the book. Grenz first examines what he sees to be the demise of foundationalism and the consequences that this has for doing theology. Consequently, he seeks to embark on a quest for an alternative epistemology. Drawing on Pannenberg, Lindbeck and the reformed epistemology of Plantinga and Wolterstorff, Grenz argues for a complete restructuring of evangelical theological method. He takes seriously the experience-forming dimension of interpretative frameworks and uses a Christian framework to do theology. There are many Christian frameworks that are rooted in particular understandings of the Christian theological vision (204). These different understandings make up what Grenz terms the ‘belief mosaic’ (205) or ‘web of belief’. Christian communities although having different interpretative frameworks are interrelated by the very fact that they are Christian. This coherentist approach provides an alternative, in Grenz’s view, to the foundationalist epistemology that postmodern thought is so at odds with. Theology is situation and community specific and should be viewed as an ongoing conversation within each community. This approach takes seriously postmodern sensitivities in view of the demise of foundationalism.

In chapter 7, Grenz examines the conversation taking place between theology and science and moves from the realm of epistemology in the previous chapter to discuss ontological issues. Chapter 8 focuses upon the issue of ‘truth’. Drawing from conclusions reached in chapter 6, Grenz argues for a non-foundationalist theology that develops through the ‘interpretative frameworks which various Christian communities adopt. This enables their own understanding of what is important and true to develop accordingly.

The orthodoxy Grenz argues for may 5 prove to be too generous for some evangelicals, particularly in relation to questions concerning the nature of truth and the role of Scripture. Grenz seems to go too far in his accommodation of postmodernism. Overall however, I think this is a timely and positive contribution to a subject which has been neglected for too long.