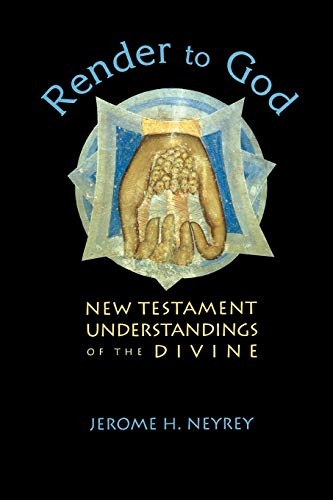 RENDER TO GOD: NEW TESTAMENT UNDERSTANDINGS OF THE DIVINE

This book is a study on the much neglected concept of God in the NT, and is an excellent example of the use of social sciences biblical studies. Neyrey found three social-science models particularly helpful in redressing this neglect of God: (i) patron-broker-client relationship, (ii) honour and shame; (iii) purity and holiness. Rather than attempting to produce an overall systematic NT theology of God, Neyrey (rightly) listens to the main authors separately and, drawing on Jewish and Graeco-Roman materials, examines the diverse ways in which NT authors render to God the things that are God’s, which also explains the plural ‘New Testament Understandings’ in the subtitle. The book contains eight chapters (on Mark, Matthew, Acts, Romans, 1 Corinthians, Galatians, John, Hebrews), a conclusion, and three helpful appendices for readers who are unfamiliar with social sciences.

In the first three chapters, Neyrey argues that the God-talk of Mark, Matthew and Acts is primarily of a God-in-relationship, understood in the light of patron-client relationships. Neyrey uses the four basic goods and services of Talcott Parsons’ model (power, commitment, inducement, influence) to analyze the relationship of God as patron and Jesus as client. There also exists a patron-broker client relationship, in which Jesus is the broker/mediator and Acts, also Gentiles. Whereas Mark and Matthew primarily depict Jesus as client, Acts, starting with Jesus’ heavenly enthronement as ‘Lord and Christ’, focuses and Jesus as broker.

Neyrey then studies the Pauline concept of God in Romans, 1 Corinthians and Galatians. He argues that Paul uses the pattern of Graeco-Roman philosophy to talk about God (epistemology, physics, nature). As in the Gospels and Acts, also for Paul God is primarily known in relationship as people’s patron and benefactor. In the last two chapters, Neyrey focuses on Jesus’ identification with God in John’s Gospel and Hebrews respectively Neyrey argues that in both writings Jesus enjoys God’s two basic powers, creative and eschatological power, which elevates him to a divine figure. Moreover, in both writings Jesus is called ‘God’ because he fulfils the category of a genuine deity by his full eternity—in John’s Gospel through Jesus ‘I AM’ sayings and in Hebrews through the typology of Melchizedek.

Reading the book, I felt that, at times, the patron-broker-client model needed to be stretched to accommodate the complex nexus of relationships, to the point that the model became so overloaded that it was in danger of breaking down. For example, in Acts Jesus’ enthronement as Lord and Christ and Jesus as the dispenser of the divine Spirit actually causes Jesus to became God’s co-patron rather than his broker and the Spirit and the disciples become the new brokers in search of clients. This becomes even more evident in John’s Gospel. Besides the straightforward relationships of God-patron/Jesus-client, and God-patron/Jesus-broker/disciples-client, there are also other relationships operating: Jesus, being (equal to) God, virtually functions as God’s co-patron (‘the Father and Son are one’); the Spirit-Paraclete will replace Jesus as broker; and even the disciples will function as broker since they are sent into the world as Jesus was sent, to search for clients. Would this perhaps be the reason that Neyrey does not apply the patron-broker-client model to John’s Gospel? Hence, the set of relationships seems broader and more complicated than Neyrey has portrayed. Perhaps a comparison of the patron-client model with that of the suzerain-vassal in the OT and Ancient Near East would also have been helpful. Nevertheless, Neyrey has successfully presented a new way to understand the God talk of the NT.

In conclusion, this book is very readable and illustrates the value of using the social sciences to understand the Bible. This book offers a fresh treatment of NT theology and is highly recommended to those who would like to understand better the concept of God in the NT.