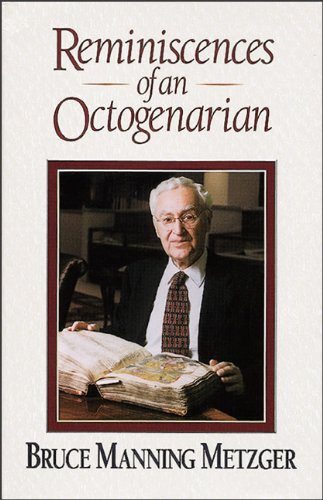 Reminiscences of an Octogenarian

Reminiscences of an Octogenarian is the autobiography of one of the best known NT scholars in the contemporary English-speaking world. It is an attractively written account by a learned, orthodox and gracious man who has been a lifelong academic, teaching for nearly all his working life at Princeton Theological Seminary, but at the same time moving widely throughout the academic world. The information his book contains, even from his earliest years, is remarkable for its precision.

Besides being a teacher, Metzger is also a writer, and his books feature prominently in his narrative. As an able linguist, he has concentrated particularly on the textual criticism of the NT, and this is the theme of his book, The Text of the New Testament: its Transmission, Corruption and Restoration (1964), and indirectly also of his book, The Early Versions of the New Testament: their Origin, Transmission and Limitations(1977). For the latter volume he had the help of other experts, and it is a unique repository of information about the ancient translations. He has put textual criticism into practice in the International Greek New Testament Project, a large co-operative enterprise with much work still before it (see ch. 5), and in the joint-preparation of the United Bible Societies’ Greek New Testament (see ch. 6). In both of these tasks he has played a leading role. The UBS Greek New Testament has gone through several editions and is widely used by students and translators, but lately it has come under much criticism from J.K. Elliott and others for its strange method of assessing variant readings.

An important work in rather a different field is his book The Canon of the New Testament: its Origin, Development and Significance (1987). This appeared at much the same time as F.F. Bruce’s book The Canon of Scripture (1988), that is also mainly devoted to the NT. It is interesting to have two independent accounts of the NT canon which both, in the light of modern knowledge, endorse the broad conservative conclusions reached by Westcott and Zahn 100 years ago.

In addition, Metzger has played a prominent part in Bible translation, as a leading member of the companies that produced the RSV and the NRSV. The RSV differs from other modern English translations in that it is the most literal, the most traditional (being a revision of an older translation, with a long pedigree), and the most widely accepted (being approved by Roman Catholics and Orthodox as well as Protestants). The NRSV differs from the RSV chiefly in being an ‘inclusive language’ translation. Although Metzger tells us that a copy was presented to the Pope, he does not mention the report that the Pope has since prohibited its use by Roman Catholics, as not being a faithful translation. The many footnotes to the NRSV give some indication (but not a complete picture) of the degree to which the acceptance of a taboo unknown to antiquity has caused the translators to depart from the original text.

Metzger mentions many other of his publications, and no disparagement of these is intended by not discussing them here, where the reviewer has simply concentrated on what are probably the most important. Among the more serious chapters of his autobiography Metzger includes some that are rather more light-hearted. In chapter 12, ‘Vexations of an Author’, other authors will sympathise with his lamentations of the long delays, sometimes inflicted on authors by editors, and with his complaint that ‘especially vexatious is the creation of a typographical error by the press after the author has approved the correct final page proof’. In chapter 11, ‘Literary Forgeries’, readers should not overlook his discussion of Morton Smith’s alleged fragment of Clement of Alexandria, containing quotations from a supposed Secret Gospel of Mark. Though Metzger speaks with caution, he is clearly among those scholars who are inclined to view the whole document as a forgery by its editor.