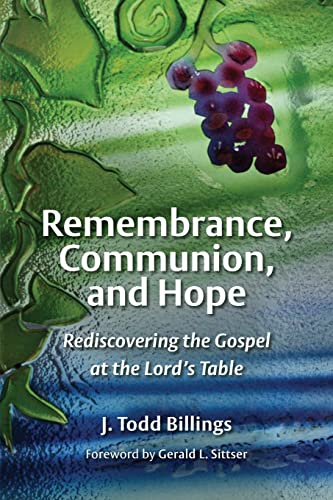 Remembrance, Communion, and Hope: Rediscovering the Gospel at the Lord’s Table

J. Todd Billings believes that churches today need to move “congregations from a static, nominal encounter with the gospel into a deeper, transformative embrace of the gospel of Jesus Christ” (p. 107). For Billings, there is no easy solution to this dilemma, primarily because the gospel begins and ends with God and God’s action in Christ. Therefore, instead of turning to human-centered options, Billings offers his readers an enticing God-centered wager: “that a renewed theology and practice of the Lord’s Supper can be an instrument for congregations to develop a deeper, more multifaceted sense of the gospel itself” (p. 1).

In this readable book, Billings offers anyone willing to take his wager a fresh and dynamic depiction of the fullness of God’s gift of the Lord’s Supper. A world-renowned Calvin scholar and the Gordon H. Girod Research Professor of Reformed Theology at Western Theological Seminary, Billings draws upon the riches of the Reformed tradition (especially Calvin) throughout, generally with an ecumenical tone. The volume is also interdisciplinary, weaving together insights from biblical exegesis, systematic theology, history, and congregational ministry.

In chapter 1, Billings exposes a few ways that the church’s functional theologies of the Lord’s Supper truncate the gospel. God’s gift of remediation is the icon of the Lord’s Supper that provides an embodied sign-action of the gospel. Moving to chapter 2, Billings builds upon James K. A. Smith’s Augustinian insights on humans as affective creatures made to love. In their embodiment, people are created to delight in God and his Word by means of spiritual practices that overflow “in concrete acts of embodied love” (p. 56).

In chapter 3, Billings provides a confessional overview of the Reformed teaching on the Lord’s Supper in eight doctrinal theses drawn from a variety of Reformed confessions. The multifaceted sketch situates the Supper within the Triune drama of salvation and the Spirit-enabled affective human desire for, reception of, and faithful response to the multifaceted good news of union with Christ by the Spirit. Taking a minor diversion in chapter 4, Billings make the case that a healthy theology of union with Christ demands a Trinitarian and covenantal ontology. Responding to Radical Orthodox authors and Hans Boersma, Billings contends that Calvin and the Reformers did not hold a dualistic understanding of God and creation that puts nature and grace at odds. Instead, seeking to be faithful interpreters of the whole of Scripture, they asserted that God’s gracious work in Christ restores and fulfills God’s original purposes for humanity to participate in God by the Spirit. This Trinitarian and covenantal approach enables a view of the sacraments in which the sign is not empty in holding forth God’s grace, nor is the sign to be so identified with the signified that people trust in the sign instead of in Christ.

In chapters 5, 6, and 7, Billings unpacks the importance and meaning of “remembrance, communion, and hope” at the Supper. He first explains that remembrance transcends mental recollection of the cross, instead serving as an invitation to the people of God to partake in the sign-act of God’s deliverance, even as they cry out in painful groaning for new creation and justice. Billings then describes the communion of the people of God at the Lord’s Supper, engaging primarily with 1 Corinthians 5–11. In their participation in this sign-act, the people of God experience the now and the not yet of both union with Christ and union with the body of Christ. Finally, Billings describes the hope signified, experienced, and enacted in the Lord’s Supper. Instead of witnessing to a human-driven social revolution or a spiritual escapism for the soul, the material Supper correctly orients Christian hope toward union with the risen and ascended Jesus Christ. The Lord’s Supper provides an embodied foretaste of the glorious future feast with Christ and his multicultural people.

Of particular note in Billings’s insightful book is the way that he illuminates the shift in American evangelicalism away from sacraments as instruments of divine grace to invitations for personal remembrance and reflection. He highlights this in two historical expositions from the 18th and 19th centuries—one on the holy fairs of Scotland (ch. 2) and another regarding the debate on the meaning of the Lord’s Supper between American Reformed theologians Charles Hodge and John Williamson Nevin (ch. 5). In the first case, Billings shows that the shift to more personal faith expressions did not arise from Reformed theology proper but emerged from the revivalist movement’s emphasis on individual choice. In the latter case, Billings demonstrates how the Reformed churches, in conformity with Enlightenment and rationalist tendencies of the day, embraced Hodge’s emphasis on Zwinglian sacramental teaching. This opened the door to a spiritualized and rationalized approach to the Supper that focused on personal faith and mental recollection.

Another strength of the volume is Billings’s application of Calvin’s doctrine of the “double grace” of Christ that includes both justification and sanctification inseparably in the atoning work of Jesus. In regard to the Lord’s Supper, this emphasis provides an appropriate corrective both to churches that focus narrowly on the forgiveness received at the Table and to churches that focus on the personal or social transformation that occurs through the Table. Instead, the Supper is both forensic and transformational, providing reconciliation with God and the sanctification of the Spirit that overflows in acts of love and justice in the world.

Also helpful are the ways that Billings addresses several practical questions regarding the Table and its administration. Congregational snapshots help the reader envision these beliefs in practice.

One minor weakness of the volume is its ambiguity regarding its preference for the Reformed tradition. Although Billings acknowledges that he is approaching this topic from a Reformed perspective, he also claims that readers from other traditions will be able to find common ground with the intentionally broad and equivocal Reformed confessional approach. However, parts of the book feel like an overt apology for Reformed doctrine. For example, Billings repeatedly and directly criticizes the symbolic-remembrance approach to the Lord’s Supper as human-centered and rationalistic. Readers holding non-Reformed perspectives on the Supper should be ready to encounter direct critique.

According to Billings, to bring the revival and reinvigoration that many churches long for, they should not look for “quick fixes” but instead look to God and to the “Spirit’s own divinely given instrument: the Lord’s Supper as a sign-act of the gospel itself—remembering, communing, and hoping with Jesus Christ, our only hope in life and death” (p. 112). This book will help readers embrace the “three-dimensional icon” of the Lord’s Supper and thus know, receive, and live into the Triune God’s drama of redemption in an embodied manner today.