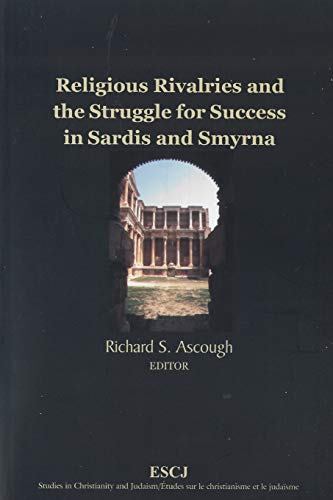 RELIGIOUS RIVALRIES AND THE STRUGGLE FOR SUCCESS IN SARDIS AND SMYRNA

This volume, by the Canadian Society of Biblical Studies, is part of a series started by the seminar entitled ‘Religious Rivalries and the Struggle for Success: Jews, Christians, and Other Religious Groups in Local Settings in the First Two Centuries CE’. The group of twelve scholars, from ten Canadian Universities and one Norwegian University, have compiled an important body of work on the complex relationship of Jews, Christians and various Greco-Roman polytheistic groups from the second century BC to the fourth century AD. Sardis and Smyrna, two close centres of importance in Asia Minor are the focus of their research which drew from a broad range of epigraphic, archaeological, numismatic and literary material to explore the complexities of the early religious elements within these two cities. The primary focus was to explore the extent to which rivalries or co-operation existed between the groups.

The volume is broken down into four sections. Each chapter is tied together with cross-references which makes for a more coherent work than usual for a project with thirteen different authors.

The chapters of the first section survey the activities of the religious groups: Jewish (ch. 2), Christian (ch. 3) and Greco-Roman (ch. 4). Chapter 5 by Philip Harland, who is no stranger to this research (see Associations, Synagogues and Congregations, 2003), examines, what he calls the ‘rhetoric of rivalry’ (55) against the backdrop of the realia. The implications of this thesis for the various religious texts are developed by the remaining authors.

The second section focuses on the ‘Indirect Contact among Jews and Christians in Sardis and Smyrna’. The bulk of this material discusses material from Revelation. Tim Hegedus (ch. 6), and John Marshall (ch. 7) identify an astrological motif (zodiac) within the Jewish community as reflected in the text of Revelation 4–7 and 12. James Knight (ch. 7) completes this section with an examination of the role of the imperial cult (Roma) identified as the prostitute in Revelation 17. He challenges the common notion that the cult of Roma was simply political and argues for a religious and political rhetoric.

The third section comprises four essays (ch. 9–12) focusing on the interaction between the religious groups. Such topics as charity following natural disasters, the rhetoric of the Martyrdom of Polycarp, Bishop of Smyrna and Milito of Sardis, and the archaeological structure of the synagogue and shops in Sardis are examined for the opportunities for co-operation and rivalry of the religious groups within the two cities.

The two chapters in the fourth section go outside the cities to look to comparison with Priene (ch. 13) and eastern Roman urbanization (ch. 14). Perhaps the use of one of the other seven cities from Revelation would have been more appropriate.

Ascough’s conclusion synthesises the lessons learned which were similar to those learned at Caesarea Maritima. He concludes:

One area of minor criticism is the placement of footnotes at the back of the work. As a technical book, generally read by scholars, the need for the close proximity of footnotes to the text is a necessity, not an option.

This is a work of contrasts between two cities and various fields of study. It will appeal not only to biblical scholars but classicists and archaeologists alike. One may not agree with all of the provocative conclusions but not since Colin Hemer’s book, The letters to the Seven Churches, (1989) has there been such a concentrated and valuable work on two of the seven churches particularly in the area of sociological history and local reference. The one possible exception being Roland H. Worth, Jr’s two volumes The Seven Cities of Apocalypse and Greco-Asian Culture and Roman Culture (2002), although surprisingly these are not listed in the bibliography or referred to. Still, overall this work speaks well for biblical scholarship in Canada.