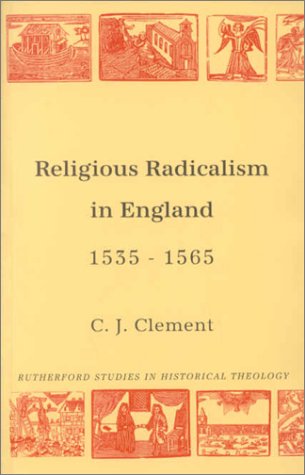 Serious students of Church history have long been aware that the popular picture of the English Reformation as a two way fight between Protestants on the one side and the upholders of medieval Catholicism on the other is a misleading simplification of a more complex reality. An examination of the Thirty Nine Articles, for instance, shows that as well as articles such as XXII and XXXI which are clearly directed against Catholic errors on topics such as purgatory and the sacrifice of the Mass, there are also articles such as article XVI on the subject of sin after baptism and XXIII on the subject of ministering in the congregation which are directed against errors to which Rome never subscribed. Clearly the mainstream Anglican Reformers were fighting on two fronts, against both Rome and against a radical form of theology coming from an entirely different direction.

Until recently not much was known about the people who were the source of this second type of theology. They have traditionally been lumped together under the generic title of ‘Anabaptists’ and have been seen as simply the English extension of that radical wing of the continental Reformation against which Luther, Zwingli and Calvin laboured so hard.

Dr Clement’s book, which had its origin as a Cambridge PhD thesis, sheds much light in this hitherto murky area, and establishes that the kind of generalised picture of the radical wing of the English Reformation which I have just described simply will not do. Drawing on documents and letters written by the radicals themselves as well as accounts of them by their opponents, Dr Clement argues that, although they were influenced by the Continental Anabaptist tradition, the English Protestant radicals were not generally Anabaptists themselves in that they did not normally practise adult baptism, and that they were in fact the heirs to the native English Lollard tradition.

Overall he presents a picture of a number of small and diverse groups of people who had an uneasy relationship with the Protestant mainstream. Sometimes they made common cause with the mainstream by, for example, joining the illegal congregations that stayed faithful to the Edwardine Reformation during the persecution under Queen Mary, and even in some cases being ordained into the ministry of the established Church. Sometimes they stood aloof from the mainstream in separatist congregations of their own, and sometimes they adopted the ‘Nicodemite’ option of outward conformity combined with a hidden spiritual life in underground conventicles.

These groups tended to be suspicious of the leadership of the mainstream English Reformation, and rejected large parts of its theology. In particular they emphasised human free-will over against the doctrine of predestination, and taught the possibility of freedom from sin in this life. Many members of these groups also played down the importance of the sacraments and rejected traditional beliefs about the Trinity and the person of Christ.

Dr Clement’s book is not an easy read because the sheer amount of detailed information provided sometimes makes it hard to follow his overall argument. It is not a book which I would recommend to students just starting their studies of the English Reformation. However, for the more advanced student who wants a fuller and more accurate picture of the religious life of 16th century England than a concentration on the Protestant mainstream can provide, this is a ‘must buy’.