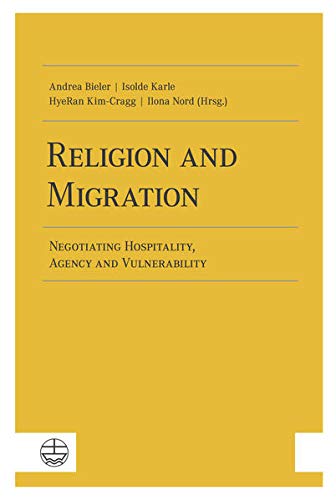 How does religion relate to migration? Answering this question from a Christian perspective is both sobering and heartening. Christians are haunted by a past that was all too mixed-up with colonialism. At the same time, they are called to an ancient path of hospitality even while living as pilgrims in the world. In today’s climate rife with polarized debate, Christians often struggle to know how to engage important issues. Consequently, this leads to disengagement. Religion and Migration seeks to break from the dichotomistic nature of many discussions of global migration and the flat characterization of migrants either as “passive and powerless victims” or “dangerous villains” (p. 11). The book purposes to thoughtfully engage a variety of perspectives that shed light on complex realities in order to clarify Christian thinking and show a way forward for constructive engagement.

Part one explores the power of migrants to effect change on religious thought and practice. Chapter 1 examines the effects of the reality that “religion and beliefs always travel with migrants” (p. 22). It uses the example of migration between Mexico and the USA to demonstrate how the religious landscape of both countries has changed due to the movement of people between them. Chapter 2 considers “postcolonial perspectives on migration,” which expose the need for a robust “postcolonial theology of migration” (p. 43). Chapter 3 begins with this pithy yet profound assertion: “Migrants are agents of social and religious innovation.” The chapter proceeds to unpack this idea, demonstrating the potentially positive effects of “living with and learning from refugees” (p. 72). Chapter 4 examines the “transnational (religious) identities” of migrants in Southern Africa and suggests “a minority discourse” as opposed to “an ethnic discourse” (p. 80) as a helpful paradigm for their theological reflection.

Part 2 questions the usage of the “highly ambiguous” terms “hospitality” and “home” (p. 14). Chapter 5 promotes a “post-migrant understanding” (p. 95) of migrant churches in Switzerland, giving them due consideration as a permanent and growing fixture in Switzerland’s religious narrative rather than a transient one. This chapter calls Canadian Christians to reconsider their self-identification as “a host nation to immigrant guests” in favor of pursuing a paradigm of “mutual hospitality” (p. 110) in order to resist neo-colonialist pitfalls. Chapter 6 holds out the Indigenous Church as a potential leader in moving towards a deepened understanding of true hospitality based upon Indigenous peoples’ biblically congruent ideals regarding treaty, collaboration, and reconciliation. Chapter 7 explores the loss of a sense of place and the realities of living in limbo experienced by asylum seekers participating in relationship-oriented church program in Basel, Switzerland. Chapter 8 describes the results and implications of research conducted by university students among young refugees in southern Germany concerning the creation of art that communicated “feeling at home” (p. 147).

Part 3 considers the current global religious and political milieu and how various practices and issues interact with the realities of migration. Chapter 9 affirms the Bible as “migration literature” (p. 164). It discusses problems facing the Protestant Church in Germany as they seek to help migrant communities. Chapter 10 examines the effects of the “religious mobility” of Cameroonian migrants in various Pentecostal churches in South Africa. It explains why Pentecostal charismatic Christianity has been “rendered meaningful and relevant” in a globalized world. Chapter 11 proposes migration as a relevant hermeneutical-theological paradigm informed by the pathos and diaspora “hybridity” (p. 206) of immigrant identities. Chapter 12 ponders the reasons for “remigration” in the Hebrew Bible and in the experiences of Pasifika migrants. Chapter 13 contributes ideas for “homiletical engagement of migration” (p. 233) using an inductive approach with an emphasis on “acknowledging vulnerability” in the practice of hospitality (p. 242). Chapter 14 suggests that the church “take seriously the alleged fears of the people” who oppose increased migration rather than “simply tabooing them with an attitude of moral superiority” (p. 255).

Religion and migration are intricately connected and influence one another. But this relationship is complicated and not often discussed in a nuanced way. This book is a refreshing, thought-provoking exception. It is an invitation to delve into the complexities of migration issues with an eye towards constructive dialogue and respect for the agency of all people, while reflecting a grassroots connection to the struggles and insights related to the experience of migration. The contributors hail from a broad range of countries and cultures. This diversity creates a truly multifaceted exploration of the relationship between religion and migration. Each chapter explores hospitality, agency, and vulnerability in a way that moves beyond dichotomized party-line polarization. Instead, we get a thoughtful and wise conversation with experts in the field and, perhaps even more importantly, with migrants themselves. Religion and Migration is well-worth reading for anyone seeking to understand the immigrant experience and to engage in migration issues in a nuanced way that is informed by biblical principles.