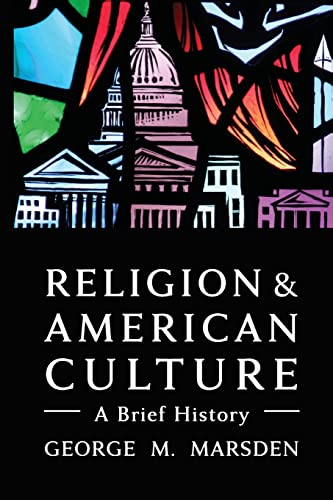 Reading George M. Marsden is therapeutic for any serious historian, and this particular work is no exception to his usual scholarship. Religion and American Culture sets out to tells the story of all Americans because all Americans have been impacted by religion’s influence on culture. Despite his rigorous academic approach, the book remains highly accessible as well. While writing from a Christian worldview, Marsden does not exclude any potential audience.

Marsden earned a PhD in American History from Yale University after time spent at Haverford College and Westminster Theological Seminary. His teaching credentials include Calvin College, Duke Divinity School, and as a professor of history at the University of Notre Dame, where he maintains the title of emeritus professor. In this particular book, Marsden leverages his historical credentials and experience to tackle long-debated questions about the identity of America herself.

Is the United States a bastion of Christian heritage or the top cultural exporter of consumerism and secularism? Both are true according to Marsden. America’s relationship with religion is a paradox. He begins his introduction by stating, “The United States is both remarkably religious and remarkably profane” (p. 1). He clarifies his own literary intentions by stating, “The central purpose of this book is to explore the interactions of religious faiths with other dimensions of American culture that have led to such striking paradoxes” (p. 1). The book then commences to expose the chameleon of a historical America that can be all things to all people—deeply religious at times while simultaneously the beacon of secular humanism. Marsden helps distill elements of truth from these two views of American culture.

According to Marsden, America would not exist without religion. Yet, he does not mean this in the typical sense of some political writers and cultural advocates. In Marsden’s version, America is a product of all of the religious seeds sown into her past. The goal of the author is not to tell the story of Christianity in America, and this is a distinctive strength. The chapters progress chronologically but focus on major developments and changes as their pivot points throughout. Marsden does not shy away from addressing the impacts of new influences or religious groups. The presented evidence is clear: as religious life in the nation evolved, so did the culture.

For many chapters, the stories of great awakenings and ethnic migrations are somewhat familiar to students of American history. However, this time, the reader engages the same incidents from a different perspective. Events are illuminated from diverse angles as laws, lifestyles, and political movements are shown to be products of the culture rather than culture creators in and of themselves.

In the final chapters, the book addresses the massive shift and fragmentation in American cultural homogeny after the 1960s. In Marsden’s paternity test, the pluralistic society we live in today is a child of these decades of cultural self-searching—even if this child is barely recognizable to modern religious purists who see nothing but confusing changes. Evidence of this diversity is evidenced to change traditional dualistic viewpoints as well. Marsden notes, “One general factor leading way from any simple polarization of the culture wars variety was the sheer religious diversity of America. No one group … could pretend to speak for even one side of an issue” (p. 250). America was born with a wide variety of religious opinions and continues in this tradition today. Therefore, understanding our America is far bigger than understanding a single religious viewpoint.

Marsden’s survey of American religious culture is not just the story of big historical events either. The book also delves into specific moments of history. Instead of simply telling the reader when and where a movement began, the author presents the beliefs and scriptures that instigated the events. From the inner workings of Pentecostalism to the rise of Premillennialism and more, the book seeks to build true understanding of how each idea contributed to their own time and to our time.

This latest edition maintains much of the same scope and content as prior editions, yet Marsden has broadened both his interpretive analysis and his audience. Originally intended as a textbook based on his own years of collegiate teaching on the topic, the third edition has been reimagined to also welcome non-academic readers. Chapters that had been briefly focused on historical narrative now include more interpretive content. The advancing pluralism and religious angst in today’s America is mined for new perspectives on earlier time periods in American religious history. The final pages in the second edition (2001) contained only a brief mention of expectations for the 21st century. This section has now been expanded to an entire chapter of information and analysis.

This brief volume is profoundly helpful in building an accurate understanding of our modern world—all of which has been impacted by American culture. It has value for use in the academic settings of both secular and religious institutions of higher education as the scholarship is robust and the presentation of all views is charitable. Marsden helps all readers understand “why” events happened.

Additionally, Marsden is exceptional in his ability to parse the difficult-to-bisect topic of God and country. His assumption that America was founded and defined by religion comes from a far different place than comparable authors. Instead of using the argument of the past to call people to relive a particular time of historical greatness, Marsden delivers the facts. The reality is that everyone in America today is currently being impacted by religion and its culture shaping abilities.

If any weakness can be identified it is that this is only the story of the America’s journey of faith after the arrival of outside colonists and immigrants. From various strains of Christianity to our modern, pluralistic society, the story is immense. Yet, the author found only a few small moments to interact with the indigenous religions that were largely displaced. A less informed reader could come away with the false, and frighteningly common, assumption that colonists “brought religion” to the Western Hemisphere.

The strength of the book lies in its scholarship and its chronological structure. Marsden avoids one-sided bias even while writing from a Christian perspective. Religion and American Culture says: you don’t have to take Marsden’s word for it. His only predetermined effort is to tell the story of the impact of religion on America, for America, and by America. America would be a better place if everyone got their information from George Marsden. Religion and American Culture is a must read.