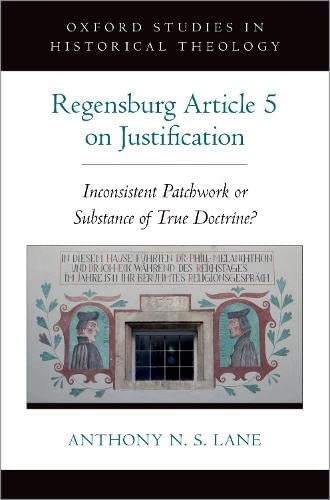 The last seventy years have seen a profusion of dialogue between Protestants and Roman Catholics on the doctrine of justification. Behind each of these discussions has stood the Regensburg Colloquy, where in 1541, a panel of Protestant and Catholic theologians gathered to discuss their doctrinal differences. To the surprise of many, they managed to find agreement in the famed Article 5. In this volume, nearly twenty years in the making, Anthony Lane provides a thorough account of the article’s historical background, content, outcome, and significance.

For those who may be unfamiliar with Article 5, the controversy revolved around the underlying idea of double righteousness (duplex iustitia). Thus, on the vital question of whether justification involved an inherent or imputed righteousness, Article 5 asserted that it is both. In justification, the article asserted, God imparts divine righteousness by the Holy Spirit and he also forensically imputes it. For some Reformers, however—particularly for Luther—this doctrine threatened sola fide and amounted to a fatal concession to Rome. He compared the article to a new patch sewn onto an old garment (p. 36).

Regensburg Article 5 on Justification is animated by the question of the subtitle. Does Article 5 represent an inconsistent patchwork of theological concepts, or does it represent a cohesive doctrine? Some, like Luther, dismissed it as an incongruent hodgepodge, while others, such as Calvin, saw it as a legitimate expression of Christian doctrine. Eventually most interpreters came to regard Article 5 as a discordant patchwork. In this regard, Peter Matheson’s quip is often cited: “The dialogue between Protestantism and Catholicism at the Diet of Regensburg in 1541 did not fail. It never took place.” Others, such as Dermot Fenlon, have called it a “scissors and paste job.” Lane, however, begs to differ and spends 370 pages illustrating why.

Recognizing the highly polemical nature of the topic, Lane begins by placing his ecclesial cards on the table, identifying himself as an “Evangelical (of a more Reformed than Lutheran persuasion) who believes the Protestant doctrine of justification” (p. 3). In addition to illuming the details of Article 5, he seeks to clarify the doctrines of key figures such as Calvin, Contarini, Gropper, and Pole, all of whom interact with the article. Lane’s research offers insights that will enrich contemporary discussion on justification among Protestants and Roman Catholics.

In the interest of making this academic work accessible to a larger audience, Lane has translated the material into English in the body of his text, except for a few technical terms, which are defined in the “Glossary of Latin Terms” at the conclusion (p. 335). He also includes an appendix with major drafts of Article 5 from Worms, Melanchthon, Eck, Gropper, and the final version. All but the Worms draft (which is much longer) appear in two columns, with the Latin to the left and English to the right—a splendid gift to students.

The heart of Lane’s book is chapter 5, where he offers a meticulous analysis and commentary of every line of the article. Bolded names of various noteworthy sixteenth-century teachers punctuate these pages (e.g., Contarini, Eck, Tridentine Decree on Justification, Pighius, Bucer, Calvin, etc.). For example, following §3:7, Lane says, “The emphasis on the role of the Spirit in uniting us to God by faith is in line with Calvin’s approach in the first chapter of Book 3 of his Institutio, most of which is from 1559” (p. 167). Such comments reveal how important figures were processing and being influenced by Article 5. Surrounding chapters address important dimensions of the sixteenth-century justification debate: reactions to the article, developments following it (including the Council of Trent’s Decree on Justification), and a distinction between “double righteousness” (duplex iustitia) and “double justification” (duplex iustificatio). Finally, chapter 6 summarizes Lane’s argument for the theological integrity of Article 5.

What Lane convincingly argues is that, according to Article 5, justification is on the basis of imputed, not imparted, righteousness. The forensic declaration of Christ’s righteousness is the necessary ground by which God accepts sinners because inherent righteousness remains flawed and unworthy of divine favor. Precisely because of this emphasis on the ongoing need for mercy, the Protestants at Regensburg could embrace the final version of Article 5. Lane thus quotes Calvin, who wrote to Farel on May 11, 1541: “You will be astonished, I am sure, that our opponents have yielded so much.… Our friends have thus retained also the substance of the true doctrine, so that nothing can be comprehended within it which is not to be found in our writings” (p. 38).

Regensburg Article 5 on Justification is a meticulous work of scholarship. At the same time, it is a delightful read that draws us into the lives and works of the various participants. It also lays important groundwork for future scholarship on the subject, such as the impact of double righteousness upon renewal movements of the Italian Peninsula. Lane never ambles into history in search of points to score in contemporary religious debate. Rather, he plunges into the past to understand it and find resources to illumine present-day challenges and opportunities. Lane’s capacity to understand these figures in the context of their religious communities (e.g., Wittenberg, Geneva, Cologne, Rome) allows him to avoid both idealizing his subjects and cynically dismissing them. Such a perspective enables him to grasp the diplomatic turns of their arguments and decisions rooted in the demands that confronted these figures at Regensburg.

No future historian of the Reformation should have the confidence to label Article 5 an “inconsistent patchwork” without first addressing the formidable argument of this volume.