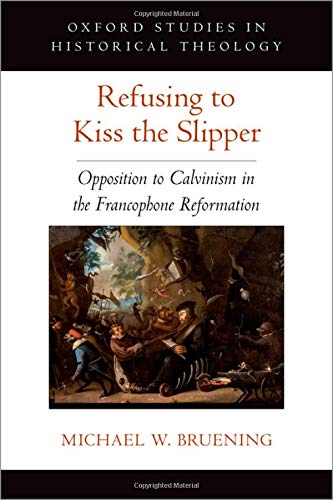 Refusing to Kiss the Slipper: Opposition to Calvinism in the Francophone Reformation

With his second historical monograph, Michael Bruening, professor of history and political science at Missouri University of Science and Technology has sought to capture a perspective on the Francophone Reformation that contrasts with recent historiography. He does so by focusing on “Calvin’s evangelical opposition together … as a network of opposition to Calvin, Beza, the Genevan Reformation, and the French Reformed churches” rather than merely as discrete, “idiosyncratic voices” (p. 4).

This monograph consists of eight chapters. The first chapter surveys leading figures of the effort at reform led by Marguerite of Navarre. In contrast to Calvin and his followers, this effort “envisioned a state-sponsored, national reform that would take place within the existing French church” (p. 9). In the second chapter, Bruening gives a detailed look at the formation of networks led by Guillaume Farel and later John Calvin. Here, he argues that because Calvin essentially severed the connection between reform and the “secular magistrate” (p. 37), he departed from both Marguerite’s efforts and Zwingli’s. Already, in the early years of the formation of Calvin’s network, we begin to see doctrinal stances on “excommunication, the Eucharist, and predestination” (p. 64) that would both strengthen the bounds of the network and eventually force out those who did not adhere to the same positions.

In the third chapter, Bruening describes opposition to the Calvinist network in Francophone Switzerland. Those belonging to Calvin’s network faced numerous defeats as the more Zwinglian approach to reform, which favored a closer tie with secular authorities, had broad support in the region. Chapter 4 continues the story of opposition to Calvin’s network in Francophone Switzerland, which saw its consolidation under the leadership of Andre Zebedee and others.

The fifth chapter gives attention to Sebastian Castellio’s challenge to the Calvinistic network since he advocated a theology that “was personal, spiritual, and moral” and thus a threat because followers of Castellio “could be Calvinists institutionally but Castellionists inwardly” (p. 156). The sixth chapter discusses a network of people throughout “Basel in the Suisse Romande and in Montbeliard” (p. 180), specifically who stood behind the emphases of Castellio, forming into another network in opposition to Calvin’s network. The seventh chapter explores what Bruening designates “Gallican evangelicals” (p. 211), i.e., those who saw Calvin’s reforming efforts as an obstacle to true reform and advocated for the continuance of the episcopal system of church government. In the final chapter, the author describes the assault of “a minor French nobleman” (p. 256), Jean Morely, on Calvinist ecclesiology. The main reason for Morely’s opposition, according to Bruening, is his opposition to the foreign Genevan influence on the French church. The conclusion of the book makes further observations and summarizes the various connections of individuals aligned with different networks of opposition to Calvin.

This monograph is a work of serious historical scholarship. Bruening is deeply conversant with primary sources while engaging with secondary literature. He demonstrates, by looking at movements and particular figures, that endorsement of Calvin and his reforming efforts was not accepted across the board. In fact, there are several occasions when it was unclear if the Calvinist network would survive the opposition it faced—a point Bruening makes throughout.

Beyond painting a clear picture of the opposition to Calvin in the Francophone Reformation, several other strengths stand out in this book. First, his discussion of Andre Zebedee advances scholarship on this neglected figure. Second, he persuasively argues against the defense that Calvin’s role in Servetus’s execution was because he was only a man of his time by building the case that many people contemporaneous to the event were opposed to the execution of Servetus as well as Calvin’s role in it. Third, Bruening makes the intriguing suggestion that Sebastian Castellio was a forerunner to “the liberal Protestant tradition” (p. 179), which warrants further attention. Fourth, he compellingly argues that one of the main reasons for the success of Calvin and his network is that people craved a decisive leader, and Calvin fit the bill.

In summary, this is a welcome and necessary addition to French Reformation and Calvin studies. By looking at Calvin and his followers through the lens of those who opposed his reforming efforts, one gains a fuller understanding of the man and the Reformation he led. We are in Bruening’s debt for producing an offering that gives long-overdue attention to the broad opposition to Calvinist reform in the Francophone and corrects earlier historical works that present an oversimplified picture—highly recommended.