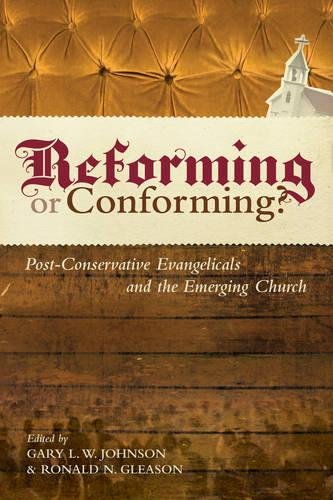 Reforming or Conforming? Post-Conservative Evangelicals and the Emerging Church

The twelve essays cover a wide array of topics related to the theme: the problem of the humanity of Scripture (Paul Wells); the need for a metaphysic in an evangelical theological method (John Bolt); the foundationalist presuppositions in the nonfoundationalist theology of John Franke (Paul Helm); the necessity of creedal boundaries for the catholic Christianity of Brian McLaren (R. Scott Clark); the Princetonian understanding of right reason and Augustinian voluntarism as the proper framework from which to interpret their dogmatism (Paul Kjoss Helseth); the Van Tillian notion of certainty rooted in the Reformed theological principia (Jeffrey C. Waddington); the shift from soteriology to ecclesiology in the theology of the ECM with a proposed Bavinckian solution (Ronald Gleason); the influence of N. T. Wright in McLaren’s soteriology in The Secret Message of Jesus (Guy Prentiss Waters); the inherent dangers in the value and priority of diversity in the ECM (Phil Johnson); the “cultural entrapment” of the ECM at the expense of biblical truth and biblical doctrines important to the Christian faith (Martin Downes); McLaren’s ambiguous doctrine of hell (Greg D. Gilbert); and an overview of postmodernism and the emergent church (Gary Gilley).

Space does not allow discussion of every chapter, but a few notable essays should be pointed out. First mention should no doubt be given to the essay by Paul Wells on Scripture. Wells notes that much discussion of Scripture in the past thirty years or so has been a reaction and defense to strikes by modernism and skepticism. He insightfully asks and concludes, “And where does the real problem lie, in so far as the doctrine of Scripture is concerned for evangelicals? Not primarily in its authority and inspiration, nor in its divine nature as Word of God, nor even in its inerrancy … but in its humanity” (p. 28).

After surveying four models typically used to explain the divine-human relationship found in the Scriptures (witness, accommodation, the analogy between Christ and the Bible, and the servant-form of Scripture), he concludes that these have shown themselves to have serious shortcomings. He then engages with Bloesch, Pinnock, and Enns whom he considers to have “in common a desire to take ‘two-factor’ theology seriously” (p. 42). Although he appreciates various aspects of their formulations, he finds Bloesch “theoretically inconsistent and self-contradictory,” Pinnock´s formulation as imposing limitations upon the work of God, and Enns’s “provisional” confession of the Bible as the Word of God as “flawed and unacceptable” (p. 155).

Wells therefore proposes a way forward in which the humanity of the Scriptures is both taken seriously and used positively to further the discussion of the divine-human relationship in the Scriptures. He makes four suggestions regarding the humanity of Scripture: (1) it should be viewed within the “fundamental matrix … of a new humanity in the old” (p. 57); (2) it “has a particular political function, a function as broad as the creation, linked to the fashioning of the new humanity of the kingdom” (p. 58); (3) it is “Christ-centered … because Christ is the conclusion of the whole historical process” (p. 59); and asserts (4) “there is no doubt a link that can be made between the humanity of Scripture and humanity in regeneration” (p. 60).

Despite the fact that this proposal makes no mention about how to deal with the problems posed by historical and textual criticism, it seems that this integrative and positive approach to the humanity of Scripture has much to offer. No doubt many will hope to see more from Wells on this.

The essays by Waters (“It’s ‘Wright,’ but Is It Right? An Assessment and Engagement of an ‘Emerging’ Rereading of the Ministry of Jesus”) and Gilbert (“Saved from the Wrath of God: An Examination of Brian McLaren’s Approach to the Doctrine of Hell”) are to be commended for their thoughtful and thorough engagement with McLaren’s writing and theology. The reader leaves these essays with concrete examples of what emergent theology can look like rather than the empty rhetoric that can often overtake these discussions.

Finally, while Phil Johnson’s essay (“Joyriding on the Downgrade at Breakneck Sped: The Dark Side of Diversity”) suffers from slippery-slope argumentation, he does a great job in setting the discussion, giving background regarding the difficulty of defining the ECM, and acknowledging its contributions while still critiquing its shortcomings. As an aside, readers unfamiliar with the ECM would have greatly benefited by an earlier sequencing of this chapter.

Readers of this volume will be pleased to find intelligent, well-researched essays full of footnotes containing helpful bibliography. After reading the somewhat off-putting and polemical introduction, this reader was relieved to find that the rest of the volume displayed balance and objective tenor, adding to its credibility as a useful resource. Moreover, many will be delighted to see the appropriation of Bavinck’s thought in the authors’ contributions. Weaknesses of the volume include the inconsistent caliber of the chapters, as well as the unwarranted blurring of post-conservative and emerging thought throughout the book. Moreover, rather than just pointing out flaws, some of the essayists could have interacted more seriously with the emerging positions. Despite its few shortcomings, this volume is a great resource and should prove beneficial to the seminary student or pastor who wishes to engage in these contemporary issues.