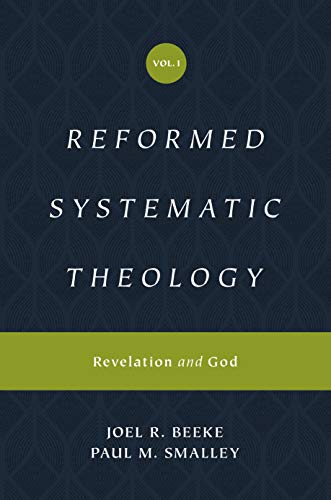 Theologian Joel Beeke recently published the first volume of his magnum opus, Reformed Systematic Theology. The first of four anticipated works, this volume presents the culmination of Beeke’s theological labors at Puritan Reformed Theological Seminary. Beeke with his teaching assistant, Paul Smalley, invites readers into his seminary classroom, where he expounds the rich heritage of reformed, experiential systematics. This volume includes a presentation of Beeke’s theological method and two loci of theology, the doctrine of revelation and the doctrine of God. His approach demonstrates a theological sensitivity to other disciplines—such as biblical, philosophical and historical theology—with an aim toward pastoral application.

Joel Beeke carries on the tradition of the great Reformed systematicians. These theologians labored to present comprehensive visions for the Christian faith—such as Wilhelmus à Brakel’s A Christian’s Reasonable Service and Herman Bavinck’s Reformed Dogmatics—for the purpose of living unto God. Their works examined the foundational principles for knowing God and illustrated doctrinal implications for polemics and pastoral application. Like these previous theologians, Beeke presents a comprehensive system applicable to contemporary doctrinal and experiential challenges.

Beeke echoes a concern of post-enlightenment theologians: theologians must ground Christian truth in God’s revelation against the polemics of modernism and post-modernism. He follows other reformed theologians such as Herman Bavinck, who studied the leading philosophers of his time in order to critique contemporary philosophies and ideas. To illustrate, Beeke engages with newer forms of panentheism in process theology (pp. 596–98). This theological concern informs his discussions on the doctrine of inerrancy (chs. 20–21). Also, readers will want to read Beeke’s arguments against the continuation of special revelation in the form of prophecy (ch. 24). In chs. 26–47, Beeke unfolds “the Doctrine of God’s Triune Glory,” giving significant attention to God’s nature and attributes and to the true knowledge of God that “transforms a person” (p. 502). Beeke defends the unpopular doctrines of election and reprobation. He concludes this volume by reflecting upon angels and demons, providing insight to the nature of spiritual warfare and the activities of demons.

This work assumes its reader will have previous knowledge of Scripture, historical theology, and the history of philosophy. Those familiar with the reformed tradition may find the content repetitious when compared with other works. Readers will hear distant echoes of their favorite theologians or see them repeatedly quoted and referenced. At times, Beeke jumps into the deep waters of various theological and philosophical debates, potentially leaving less informed readers behind. He introduces each doctrine with a review of relevant historical and philosophical discussions, figures, and definitions. I fear that many readers will lose interest in these sections, never arriving at the rich biblical reflection and application. That said, anyone who plods slowly through this volume will reap much spiritual fruit.

Beeke introduces the philosophical and theological debates surrounding these doctrines at the beginning of different sections, but he rarely returns to these different views while he builds each locus. The work would benefit from having the polemics and theological construction interwoven throughout each section. In addition, Beeke’s application seemed limited to theological debates, historical reflection, and personal piety. This volume serves as an opportunity for Beeke to speak to many important contemporary issues. One wonders how a figure such as Herman Bavinck would instruct Christians in a culture marked by the rebirth of paganism and identity politics. How would a reformed systematician speak to the controversies and various heresies that fill conservative churches and denominations? Hopefully, the future volumes will give Beeke an opportunity to fulfill the role of a public theologian.

A blending of biblical content, historical analysis, and personal application, this masterful work includes a sixty-four-page scripture index, a fact which bears witness to the deep biblical reflection driving this work. In addition, Beeke capitalizes on the decades he spent publishing historical and biographical works of the Puritans and Dutch Reformers. Writing in Puritan style, he adorns his theological conclusions with rich quotations from these historical giants. One of the trademarks of Puritan and Dutch Reformed pedagogy, numerous “uses” following exegetical and theological reflection appear in a contemporary form at the end of each section for the sake of personal application. Dry theological meanderings and high-tower polemics do not suit Beeke, as he aims for every reader to behold the glory of God and to apply truth to the heart. Readers will profit from the contemporary presentation of historic reformed theology in this volume. Joel Beeke’s exemplary model of pastoral scholarship will influence the theological writing of the next generation of systematic theologians, pastors and layman.