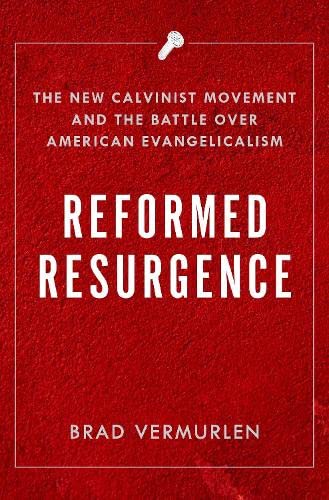 Those who, like the reviewer, hot-footed their way through Collin Hansen’s Young, Restless and Reformed: A Journalist’s Journey with the New Calvinists (Wheaton, IL: Crossway, 2006), a book based on extensive in-person interviews with major figures in the ‘new Calvinist’ movement, will find Brad Vermurlen’s Reformed Resurgence similarly hard to put down. But even for those who have never yet read Hansen’s 2006 work and yet want to better understand the new Calvinist movement, Reformed Resurgence makes for a fascinating read.

The book does make demands on the reader. It is a re-worked doctoral dissertation in the field of sociology of religion. But of its seven chapters (the first of which is introductory), the six which follow are evenly divided between narrative-explanation (chs. 2, 3 and 7) and interpretation informed by sociological insight (chs. 4, 5 and 6). One might be tempted to read the in-depth interviews and analysis about the movement (which far surpass anything I have seen elsewhere) and skip the social analysis. To do so would be a mistake. Such social analysis is perfectly appropriate since the new Calvinist movement is a social phenomenon in which group behaviour, leadership dynamics and competition with other viewpoints operate.

On Vermurlen’s analysis, the New Calvinist movement is one of four competing versions of American evangelical Protestantism, each of which has been confronted with massive cultural shifts in the areas of gender, same-sex marriage and cultural pluralism. First (and largest) is mainstream Evangelicalism, the broad trans-denominational coalition which came to the fore in the 1940s. Second, there is what has come to be known as emergent Evangelicalism, often characterised as re-fashioning the Christian message in light of post-modern concerns. Third, there is a neo-Anabaptist Evangelicalism which is most intent on applying Christian ethical principles in an increasingly secular America. The rise of New Calvinism, the fourth variety, reflects dissatisfaction with the disarray increasingly found in mainstream Evangelicalism, driven too often by pragmatism and a lack of readiness to spell out Christian teaching in an articulate way. As well, New Calvinism’s rise reflects a rejection of emergent Evangelicalism’s attempt to move beyond the sheer pragmatism of the mainstream by the embrace of the post-modern assumptions shared by so many younger Americans.

Numerically speaking, the New Calvinism (whose existence he dates from Hansen’s 2006 reporting) is the largest and most vocal of the three alternatives to the evangelical mainstream. Themelios readers know it from its websites, blogs, Twitter feeds, and the public conferences from which its most high-profile preachers and church planters hold forth. How large is it? In appendices, Vermurlen points to the approximate measurement accessible through the numbers of Twitter-feed followers gained by various public figures. Among New Calvinists, the highest rated is the hip-hop artist Lecrae (1.6m), followed by John Piper (1m). Neither of these equal the followings of mainstream evangelical figures like Rick Warren (2.2m). But there are other ways of gauging New Calvinism’s influence within the associated streams of Evangelicalism.

In what the reviewer found the most thought-provoking segment of the book (ch. 6), Vermurlen documented how New Calvinist bloggers and preachers were first to respond to a number of challenges to received evangelical doctrine and ethics early last decade, shaping the response of broader Evangelicalism to these same questions. His examples? The approximations of universalist teaching in the writings of Rob Bell (2011) and the temporary indication that World Vision was willing to deploy same-sex married couples as its agents in various regions of need (2014). Vermurlen, not inappropriately, singles out these instances as occasions in which New Calvinists have functioned as ‘gatekeepers’ of the evangelical world, taking it upon themselves to be the arbiters of permissible beliefs and practices for the larger evangelical movement. But the reviewer is not convinced that the examples themselves support the larger point for which Vermurlen contends. Does American Evangelicalism have any gatekeepers? Christianity Today magazine once functioned in this way—less so in modern times. I think that a fair response to Vermurlen’s line of argument is that adherents of Reformed theology have always punched above their weight in cooperative evangelical enterprises just because they take theology and ethics more seriously than some other expressions of Evangelicalism. So it was in these cases. But with this reservation stated, the reviewer grants that Vermurlen has correctly pinpointed a pattern of rapid and non-consultative response shown in these episodes. The reviewer agrees that such tactics do not reflect well on the movement. Earnest Evangelicalism is not confined to the New Calvinist movement, and the registering of grave concerns about threats posed to the faith needs to reflect a wider trans-confessional constituency.

I cannot praise Vermurlen’s work too highly and urge it upon the readers of this journal. We will not soon see evaluative writing about the New Calvinist movement carried out with this same blend of understanding and critical evaluation. If Reformed Resurgence has a blind spot, it may be that the commencing of this study in 2006 works to obscure the fact that an earlier generation of aggressive, innovative American Calvinists such as John MacArthur and R. C. Sproul were staking out highly similar territory in the preceding two decades. Clever use of digital media, open denunciation of suspect orthodoxy, and large-scale conferences that featured passionate proclamation are tactics already illustrated by those who came before.