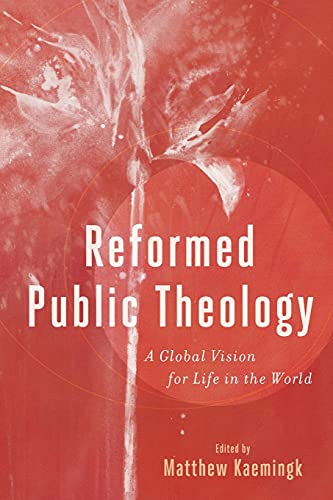 Reformed Public Theology: A Global Vision for Life in the World

In Reformed Public Theology, Matthew Kaemingk brings together global voices from the Reformed theological tradition to consider how the distinctives of the Reformed tradition impact the way Christians think, speak, and live in the public square today. The volume is dedicated to Richard Mouw whose thinking and influence is evident throughout the work. In fact, Kaemingk did his doctoral work under Mouw and he frames the entire volume within Mouw’s idea of searching for a “holy worldliness” (p. xii).

Kaemingk introduces the book by outlining the contours of public theology as a discipline. He also clarifies the common intention of the various authors: to demonstrate ways that the Reformed tradition is particularly well-suited to making a contribution to the discipline of public theology (pp. 14–18). The book is divided into six sections. It begins with several chapters addressing public culture, then focuses on economics, justice, aesthetics, and education, and terminates with considerations of public worship.

Rubén Rodríguez exemplifies the strengths of the volume by beginning the “Public Culture” section with a chapter that demonstrates the Reformed heritage to be defined by migrants in order to argue for the importance of the voices of migrant peoples today. Relatedly, this section contains James Eglinton’s discussion of lingual diversity, Nico Vorster’s juxtaposition of African decolonization writings and Reformed theology. The section also includes fascinating personal and theological reflections of a healthcare worker, Margriet van der Kooi, and a pastor, Cornelis van der Kooi, as they worked in the midst of the euthanasia openly endorsed in the Netherlands. The final essay in the section is its strongest. N. Gray Sutanto reflects on the Indonesian policy of Pancasila—a policy meant to protect religious pluralism. Drawing on Kuyper’s concept of “sphere sovereignty,” Sutanto exposes this policy’s limits and abuses, and he also addresses inappropriate Christian responses under the policy.

Katherine Alsdorf’s chapter opens the “Public Markets” section of the book by arguing argument that the gospel should have a disruptive and transformative impact on New York City’s industries. Lucas Freire follows with a Kuyperian response to Brazil’s regulation-heavy market policies. Agnes Chiu concludes the section by making the case from the Reformed tradition’s upholding of human dignity for labor unions to uphold and fight for labor rights in China.

The “Public Justice” section begins with an overview of Reformed political ideologies written by Bruce Riley Ashford and Dennis Greeson. The section then moves on to the more specific applications in Romel Begares’s treatment of nationalism and violence in the Philippines and Stephanie Summers who appeals for justice in the institutions, practices, and politics in the United States. Of note is Summers’s concept of cobelligerency. Though advocating side-by-side with LBGTQ activists might appear initially scandalous to many Christians, Summers appeals to the unifying effect of common grace, while maintain distinctive differences, to provide a powerful ground for Christians to listen and work humbly with non-Christian neighbors for the common good when their goals align.

The “Public Aesthetics” section provides insight into Reformed theology’s interaction with the arts. Makoto Fujimura’s chapter powerfully blends his personal narrative as an artist with scriptural engagement in the book of Isaiah to produce insight into the materials, influences, and styles that define his art. James K. A. Smith draws from the well of common grace, in the world and writing, to highlight the power and beauty of well-crafted words. Robert S. Covolo retrieves Calvin, Kuyper, and Dooyeweerd to think through how fashion can be a means to push against the cultural zeitgeist and market forces while working creatively in the world as God intended. Eric O. Jacobsen pulls the reader into his expertise to demonstrate how urban planning can both serve to glory in man’s idolatry or glory in God through the promotion of human flourishing by seeking the common, cultural, and civic goods.

In the section devoted to the “Public Academy,” Bethany Jenkins offers first-hand perspective on the opportunities and difficulties facing people of faith on secular college campuses. Nicholas Wolterstorff follows with a reflection on the academy itself and how the Reformed tradition’s promotion of diverse worldviews allows for better scholarship. Finally, Jeff Liou offers a street-level perspective on how Christians interact charitably in affirmation, critique, and correction on Critical Race Theory.

The volume’s final section provides the powerful conclusion towards which it has been driving: “Public Worship.” Such a conclusion reinforces the Reformed impulse that “the walls between the sanctuary and the street should be made increasingly porous” (p. 18). This section features chapters that treat the sacraments, corporate prayer, and public piety as means by which the people of God carry their public burdens into the sanctuary and lay them on the altar. It is in worship that the displaced finds a home, trauma finds divine concern, the marginalized find belonging, and reality finds clarity.

While the book exhibits significant strengths, the contributors regrettably seem to draw from a limited portion of the “treasured texts” of Reformed tradition (p. 13). Though the authors themselves represent a global diversity of voices, they almost uniformly seem to refer to the same sources found in Calvin, Kuyper, and Mouw. The limited pool of sources leads to a sense of redundancy from chapter to chapter. Admittedly, Kuyper’s concepts of sphere sovereignty and antithesis are foundational and therefore unavoidable within the Reformed engagement with the public square. Still, the reader is left to wonder how the broader Reformed tradition—especially the tradition between Calvin and Kuyper—might speak into the problems of the world today.

In the end, however, the book succeeds in what it sets out to do: Reformed Public Theology offers robust conversations at the intersection of Reformed Theology and public life (p. 2). The diverse contexts represented by the global voices and concerns of the authors call the reader to humbly sit and listen, while lifting their eyes to see all that God is doing throughout the world through his people. The Reformed tradition truly does have much to offer the Christian who seeks to faithfully and fruitfully engage within the global public square.