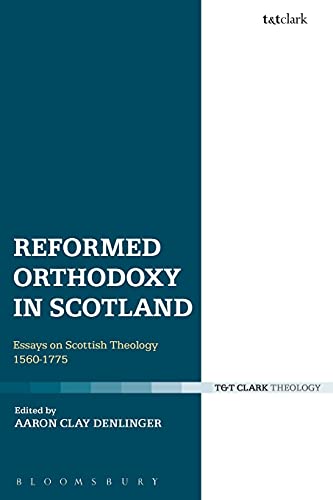 Recent scholarship has insisted that doctrinal continuity between the reformers and their heirs cannot be judged by locating a dogmatic “center” (e.g., predestination), and then documenting multiple, verbatim iterations across generations, nationalities, and institutional contexts. Scholars have instead stressed sensitivity to the unique ecclesiastical, political, and educative contexts that helped to shape the development of Protestant doctrine. These developments have also challenged the older model of reading the history of British and Irish Protestantism in relative isolation from the continent. In Reformed Orthodoxy in Scotland, editor Aaron Clay Denlinger has drawn together a formidable scholarly cast to reassess the significance of Scotland within the international landscape of early modern Reformed orthodoxy. In offering a more supple and pliable picture of Scottish Reformed orthodoxy, he has provided a valuable addition to literature on the post-Reformation period more generally.

An introductory essay by Carl Trueman suggests three gaps that the collection aims to address. First, despite acknowledgement of the international character of Reformed orthodoxy, Scottish orthodoxy has failed to attract much interest in studies of British cross-pollination with the continent. This neglect becomes particularly striking given the centrality of Scotland for the formation of Reformed political theories, which constituted a distinctively Scottish contribution to the wider European conversation; therein lies the second gap. Thirdly, the book redresses a (Barthian) historiographical bias, stemming from T. F. and J. B. Torrance, that sees post-Reformation orthodoxy as a degeneration from the purity of the theology of the reformers.

Denlinger’s volume comes in three heuristic parts. “Early Reformed Orthodoxy (c. 1560–c. 1640)” canvasses the period in which second generation reformers sought to reconstruct both church and university in the face of a resurgent Rome, in general, and of the considerable missionary and educative reforms of the Jesuits, in particular. Donald John MacLean challenges what he calls the “‘Knox versus the Knoxians’ subplot,” highlighting the international character of seventeenth century Reformed thought to account for the lack of direct appeals to Knox’s influence. Ernest R. Holloway III looks at the Andrew Melville’s responsibility for the introduction of the new learning at Scotland’s medieval universities, particularly through the elevation of biblical Hebrew. Brannon Ellis conducts a double-barrel investigation of Robert Rollock’s doctrine of election, scrutinizing federal theology’s modern critics, on the one hand, and placing Rollock’s distinctive view of the decree in relation to other Reformed thinkers, on the other. Nicholas Thompson considers the Aberdonian response to the revival of Roman Catholic interests in the first half of the seventeenth century. The editor in chapter 5 offers an intriguing reappraisal of the General Assembly’s 1640 indictment of Robert Baron’s theology. Denlinger’s industrious research into an Aberdeen manuscript base indicates the essential orthodoxy of Baron’s infralapsarian hypothetical universalism. Finally, Donald MacLeod lays out the political principles of Alexander Henderson, particularly concerning acceptable grounds of resistance to earthly rulers in matters of conscience.

The second section, “High Reformed Orthodoxy (c. 1640–c. 1690),” covers the period marked by “an increasingly fine-tool and diverse polemic” (p. 4), debates often stimulated by critical questions within the Reformed camp itself (e.g., Amyraldianism). Simon Burton delineates Samuel Rutherford’s indebtedness to the ethics of Duns Scotus and Thomas Bradwardine. Aza Goudriaan analyzes Rutherford’s views on possibility and impossibility, gauging his reliance on Bradwardine and tracing the subsequent reception of his own view. Guy Richard paints an evocative picture of the twofold threat of Roman Catholicism—embodied, for the Scottish orthodox, by episcopacy and Arminianism—as the background against which expositions of the Song of Songs by Rutherford and James Durham fanned Protestant devotion by appeal to the affections. Albert Gootjes demonstrates the lasting theological legacy of John Cameron, whose authority was claimed by both sides in the later Pajonist controversies. Finally, Joel Beeke argues for continuity between John Calvin and John Brown of Wamphray’s doctrines of justification.

The final section, “Late Reformed Orthodoxy (c. 1690 Onwards),” examines orthodox theologians who attempted to navigate the challenges posed by Enlightenment metaphysics and epistemology, frequently through stylistic and methodological, if not substantive, accommodations. Paul Helm examines Thomas Halyburton’s engagement with John Locke on the issue of the authority of Scripture. Richard Muller argues for the essential orthodoxy of the views propounded by Thomas Blackwell, despite his rationalizing mode of reasoning, and juxtaposes him against the more scholastic style and method of the Marrow-men. Finally, Gerritt A. van den Brink argues convincingly that, through the mediation of Alexander Comrie, the soteriology of John Cotton made a lasting mark on modern theology drawn from the wells of Abraham Kuyper and Herman Bavinck—both of whom claimed Comrie as an authority (Kuyper citing him as standing in the line of Augustine, Calvin, and Voetius!).

The dizzying range of historical and contemporary reflections invites further thinking. Several issues are brought to light—theological (new holes in Barthian criticisms of federal theology), historical (fresh insight on the seventeenth century conflation of Arminians with Roman Catholics, a practice that endured in Scotland far longer than in England), and confessional (engagement with the alleged secularizing impulse of Protestantism, recently proposed by Brad Gregory). These issues are of sufficient depth and interest to have warranted a concluding chapter, which might have synthesized the findings and offered a crisper clarion call for further research. Regardless, the book will be a stand-by resource for future study of Reformed orthodoxy, not least in Britain. I warmly commend it to those interested in better understanding the dimensions of Reformed thought for which the Scottish orthodox remain quietly responsible.