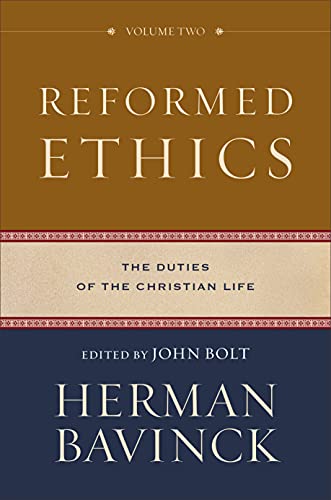 Reformed Ethics, Volume 2: The Duties of the Christian Life

A Bavinck craze is upon us. Significant works by Herman Bavinck are popping up with surprising frequency as some of his works are discovered and others are translated into English for the first time. Reformed Ethics, Volume 2, is one of the newly discovered volumes. After more than one hundred years it has recently reached the hands of readers, many of whom are only slightly less excited than those standing in line to watch a superhero movie on opening night. Bavinck readers are slightly less likely to wear costumes. John Bolt and his team of translators have delivered an excellent product again, following up on the earlier translations of Reformed Dogmatics and the first of three volumes in the Reformed Ethics set.

The story of the manuscript of Reformed Ethics is the stuff academics dream about. A handwritten document buried in the archives of a library came to light as the result of diligent research. In this case, the discovery was amplified because modern technology enables scanning, photographing, and rapid transmission of images so that the work of deciphering Bavinck’s handwriting could turn into the translation project that has become the volume just released by Baker Academic. Reformed Ethics required a bit more work than a straight translation because, as the editor notes in the preface to Volume 1, the original text was a set of notes, rather than a finished work. The work that is Reformed Ethics is a reconstruction of Bavinck’s material in Bavinck’s style by those deeply engaged in representing him faithfully, even when they dislike his biases. The most significant flaw of Volume 2 is that the history of the text is not reiterated for those who lack access to the previous volume. It is a story worth retelling, though no doubt there are good reasons for not repeating it.

The whole of Bavinck’s ethics is an exploration of what it looks like to love God and live a holy life in every stage of existence. Reformed Ethics, Volume 2, deals with the duties of humanity after conversion. Those familiar with the sub-discipline of Reformed ethics will find a familiar approach to moral thinking that builds on the positive and negative implications of the Ten Commandments. Readers careful in their reading will see how Bavinck keeps Law and Gospel together throughout to make a coherent, grace-filled portrait of the Christian life.

This volume is divided into nine chapters, which move from an overview of duties through duties toward God, those toward ourselves, and finally those toward our neighbors. The chapter numbering continues from the first volume, so chapters 13 and 14 frame the concept of duty against the philosophical and theological history within and without Christianity, arguing that in practice there are no morally neutral actions, and wrestling with the possibility of conflict among duties. In chapter 15, Bavinck shifts to duties toward God, focusing on fulfilling the First and Second Commandments. Then in the sixteenth and seventeenth chapters, the Third and Fourth Commandments are discussed respectively. Bavinck’s take on the Sabbath is strict by contemporary standards, but he warns against avoiding legalism.

Chapter 18 marks a shift toward the discussion of duties toward ourselves. Bavinck’s emphasis is on self-preservation that is balanced by self-denial to prevent selfishness; the body is good and must be cared for. The nineteenth chapter moves on toward concern for caring for the body specifically. Here the need for nutrition and a discussion of alcohol are prominently featured. Chapter 20 deals with the duties toward the soul, which include the prohibition of self-harm, including suicide, the need for chastity, and concern for the development of character. In these chapters it is easy to imagine Bavinck standing before a hall of exhausted, hungry students urging them to take better care of themselves. In the twenty-first chapter, the emphasis is on love of neighbor. Here Bavinck includes discussion of such matters as respect for the dead, passing on a legacy of faith, and the effect of proximity on moral claims.

The recurring feature of all of Bavinck’s ethical discussions is detailed research and careful reasoning through a Scripture-saturated world and life view. In his discussion of the ethics of opium, for example, Bavinck uses specific, current data for imports and exports to prove his point. Where appropriate he researches Buddhism and Hinduism as alternative perspectives, even when those views were a tiny minority of his likely audience. Given research methods when Reformed Ethics was composed, long before the convenience of internet search engines, Bavinck demonstrates a doggedness in research and a concern for accuracy.

The translators are to be commended for a thorough and helpful result, although the text of Volume 2, for obvious reasons, more closely resembles a reconstructed set of notes with more lists and less prose in comparison to Volume 1. The précis at the beginning of each chapter greatly benefits those encountering the material for the first time or seeking to remember the gist of Bavinck’s argument.

Reformed Ethics is a treasure, even for those who are only marginally interested in the ongoing renaissance of Dutch Reformed theology. These volumes have been sitting as a sort of time-capsule of orthodox moral reasoning, coming now as an antidote to the influences of modernity that threaten to drown out any other sensibilities. Bavinck is distinctly anti-modern while engaging thoroughly with modernity, which enriches his careful, principled approach and helps it transcend its own era. Of course, the fact that twenty-first century scholars are translating this earlier volume make it seem more relevant to our own era than a similar English language volume by one of Bavinck’s contemporaries. However, the value goes beyond the words chosen to the content itself.