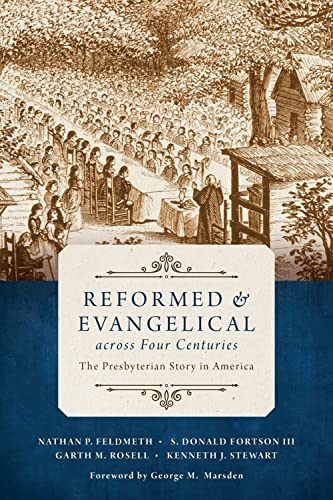 Reformed and Evangelical across Four Centuries: The Presbyterian Story in America

This book starts with a clear thesis in its main title and offers a sustained argument for that thesis, namely that the Presbyterian story in America is one of being both Reformed and evangelical. This story is often fraught with tension, embrace, or reserved distance, yet it is nevertheless a reality. The sub-title should be taken in the plural as this story overall is singular yet contains numerous sub-stories. So many aspects are considered in the main plot line, forming scenes in the narrative, whether it be theological controversies, ethical issues, church polity debates, key personalities, and culture. This is a co-authored work by four Presbyterian academics who come from different Presbyterian denominations in America, yet the work hangs together with a wonderful unity of voice. Feldmeth is ECO, Fortson is EPC, Rosell is PC(USA), and Stewart is PCA. Such cooperation brings historical balance. Some will be curious to know who wrote what section of the book. The authors have decided not to identify who authored what, likely for the very purpose of establishing that unity of voice and affirming this work as truly a team product.

There are two essential introductory paragraphs in this work. The first is the opening paragraph of George Marsden’s foreword, which sums up so much around four key distinctive strengths of this book: (1) a detailed and trustworthy new historical work; (2) a unique work which gives proper consideration to British backgrounds; (3) a work which sets forth the symbiotic relationships between American Presbyterians and American evangelicals; and (4) a work which takes into account the recent realignments amongst the more evangelically minded Presbyterians (p. ix). In the first paragraph of chapter one, the authors stress “the principle that the heritage of the Reformation came to us by diverse means; some of these were native to the regions from which our forebears came; others crossed national boundaries” (p. 1). Readers would do well to ponder these two paragraphs carefully when taking up this book. Of course, carefully reading the double-authored Fortson and Stewart preface (pp. xvii–xix) will help the journey immensely. They lay out very clearly, and I believe convincingly, the case for this book.

Some readers tempted to skip the first five chapters and begin with America in chapter six should recall Marsden’s commendation in the preface. This is one of the clear strengths of this work: the first five chapters build a case which is summarized in one sentence at the end of chapter five: “all points of view just described here as existing in England and Scotland [that is, inclusive of Ulster] had their counterparts in the American colonies” (p. 80). Now one is ready to proceed into chapter six, “New World Immigration and the First Presbytery,” and the remaining chapters.

These remaining chapters follow a basic chronological time frame and present a well-thought-out thematic title for each chapter. They are reflective of good planning and team effort, which makes for good readability. Chapters 6–19 provide an excellent overview, survey, and orientation to American Presbyterian history in the late seventeenth through early twenty-first centuries. Too often, there has been a marginalization, especially of the “smaller” branches of American Presbyterianism of the twentieth and early twentieth-first centuries. Readers should approach these chapters under the bridge of chapter five, where the authors effectively nuance the Bebbington quadrilateral on evangelicalism and see it as larger in scope than Bebbington did on dates.

The book does not use a select bibliography approach with each chapter or a final full bibliography. The footnotes are where one will obtain source information. These are helpful and appropriate to the engagement level of this book. There are three appendices, all of which will be helpful to orient readers to several current streams of Presbyterianism in the United States of America. Curiously, the Canadian church planting efforts of several American presbyterian denominations (BPC, RPCES, PCA, OPC, ARP, KPCA, KAPC) are not mentioned in this book, nor are there references to PCA, ARP, or IPC involvements in the UK. Perhaps the explanation is that the work focuses on Presbyterianism in the United States, with noted foreign mission involvements of the older mainline Presbyterians receiving justifiable attention (chapter 17 and the subpoint there “Reassessing Missions and Pearl Buck,” [pp. 267–70]). The book is inclusive of the various American Presbyterian streams, so this will greatly help readers position many of these streams and is a great step forward from dated works that fail to capture these.

The debates will carry on as to what is the truest form of Presbyterianism in history, so this book may unsettle some. However, Feldmeth, Forston, Rosell, and Stewart are well positioned to write on this subject and have surely given us a book that has been needed on the history of evangelical Presbyterians in America. The liberal Presbyterian may not like it, nor the particularist of a romantic strand. There will be critics who reject the evidence of a united ethos and values between American evangelicalism and evangelical Presbyterianism (without ignoring distinctives), but there will also be its champions. The evangelical Presbyterian is Reformed and, at the same time, evangelically ecumenical because of the very nature of the invisible church, which is not defined by or confined to a particular denomination.

This is a book that is needed to bring some counterbalance to American Presbyterian church history. I encourage seminaries to adopt this as a textbook for courses on this subject and foresee excellent discussion arising from assigning select chapters for class exchanges or seminars. It is pitched just right for courses but will also be welcomed by all serious readers. The conclusion (p. 319–29) should be a stirring call for evangelical Presbyterians, not just a pat on the back for some good heritage discussions. Get this book, fellow Presbyterians and fellow evangelicals. Many of the trajectories surveyed here are germane not only to Presbyterians but to other American denominational groups.