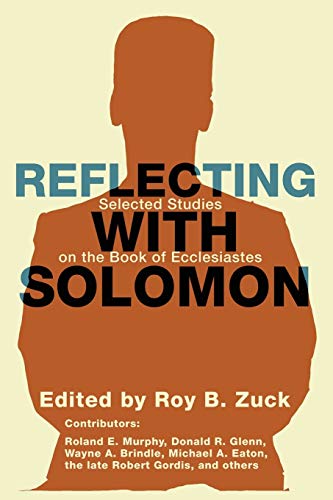 Reflecting with Solomon: Selected Studies on the Book of Ecclesiastes

This is the second anthology of articles and chapters that Zuck has compiled on one of three wisdom books in the OT. The other two are: Sitting with Job: Selected Studies in the Book of Job (Baker, 1993) and Learning from the Sages: Selected Studies on the Book of Proverbs (Baker, 1995). Each collection of essays includes from 27 to 34 authors who have written on the topics of genre, literary structure, authorship, themes, terminology, and an analysis of key passages in each biblical book.

Because many of these essays are difficult to obtain due to obscure vintage or widely dispersed locations, Zuck has performed a great service for the contemporary student and serious student of the Scriptures by making all the writers participants, as it were, of one large symposium. Each will serve as an ideal reader in a supplementary textbook list when teaching these books, whether in the educational programme of the church, college, or seminary levels.

Ecclesiastes has the reputation for being what J. Stafford Wright calls the ‘black sheep [book] of the Bible’, a judgment, no doubt, encouraged by the lack of agreement among scholars over just what was the scope and purpose in writing the book. That is why I was pleased to see the article from the July 1857 issue of The Biblical Repertory and Princeton Review on ‘The Scope and Plan of the Book of Ecclesiastes’ included. This was an unsigned article, but many believe it was written by William Henry Green of Princeton. This was the foundational article that I used to organize my understanding of the book when I wrote my own commentary of the book of Ecclesiastes. It is a delight to see it in print again.

The first chapter by J. Stafford Wright on ‘The Interpretation of Ecclesiastes’, from the Evangelical Quarterly of 1946, is a masterpiece in and of itself. Therefore, Zuck rightfully gave it pride of place as his first chapter. The next two essays by George R. Castellino and Addison G. Wright, though widely quoted and usually adopted in some form by modern expositors on Ecclesiastes, remain unconvincing in their 1968 understandings (as originally published in the Catholic Biblical Quarterly) of the plan and purpose of the book. Both divide the argument of the book into two major parts, though placing it at different junctures for different reasons, and assign different purposes for Ecclesiastes. But each is most stimulating. As with many of the chapters in this book, they will stir one’s interest in the problem and alert one to the presence of certain phenomena that otherwise might be missed.

One key problem is the correct translation of hebēl, a term that occurs 38 times in Qohelet. Graham S. Ogden concludes that it conveys the notion that life is enigmatic and mysterious; that it has many unanswered and unanswerable questions. But perhaps Kathleen A. Farmer’s advice is more strategic on forming a conclusion on what hebēl means: she advises that readers of the English text suspend judgment temporarily on the meaning of this metaphor and substitute the phrase ‘breathlike’ (or the like) for every place where texts presently have ‘vanity’, ‘meaningless’, or words of that ilk. In that way one can form one’s own opinion without drawing premature interpretive conclusions about its meaning.

It is impossible to review all 33 essays—and many have been reviewed previously elsewhere. But these selected studies should help younger students of Ecclesiastes to stand on the shoulders of those who have paved the way for greater advances in our understandings of perplexing, but most realistic, description of God, persons and things.