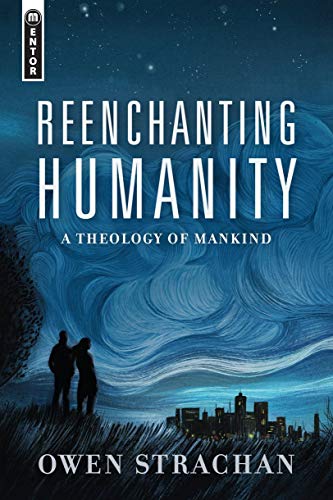 It is probably not a truth universally acknowledged that humanity needs a good dose of reenchantment. But it takes only a little reflection to realize that issues of anthropology lie just below the surface in many divisive contemporary discussions. Owen Strachan argues that the church can only address these challenges by a deep, faithful biblical anthropology. Repurposing a phrase from Charles Taylor, Strachan’s book aims to “reenchant” humanity by a fresh but historically informed reading of the Bible’s teaching about men and women as the image-bearers of God.

By an ontological anthropology (ch. 1), Strachan means an understanding of humanity that is grounded in an ontological bearing of the image of God, which not only distinguishes man from God but also man from other creatures. Humanity alone stands in this relationship to God. This high view of man’s origin must be balanced by a realistic view of man’s depravity, since “there is no tragedy like the tragedy of the historical fall of the human race” (p. 51). Thus chapter 2 addresses original sin and its subsequent effects on the human race. Yet even after the fall, men and women are called by God to tasks, and such work remains an intrinsic part of humanity. Chapter 3 discusses this topic, arguing that “work is a crucial part of a properly God-centered existence” (p. 103).

The longest chapter in the book is the fourth chapter on sexuality. Strachan argues from both the Old and New Testament for a robustly complementarian vision of sexuality and gender roles, including discussions of fatherhood and motherhood, singleness, and gender roles outside the home. He then addresses four cultural trends that compete with this vision: feminism, postmarital sexual libertinism, transgenderism, and homosexuality (p. 182).

Chapter 5 also touches on a controversial topic: race and ethnicity. Strachan lays out what he calls a “unitive anthropology” which recognizes the fundamental oneness of the human race, discussing how sin manifests itself in the specters of racial and ethnic prejudice (p. 218), and concluding with an exposition of the cross as the ultimate hope for racial reconciliation among the diverse people of God.

After this, chapter 6 discusses technology, giving a nuanced vision of human technological achievements as simultaneously a function of the image of God and yet also capable of serving human idolatry. Strachan helpfully discusses both posthumanism and transhumanism. Chapter 7 discusses the broad topic of justice, what Strachan calls an “ethical anthropology” beginning with the interpersonal sin of Cain and Abel in Genesis 4 and expanding to include the imprecatory psalms and the cross as the ultimate display of God’s justice. Chapter 8 is about “contingency,” under which Strachan discusses our dependent nature, relationship to time, and death. Finally, he concludes the book with a chapter on Christology, arguing that Christ as the true image and second Adam is the telos of the human race.

Even this brief survey of the chapters shows that Reenchanting Humanity covers a vast array of topics, which is arguably both its strength and weakness. As a textbook for a Bible college or master’s level course on anthropology, Strachan’s book would provide an excellent starting point for discussion of many vital topics. But, especially on more controversial issues (e.g., sexuality, race, and justice), Reenchanting Humanity will probably not be an adequate exposition for most readers, though Strachan’s footnotes should provide an entry point into the broader discussion. While this present reviewer shares most of Strachan’s positions, others may find themselves wanting more thorough argumentation and documentation.

That points to another strength and weakness of the book, the writing style itself. Strachan is a gifted wordsmith, and my copy now has many underlined phrases and sentences. Yet at times it seems well-crafted assertions begin to crowd out careful argument. For instance, discussing Adam’s role: “Coded into the man’s mind was the expectation that he would work in Eden; God had not placed him there to whittle away the time. He had both a provisional role … and a protective role” (pp. 133–34). While I am convinced that “provide/protect” are helpful summaries of Adam and the Christian husband’s role, the unconvinced (or opposed) reader may find this assertion well phrased but insufficiently supported.

There are also a few places where Strachan offers idiosyncratic (not unorthodox) theological positions with little comment, such as his assertion that Christ would have become incarnate apart from the fall (p. 63 n. 25; p. 359), or the statement that the Spirit-empowered Jesus “thus shows us what we may be by divine grace” (p. 366). Context makes clear that Strachan is not at all downplaying the divinity or uniqueness of Jesus, but he still leaves open the question as to how much of the ministry of Jesus may be seen as exemplary of what the Spirit-empowered Christian may achieve through union with Christ.

Overall, however, these slight issues do not detract from this much needed book. A careful doctrine of mankind is indeed necessary for churches in Western society, and Strachan has provided an accessible, yet informed volume meeting that need.