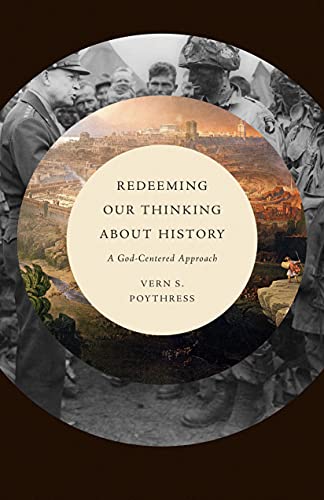 Redeeming Our Thinking about History: A God-Centered Approach

In this volume, Vern Poythress is interested in two commonly used senses of “History.” “First, it can mean the unfolding of past events in time and space. Second, it can mean a human study and recounting of past events.” Historiography, we are told, has three aspects, events, people, and meanings. History concerns events, is studied by persons, and pertains to the meaning of events. Meaning is not a subjective, human imposition, for God has pre-interpreted everything: “The meaning [humans] articulate can reexpress some aspect of meaning that God gives to events and their connections” (p. 35). Poythress stresses that these three aspects or perspectives “cohere, partly because they describe the very same meaningful events and partly because they have intrinsic coherence due to God being the ultimate source of all three” (p. 35).

The book has 26 chapters in five parts, with an introductory chapter on the importance of history for the Christian. Part 1 begins by considering several questions, “What is history? How should we write about it? How should we read about it and experience it?” (p. 23). Considering our involvement in small-scale historical events and their relation to larger pieces of history, Poythress concludes that history is complex, and its study involves choices as to what will be considered or left out. Historiography involves each of the aspects which have God as their source: God crafts events, gives them meanings, and controls the people involved in history (ch. 3). Poythress also recognizes a spiritual component to history in the antithesis of belief and unbelief (ch. 4). Focusing on any one aspect at the expense of the others leads to “reductionistic historiography” (ch. 5). The following three chapters address the complexities of persons, causes, and miracles in historiography.

Part 2 asks what the Bible can teach us about history, with particular attention to the narrative books. Poythress contends, among other things, that the Bible shows us unity in history, providing “a framework for the whole of history” (p. 88). However, this unity is complemented by the diversity of perspectives the Bible gives even to individual events, such as those the Gospels provide. Poythress concludes that the Bible has a unique role among all historical works as God’s infallible account of certain events and the broader framework that unites history’s diversity.

In part 3, Poythress asks, given that God is involved in history, “how do we identify his purposes?” Poythress argues that the Bible presents a two-level causal view of reality, with God acting as the primary cause through secondary causes. The main way the biblical historical books evaluate events is by the norm of prior divine revelation, which Poythress argues is a model for contemporary engagement with history: “In our day, we are supposed to pay attention to divine instruction as we now find it in the completed canon of Scripture” (p. 117). Poythress raises important cautions against overreaching interpretation (viz., Job’s friends) but argues that Psalm 78 commends an attitude that recognizes history as a witness to God’s glory and an opportunity for praise and thankfulness. Because God is active in history, it is legitimate even for an academic to explore primary causality, though we have no guarantee of infallibility. However, recognizing God’s hand in history rules out a “neutral” or presuppositionless approach. Poythress concludes this part with a reflection on the book of Revelation’s role in helping us discern that “this age is permeated with spiritual war” (p. 164).

Part 4 brings the principles of the previous part to bear on several areas of history. Poythress presents several approaches to early church history, arguing that interpreting the early church will involve judgments of right and wrong, especially concerning key doctrinal debates. He looks at the role of Scripture in making such evaluations of right and wrong and identifying God’s hand in history. Things get more difficult when we move beyond the church and biblical history. The limits of our knowledge should caution us. Nevertheless, even in the interpretation of foreign civilizations, we have some knowledge of God’s blessing and cursing.

Jay D. Green’s fivefold typology from the book Christian Historiography (Waco, TX; Baylor University Press, 2015) is the subject of the final part, along with two additional perspectives discussed in that book. Poythress finds some contribution in all five categories, arguing that they, along with the pursuit of excellence (not meaning conformity to the secular academia), provide compatible perspectives on the Christian historian’s task. In addition, he argues that the role of a Christian historian is a special calling from God, a Christian vocation. In Chapters 23, 26, and an appendix on Mark Noll’s approach, Poythress focuses on the issue of providence in historiography. He argues that the knowledge of God revealed in Scripture gives us a “sound basis to affirm a humble providentialism” (p. 211). Considering the challenges against providentialism, Poythress argues that the Bible encourages us to read this way but also affirms the dangers of being overly specific in doing so.

There are many insights throughout this work, yet the intended audience is not clear. Poythress addresses issues pertinent to academic historiography, and helpfully so, yet he also lingers in the shallows suitable for the popular reader, particularly in parts 1–2. The student perhaps stands to profit the most, benefiting from both dimensions. I found the discussion in parts 3–5 most stimulating. Poythress’s engagement with the issues of providence and discerning God’s purposes in history is a valuable contribution.