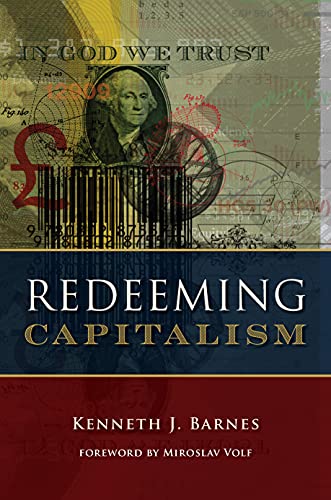 This book is a must-read for anyone committed to their fellow-citizens in an age of distrust of all things Western. It confronts us with the reality that, whatever its failings, capitalism is the only economic system that human ingenuity has come up with that has created real opportunity and prosperity, lifting countless people out of poverty and injustice across the centuries and the globe.

At the same time, it insightfully unpacks how capitalism has become so corrupted that it urgently needs redeeming. And it not only powerfully points to what needs to be done to reground capitalism on proper moral foundations, it identifies what those foundations are, how the regrounding might be done, and who might be best placed to take the lead in doing it.

In his introduction, Kenneth Barnes (professor of workplace theology and business ethics at Gordon-Conwell Theological Seminary) points out that the global financial crisis of 2007–2008 was not the near miss that many believe it was, but the first shot in a battle for the very soul of capitalism, a shot that scored a direct hit. He is surely right, for not only does that event still threaten us (because it was a debt crisis only temporarily resolved by the taking on of unimaginable mountains of new debt—both private and government), it has furthermore ignited a deep and destabilising distrust of modern capitalism.

Regrettably, that mistrust is not without basis. With devastating clarity, Barnes tracks us through the collapse of Lehman Brothers—the single financial institution that triggered the crash. What emerges is not just a picture of extraordinary moral laxity in the management of a hither-too trusted financial behemoth, but a clear window into the deep structural and moral fault lines that have come to characterise capitalism globally.

Barnes describes the development of financial derivatives and how, as a result of greed, perfectly legitimate, useful, and indeed legal instruments like them were used in highly reckless and frankly immoral ways to the point where totally unsustainable levels of indebtedness left huge businesses dangerously exposed.

Understandably, many argue that the answer must lie in better laws, and as we saw after the Royal Commission of Enquiry into the Banks and Financial Institutions in Australia in 2018, there is never a shortage of new ideas on offer. Some seventy new regulations and laws, with new levels of surveillance, policing and penalties, were recommended.

Barnes argues, surely correctly, that laws are not enough. Lehman Brothers collapsed in an environment of quite far-reaching prudential guidelines, yet not only did it fail, none of those responsible went to jail. Here, then, is the dilemma. When men and women won’t do what they ought to do voluntarily, they need to be compelled to do so by law. We demand that those who threaten us be obliged to operate under new restrictions. We bury ourselves under legal obligations and all the while our freedoms are silently but relentlessly wound back little by little.

Furthermore, Barnes reminds us, in a desperate attempt to avoid economic collapse, governments around the world bailed out many major businesses, effectively transferring private sector debt to the public accounts. This impacts citizens in two major and deeply concerning ways: it means that they must pay the interest on vastly inflated government debt through a combination of increased taxation burden and reduced government services, and it has seriously exacerbated the generational wealth divide. This is because in an attempt to both revitalise economies and devalue massive public debts, governments have been effectively ‘printing money’. The outcome has been flat-lining real wages but considerable asset appreciation, in turn creating a serious intergenerational equity crisis, as those who hold property become richer while their children cannot afford housing.

And so, the author turns to the question of morality, and not only sketches out the classic and Christian virtues (i.e., prudence, justice, courage and temperance) but also mounts a convincing case that the early capitalists understood and—mostly—operated under those virtues, and that the key to redeeming capitalism now lies in resurrecting them.

Prudence, Barnes reminds us, was defined by St Augustine as ‘the knowledge of what to seek and what to avoid’ (p. 11). It is far more than mere caution; it is the subjugation of desire, or motive, to the principle of goodness or value, thereby producing virtuous actions. Justice, as Aquinas described it, is ‘a stable and lasting willingness to do the just thing for everyone’ (p. 13). It is necessarily aligned to the subordinate virtue of truthfulness. Courage ‘keeps the will steadfastly attached to the good’, wrote Aquinas (p. 15). Among other things, it will oblige people of power and influence to be honest and to admit mistakes. Temperance (or moderation) is ‘a special virtue of restraint operating in fields in which we find ourselves specially and exceptionally attracted’ (p. 16). It is aligned to the subordinate virtues of ‘mildness, clemency, and most of all, humility’ (p. 16). This, in turn, checks our pride, which is the basis for all manner of wrong behaviour.

These virtues have been abandoned, even lost, by many in the West, and have been replaced by moral relativism. Key to the book’s message is the proposition that just as our culture once operated in a vastly different moral universe, which also included the Christian virtues of faith, hope and love, so did business. And just as our culture has degenerated as a result of the loss not only of the almost universally accepted ‘cardinal virtues’, as well as the more specifically Christian virtues, so has that peculiarly Western—even Protestant—economic system of capitalism.

Barnes’s explanation of the influence of Christianity upon the development of capitalism is compelling, and will make fascinating reading for many with an interest in history. Calvin, for example, ‘rejected any compartmentalization of a believer’s life’ (p. 112). All of life, including economic activity, should be lived according to God’s precepts and in response to God’s grace. Furthermore, everyone has a moral responsibility to look after their neighbour’s property, and to help those in need. As Barnes illustrates in chapter 3, even Adam Smith, seen as the intellectual father of capitalism and so often demonised by those who rail against it as being based on greed and the profit motive alone, plainly believed that good business requires good moral behaviour.

As capitalist societies have lost their religious moorings, ‘behavior once considered indecent is now celebrated’ (p. 140). The accumulation of wealth and ‘a hedonistic tendency toward excessive self-indulgence’ (p. 140), are seen as desirable, even virtuous, in postmodern society. Worse still, instead of growing in compassion for the poor, ‘our culture has developed a contempt for the poor’ (p. 140). This, needless to say, is deeply unchristian.

Barnes believes not only that we must but that we can redeem work, business, and money and markets—the three building blocks of our economic system. He sees it as a journey, not as a destination, and argues that it ‘will likely begin—and in some respects has already begun—in the religious sector’ (p. 206); that is, among Christians.

It is tempting to dismiss this as naive. Not only does it seem that the business world is hostile to notions of interfering and meddlesome do-gooders, many Christians themselves are (in my view) either disinterested or too ‘otherworldly’ to want to defend business, let alone seek to reform it. Many have also fallen prey to the idea that profit is a dirty word. (But provided that there is no coercion involved, it is the very fuel of poverty-busting machinery whereby one who has an excess of, say, woollen sweaters exchanges one for a loaf of bread and both parties benefit; i.e., profit.)

And yet, as the author points out, the tools at our disposal are powerful, if we will but use them: faith, hope, love, prudence, justice, courage, temperance, wisdom and common grace.

As I contemplated Barnes’s belief that we can make a real difference to the economic and social conditions of our world, it struck me that he has history on his side. The great Christian social reformer, William Wilberforce, is best remembered for his role in abolishing slavery. However, he was equally proud of his role in the massive reformation of the world’s biggest business at that time: the British East India Company. Effectively, the Company was ‘England in India’, and it behaved outrageously in its pursuit of profit. Wilberforce drove a totally new charter through the Parliament that obliged the Company to revolutionise the way in which it operated in India. The new charter was rewritten to reflect real virtues, and when coupled with the way in which the Evangelicals had so influenced British society as to make it almost fashionable to behave well, the effect was a genuine journey of transformation. Missionaries were allowed in, schools were opened, the appalling practice of suttee (the burning alive of widows) was outlawed, commerce was made fairer and, over time, millions benefited from efforts to counter the effects of the regular natural disasters that so often blighted the poor in particular. With hindsight, we might argue against colonialism, but that does not alter the reality that massive and humanitarian reform was driven, unexpectedly but effectively, by compassionate Christian men and women.

I am not persuaded by every aspect of the book. For instance, I believe Barnes is overly optimistic when he finds hope in the current rush by many business leaders to insist that they care about social and environmental issues. In my view, a great deal of it is shallow ‘virtue signalling’ in recognition of the low esteem in which they are now held rather than a sincere re-embracing of the classic and real virtues. It often amounts more to trying to placate the culture than lead it to a better place. I also believe that he underestimates the loss of understanding of, and therefore ability to recognise, those virtues in mainstream culture (though his native North America may be different to mine).

But these are minor quibbles, and in any case much the same general moral confusion confronted the great Evangelical reformers in Wilberforce’s day, and yet the reformers triumphed over time.

Redeeming Capitalism is a superb and very important book, and I could not recommend it more strongly. I hope that like Wilberforce’s famous book on real Christianity it sells vastly more than the publisher dared dream!