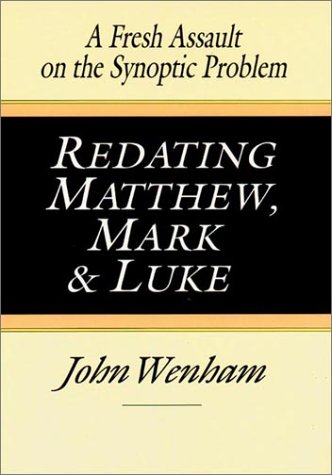 Given the continued intractability of the synoptic problem, maybe it is time to question the method. And since the fundamental methodological presupposition has been the assumption of literary dependence, then it may need to be jettisoned and the solution sought along other lines. This is the burden of Wenham’s Redating Matthew, Mark and Luke—a book whose emphasis on the essential orality of the tradition and the reliability of early patristic evidence mounts a challenge to the scholarly consensus which is perhaps no less radical than Robinson’s work whose title it consciously echoes.

For Wenham the crux of the problem lies in explaining the ‘almost infinitely complex range of likenesses and unlikenesses’ between the synoptics. Complete independence is untenable. Likewise, the idea of an evangelist struggling manfully to balance up to three documents upon his knees—tables were not used for writing until long after the gospels were written—as he flits back and forward from one to the other like a literary version of old farmer Macdonald borrowing and modifying ‘here a word, there a clause, everywhere a phrase, phrase’ is incredible and not a little anachronistic (and this with scrolls no less). It not only flies in the face of the far simpler borrowing techniques demonstrably employed by ancient authors but its improbability is only emphasized by the convolutions entailed in e.g. Goulder’s ingenious work on Luke or Griesbach’s ‘hopscotch’ theory of Mark’s use of Matthew and Luke.

While not denying the presence of some direct literary dependence, Wenham proposes (or ‘resubmits’, since a similar approach was widely held in the previous century) what initially strikes this reviewer as a more sensible and realistic approach: likenesses have less to do with one evangelist’s direct modification of another than with their common origin in the oral tradition of apostolic preaching. Thus evangelists wrote fundamentally what they were ‘accustomed to teach’; although they may have ‘from time to time refreshed their memories’ from what others wrote.

In a carefully constructed and clearly signposted argument, Wenham begins by establishing that Luke knew Mark. He argues that (i) Luke used Mark as a guide for his narrative framework in the first and third sections of his work, and (ii), on the basis of Luke’s treatment of that material, which shows considerable evidence of common origin, that, although Luke seldom adheres to the actual Marcan wording, he is faithful to the sense of his source. Given that the same fidelity can be shown for Matthew, Wenham concludes that the marked differences in Matthew’s and Luke’s treatment of ‘Q’ suggest that there is no such document, nor that Matthew or Luke used each other in the so-called ‘Q’ passages. (Only in the great sermon and the preaching of John the Baptist does Wenham see some literary dependence.) Instead, the so-called ‘Q’ materials are better understood as reflecting those variations as might reasonably be expected in an itinerant ministry (did Jesus really only say things once?) or might derive from another recollection of the same original discourse. Next, Wenham contends that four of Streeter’s five points are reversible and, Styler’s defence notwithstanding, seeing Mark as subsequent to Matthew makes more sense of the data especially if Mark is seen not as a replacement but a supplement to Matthew.

As a self-confessed Augustinian, Wenham then concludes that there is not a little support for this view, with Levi (= Matthew) as the only ‘man of letters’ among the 12 being best placed to provide the first written gospel. Originally in Semitic form, as comparison with Mark indicates, it does not reflect tensions between synagogue and church but rather the conflict between Jesus and the Jewish authorities.

The second part of the work, which is logically independent of his solution to the synoptic problem, tackles the question of authorship and dating from a perspective which refreshingly grants some credence to early patristic sources. Harnack was right about Acts being written before Paul’s death (c. 62)—it is not about how the gospel came to Rome but rather how Paul did. Luke-Acts was not published as one two-volumed work (they never circulated so in the textual tradition), with Luke being written during Paul’s Caesarian imprisonment (c. 57–59) or, if 2 Corinthians 8:18 refers to Luke’s fame as the author of his gospel, then even earlier (c. 50–55). Mark, written before Mark’s founding of the church in Alexandria, was in response to Peter’s leaving Rome for Antioch (c. 45), while Matthew, universally held in church tradition to be the first gospel, was written around ad 40; perhaps just before the dispersion of the 12 from Jerusalem. The final chapters cover issues such as scribal and literary techniques and questions concerning the lack of any NT references to the gospels which necessarily arise if early dates are posited.

It is a strength of Wenham’s book that he readily admits that there are no knock-down arguments either way, but the combined weight of reasoned probabilities makes his case an attractive one. Not that it is without problems—not all of his arguments are equally convincing (and I’m sure that scholars more familiar with the intricacies of the synoptic problem may be less easily persuaded). After informing us that the gospels were likely to be written early in order to provide a norm in the scattered Christian communities, and to aid instruction when qualified teachers were absent, we are later told (in answer to why there is no reference to them in the NT) that in the early church it was much easier to instruct orally than to bother with lengthy scrolls. On another tack, as Wenham himself seems to appreciate, he has indicated a way in which the synoptics could have originated; whether or not this ultimately convinces as the most reasonable explanation remains to be seen.

Nevertheless, this thought-provoking book is to be welcomed, and this short review cannot hope to do justice to the breadth of argument and information it contains. I can only hope that it receives the widespread and unprejudicial reading it deserves. I discovered only one typographical error: an additional ‘the’ on p. 236. (A final plea to the publishers: is it not possible in this day of advanced word processors to forgo forever the infuriating habit of having endnotes which make reading a nightmare and in paperback form stir up continual anxiety that the spine will not survive a thorough read?)