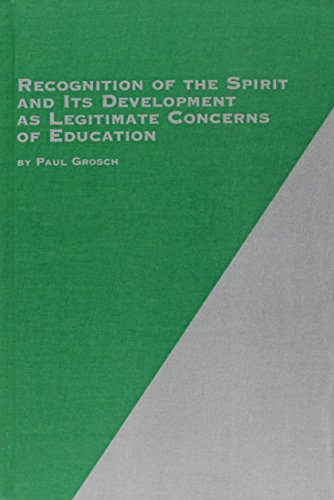 The central arguments of this book by Paul Grosch are that (i) spirit simply denotes ‘the living of a complex life’ (3) and (ii) philosophy is ‘principally, but by no means exclusively, to do with the nature of the spiritual life’ (7).

In the first main section of his book, the author examines in turn four competing views of spirituality (15–61). He welcomes Sandra Schneiders’ view that spirituality should be studied as a separate academic discipline because it separates spirituality from theology but he regrets that she does not accord philosophy more importance among the disciplines that she says contribute to the study of spirituality. Grosch also welcomes Philip Sheldrake’s view that links between spirituality and other disciplines should be recognised but he is unhappy with his continuing to give theology the inside track among them. Grosch agrees with David Hay’s taking a starting-point elsewhere than in theology but he wants to insist that spirituality is primarily social, rather than biological. Grosch approves of the place given by David Carr to philosophical analysis of spirituality but he regrets that he moves from what initially seemed to be a theologically neutral and philosophically rigorous approach to one that is driven by a theological belief.

Grosch then moves to look at philosophy as ‘the spiritual education of the self’ (63–113). He suggests that our view of philosophy is too concerned with ‘the schools and traditions which are its by-product’ (70) and too little with what it is that philosophers actually do. Philosophy’s ‘first-order activities’ (75), he maintains, are spiritual, i.e. they are to do with the living of a complex life. He draws upon Philo’s list of spiritual exercises (research, thorough investigation, reading, listening, attention, self-mastery and indifference to indifferent things) (79) refined by Pierre Hadot into four means of learning (learning to live, learning to die, learning to dialogue and learning to read) (83) and ‘hinted at obliquely’ by Wittgenstein (113). For an analysis of these activities, he draws also upon the work of both Michael Oakeshott and Alasdair Maclntyre.

But the philosopher upon whom Grosch relies most is George Santayana and the third and final main section of his book is entitled ‘Santayana and the Philosophical Nature of Spirit’ (115–65). Santayana was firmly committed, Grosch argues, to a monism that holds there is only one substance in the cosmos and that substance is matter (130). Grosch goes on to suggest that Santayana can be seen as ‘the first twentieth-century postmodernist, demonstrating a justifiable “incredulity towards metanarratives” some forty-four years before Lyotard did’ (144). It is from Santayana that Grosch draws his closing definition of the purpose of philosophy: ‘to refine the spiritual realm of our existence, not some other-worldly self or arena, but the ultimate and realisable expression of our material being’.

This book is both wide-ranging and rigorous. It is refreshing to see philosophy called back from abstract logical analysis to a focus on the big issues of living and dying. It is also good to find an emphasis on the multi-disciplinary nature of the study of spirit, an opposition to various forms of reductionism and a recognition of the wholeness of the human person. Throughout the book however there seems to be a hostility to theology that is rooted in a materialism that fiercely opposes all talk of afterlife and seems to ignore the possibility of bodily resurrection. It is therefore surprising to find the book ending with strong commendation of Parker J. Palmer’s view of education as spiritual formation through spiritual disciplines. Grosch allows that Palmer is ‘avowedly more religious than Santayana’ but, he insists, ‘the message is still the same’ (173). To those of us who see Palmer’s Quaker Christian faith to be everywhere the substratum of his view of education, it is very hard to see his message to be ‘the same’ as that of Santayana or of Grosch himself. Only by reducing prayer and other spiritual disciplines to activities that have no reference to a specific God can this move be made and that is surely another form of reductionism.

One closing remark: it is surprising to find in these days of the word-processor such a profusion of typographical errors in a single volume.