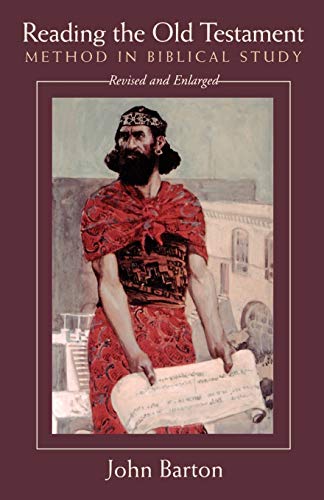 John Barton is Lecturer in Old Testament Theology at Oxford University. The scholar to whom he seems most in debt is James Barr. Apart from Brevard Childs, whose canonical criticisms fall under special attack, Barr is the most frequently cited author, and he is always cited favourably.

As Barton twice states, in the introduction and in the conclusion, the aim of the book is

to survey the methods currently used in the study of the Old Testament in such a way that it becomes clear how they are interrelated, and what goals they are meant to achieve; to set Old Testament study against a wider background of literary criticism; and to argue a case against the pursuit of ‘correct’ methods (p. 198).

The first four chapters are a fine introduction to the various ‘criticisms’ that one hears thrown around. For the beginner he begins slowly. Chapter 1 deals with genre recognition and is very helpful in outlining this whole idea to those for whom it might be new or mysterious. The second chapter takes up ‘ “Literary” Criticism’, or what is often called ‘source criticism’. Not only are these methods treated lucidly with illustrations but their connection or evolution is made clear.

The third chapter moves on to ‘Form Criticism’. Again Barton is helpful in outlining its meaning and use in reading the OT. The next chapter is devoted to ‘Redaction Criticism’, and once more it becomes plain how this further step developed in scholars’ quest to read the OT with understanding.

Chapter 5 is devoted to an illustration of how these methods work in a simple book, Ecclesiastes. If one only read the book this far, one would have got one’s money’s worth. An entertaining summary of these methods illustrates the kind of interesting style the author can have.

Source critics like nothing better than a narrative that is repetitious, inconsistent and rambling; form critics thrive on gentlemanly, incoherent collections of unrelated sayings …, and delight in stereotyped formulas and conventional phrases. With redaction criticism we find that even the genealogies, stock-in-trade of bad jokes about the unedifying quality of the Old Testament, have become interesting and theologically significant (p. 47).

Chapters 6–9 take up the two latest tracks in OT study, the Canonical Approach of B. S. Childs and Structuralist Criticism represented by various authors. Childs receives the most unsympathetic, albeit gentlemanly, treatment. He is even compared to the most unpardonable and unenlightened variety of approaches, fundamentalism! (pp. 98f.)

As Barton suggests on p. 7, chapters 10–12 might be skipped in the first reading.

This review cannot go into these views in any detail except to say that Childs’ system as a ‘text-immanent’ interpretation is concerned primarily, if not exclusively, with a given text as it now stands in the canon. The structuralist focuses his attention on ‘shape, genre and conventions of the text’, refusing to ask questions about authorial intent.

The main point Barton has to make is that none of these systems can answer all the questions. Anyone who thinks so will sooner or later meet with frustration and contradiction. It would be the part of wisdom to take what is usable in each for a given text and continue the pursuit of what the author likes to call ‘literary competence’ (pp. 199 et al).

Miracles then and now

Paul and the law: observations on some recent debates

Process theology: a survey and an appraisal

Law and Theology in Deuteronomy

Reviewed by Ernest Lucas
Old Testament
VIEW ALL VIEW ALL