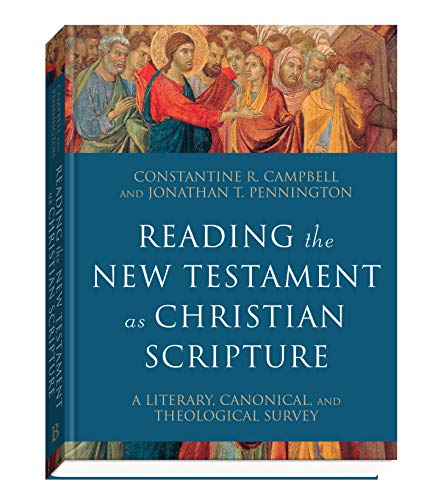 Reading the New Testament as Christian Scripture: A Literary, Canonical, and Theological Survey

Those of us who teach Old and New Testament introductions at evangelical institutions have long hoped for a textbook that covers not only the historical and literary features of the text but also its theological message and canonical shape. While there are many useful OT and NT introductions on the market, and while each of these in its own way capably familiarizes the reader with the background, text, and themes of the biblical books, none until now has also incorporated to such a degree the theological nature and message of the testaments as a whole and the books which comprise them. Campbell and Pennington’s Reading the New Testament as Christian Scripture should thus supplant other NT intros, because it combines the best of what is included in its predecessors with material that fills a serious lacuna.

The authors begin by introducing the reader to the concept of the NT as Christian Scripture. In this initial chapter, Campbell and Pennington explore what it means to read the NT as a disciple of the Triune God, the God who has made himself known in the person and work of Jesus Christ. This is not to preclude non-Christians from reading the NT beneficially or with understanding; on the contrary, the authors clearly state that “anyone can read the New Testament” (p. 4). They are also clear, however, that “to read the New Testament as Christian Scripture is to read it so as to become conformed to the image of Christ himself, imitating the apostles, who themselves were imitating/following Jesus (John 13:12–15; 1 Cor 11:1; 1 Pet 2:21). Anything less than this transformative pilgrimage is less than a Christian reading of the New Testament” (p. 4). They end this first chapter by exploring what it means to read the NT as the second part of one book alongside the OT, why the term “New” is applied to the second testament, and why the word “Scripture” is used to describe its contents. Finally, the authors give a “lay of the land” for the rest of the book, noting that each chapter is intended primarily to help students “thoughtfully read the text of Scripture themselves” (p. 9), includes bolded terms that are included in a glossary, and uses different “sidebars” to give students more information in five categories: historical matters, literary notes, theological issues, canonical connections, and reception history.

The authors also include introductory chapters on the NT as a book (concerning matters of canon, textual transmission, and translation), the world around the NT (concerning the Jewish, Greco-Roman, and early Christian contexts), and Jesus’s life and teaching. In addition to these “stage setting” chapters, there are also chapters on the fourfold Gospel book, Paul’s life and teaching, and reading the NT as Christian Scripture in the 21st century. Most of the book, however, simply consists of chapters on individual books or, in some cases (e.g. 1–2 Timothy and Titus, 1–3 John), sets of books.

Each chapter contains three sections: orientation, exploration, and implementation. Most space by far is devoted to the middle section, in which the authors introduce students to key themes and teachings of each book, and also direct students to read certain passages of the book related to those themes and teachings. Background issues like authorship and date are still covered under the “Orientation” section, and the authors make sure to connect each book to today in the “Implementation” section, but, as they stated in the beginning, Campbell and Pennington really do want to focus on helping students read the text. This is evident in the way the chapters are organized and also in how much time they spend in the “Exploration” sections.

As far as NT introductions go, Reading the New Testament as Christian Scripture ought to be at the top of every professor’s list. For those who teach NT survey, Campbell and Pennington hit all the right marks with respect to introductory issues; in other words, they capably introduce students to historical matters and come to what we might call theologically conservative conclusions regarding issues of authorship, date, and the like. But they do not stop here, or only cursorily survey the literary themes of the NT books, but instead offer something new: a theological primer on the NT that situates the reader in the context of Christ’s church throughout space and time. Helping students to read the NT not only to mine its historical background or to see its literary shape but also and ultimately to understand its theological teaching and to be transformed by its message ought to be our goal in evangelical institutions. Campbell and Pennington have provided a path for just that kind of course: one which teaches students to read the NT not just for information but transformation, not just in its historical and literary contexts but in the context of the faith once delivered to the saints.