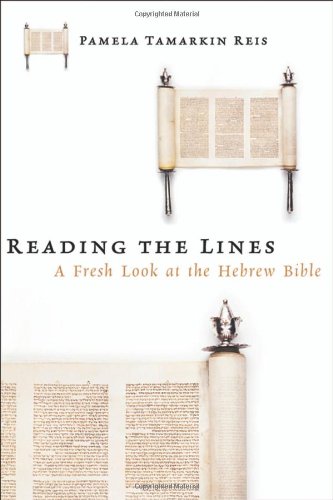 READING THE LINES: A FRESH LOOK AT THE HEBREW BIBLE

Pamela Reis is an independent Jewish scholar whose articles, previously published in respected journals of Jewish and OT studies, are presented here as a collection. Her approach represents the ‘modern orthodox’ Jewish position, combining a conservative view of Scripture with traditional Jewish exegesis (midrash) and contemporary literary theory. She addresses eleven interpretive cruxes in the Hebrew Bible, with an interest in close readings offering novel solutions to old problems, and defending the authenticity of the text in the light of critical views.

What is engaging about the volume is not so much the breadth of scholarship (which is impressive) or the attractiveness of the proposed solutions (not all of which are equally persuasive) as the documenting of the process of enquiry which is followed. It is rare indeed for a biblical scholar to interweave personal anecdotes, autobiographical admissions, references to TV sitcoms, her daughter’s wedding and the general bricolage of the scholarly quest with their exposition of the text! The clear and unpretentious style combines the thrill of the chase with the exegetical and hermeneutical reflections of a biblical detective story.

Focusing primarily on the Pentateuch, Reis ponders alleged missing links, gaps and inconsistencies in response to the challenges of the source critics. She brings an ‘empathic sensibility’ to the passages, seeing them as integrated, intelligent literary masterpieces. She presents a series of close readings and original interpretations of problem passages, where the approach modelled is of as much value as the conclusions drawn.

For Reis the creation stories in Genesis 1 and 2 are not by separate authors but reflect separate points of view, just as Kurosawa’s film Rashomon, a single work by a single artist, presents a series accounts of the same incident which are both contradictory and overlapping at the same time. The author speaks in many voices, telling essentially the same story in contrasting ways, with different emphases, to engage the reader.

The difficult text of Genesis 4:8 is not a textual error but is best understood as the process of Cain’s thought and speech against Abel which leads to murder, the Hebrew verb amar being used for its deliberate ambivalence. The working of Reis’s imagination is idiosyncratic but suggestive as she records her mental processes.

Following Cassuto, Reis sees the Wife-Sister motif in Genesis echoed in the Exodus events, 1 Samuel 4–6 and 2 Samuel 6, giving a broader theological reading of the passages, and arguing for their authentically against the source critics, as they are not repeated ‘by mistake’.

The ‘Bridegroom of Blood’ incident in Exodus 4:24–26 is explained as God allowing Moses to this into a deep depression engendered by his ambivalent self-image. Not all will be persuaded by such a reading, but the down-to-earth approach, linked to critical engagement with the texts and commentaries, leads to a refreshing and stimulating study.

Other topics included are the stories of Hagar; Jepthah’s daughter; David’s flight from Saul; Saul and the Witch of Endor; the rape of Tamar and the man of God in 1 kings 13, all of which link critical reading and with creative and original response.

The appeal of the book is as much due to the personality of the author as it is to the conclusions of her research. Her own agendas, defending the integrity of Scripture, challenging the critical scholars, re-assessing the feminist readings, are not disguised. But we too are left enriched as we are challenged to assess our own assumptions in the light of Reis’ encounter with Scripture.