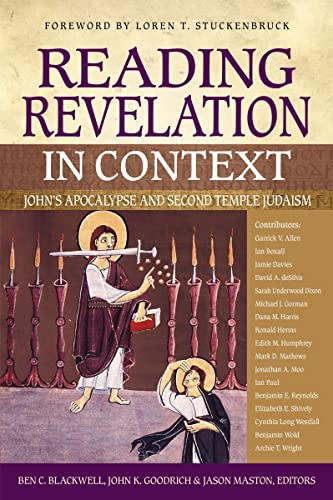 Reading Revelation in Context is the third book in a series by Zondervan Academic that has thus far included Reading Romans in Context (Grand Rapids: Zondervan Academic, 2015) and Reading Mark in Context (Grand Rapids: Zondervan Academic, 2018). The editors of each volume in the series have been the same, though the array of contributors has varied from volume to volume. Each volume compares a particular biblical author/book with one or more thematically related Jewish texts, introducing and exploring the similarities and differences between them. In sum, the essays ultimately seek to show how comparative texts illuminate our understanding of the particular biblical author/book.

This volume contains twenty essays, each around seven pages long. Each essay begins with a few themes from a Jewish text, followed by a comparative look at a passage from Revelation, and concludes with further reading for those interested in a deeper look at critical texts and secondary literature.

The first essay, by Benjamin E. Reynolds, compares the Parables of Enoch and Revelation 1:1–20, noting the ways both texts interpret Daniel’s Son of Man figure differently. The second essay, by Mark D. Mathews, compares the Epistle of Enoch and Revelation 2:1–3:22, keenly identifying both texts’ shared theme of rejecting worldly economic systems. David A. deSilva wrote the third essay, highlighting the differences between The Testament of Levi and Revelation 4:1–11, most notably “the emergence of Christ as the focal figure of God’s redemptive and judging activity” in Revelation (p. 57). The fourth essay comes from Dana M. Harris, who compares 4 Ezra and Revelation 5:1–14 and shows that Christ (the Lamb) is worthy to be worshiped on the throne alongside God, whereas Ezra was only worthy to receive secrets from God.

The fifth essay, by Ian Paul, compares 2 Maccabees and Revelation 6:1–17, deftly showing that Revelation’s emphasis is on God as the eschatological judge over and against the focus on military victory in 2 Maccabees. Ronald Herms then compares the Psalms of Solomon and Revelation 7:1–17, arguing that both texts show positive “marks” or “seals” given to God’s people, though the identity of those who will receive the seal of God (contrasted with the “mark of the beast” in Rev 13) is not established as early as in Psalms of Solomon for various reasons. The seventh essay, by Jason Maston, compares the Testament of Adam to Revelation 8:1–13, showing how “the silence in heaven” in both texts as the martyrs cry out for vindication ultimately “tells us that God hears our prayers and will act to vindicate his people” (p. 85). Ian Boxall follows Maston with a comparison of the Animal Apocalypse and Revelation 9:1–21, illustrating how God in Revelation is in full control of evil forces, whereas the Animal Apocalypse shows a creation in disarray.

John K. Goodrich compares Jubilees and Revelation 10:1–11 in the ninth essay, highlighting how both texts reveal the seer’s “remarkable authority, causing the message and its messenger to become barely distinguishable” (p. 100). Garrick V. Allen then explores the loose connection between 4 Ezra and Revelation 11:1–19, skillfully emphasizing Jesus’s exaltation over the “two witnesses” in Revelation, whereas 4 Ezra treats the “man from the sea” as a messianic figure. The eleventh essay, by Archie T. Wright, compares the pictures of Satan in the Life of Adam and Eve and Revelation 12:1–17, noting that Revelation does not give as much detail about the fall of Satan in comparison to the Life of Adam and Eve. Jamie Davies tackles the difficult “blasphemous beasts” passages in 4 Ezra and Revelation 13:1–18, concluding that these passages help us remember that the primary reference for the beast figure is in the first century, rather than “endless decodings and wild speculation” about which current political figure might be the beast (p. 121).

Ben C. Blackwell wrote the thirteenth essay, comparing the Damascus Document (CD) and Revelation 14:1–20, rightly noting the Lamb’s role in Revelation in “how humans experience heavenly realities here on earth” (p. 129). Benjamin Wold follows Blackwell by engaging the plagues/exile motifs in the Words of the Luminaries (4Q504) and Revelation 15:1–16:21, observing Revelation’s emphasis on the future exodus, whereas Words of the Luminaries focuses more on the past. The fifteenth essay, by Edith M. Humphrey, explores the portrayal of women in Joseph and Aseneth and Revelation 17:1–18, comparing how their portrayals urge readers toward wisdom. Cynthia Long Westfall then surveys the anti-imperial themes in the Epistle of Enoch and Revelation 18:1–24, concluding that both offer a strong critique of the nations’ wealth and power, however, Revelation does not ultimately give readers power over Rome.

In the seventeenth essay, Michael J. Gorman compares the Psalms of Solomon and Revelation 19:1–21, emphasizing the significance of Jesus in the Revelation’s conquest narrative. Elizabeth E. Shively follows Gorman with an essay comparing the role of fallen angels in 1 Enoch’s Book of Watchers and Revelation 20:1–15, concluding that Revelation allows Satan a longer leash than the angels in the Book of Watchers to emphasize that “out of the obliteration of Satan’s pseudo-reign emerges the new heaven and earth” (p. 166). Jonathan A. Moo compares 4 Ezra and Revelation 21:1–22:5 in the penultimate essay, reiterating the point made by other contributors in this volume: the Lamb as the centering figure of John’s apocalypse gives a unique conception of life now and in the age to come. Sarah Underwood Dixon closes the volume with her essay on the Apocalypse of Zephaniah and Revelation 22:6–21, expertly presenting one of the most important themes of Revelation: “The angel asserts that John must worship God alone, and the context makes clear that the worship of the exalted Christ is an appropriate and indeed required expression of his monotheistic devotion” (p. 180).

Reviewing multi-contributor volumes is always a double-edged sword. On the one hand, it is difficult to both summarize and engage a volume with twenty introductory essays about complex textual and theological issues. On the other hand, when a multi-contributor volume is organized well and the contributors have a clear vision, it provides the reader with the ability to easily absorb the volume’s topic. This volume falls into the latter category. The editors successfully presented a massive subject—a comparative analysis of John’s apocalypse with second temple Jewish literature—in a digestible and thoughtful volume.

Further, this reviewer is thankful for the underlying commitment laid out in the Introduction: “comparative studies are (or should be) just as interested in exposing the theological differences between texts as observing their similarities” (p. 27, emphasis original). Indeed, oftentimes comparative studies in this field assume that one can learn more about John, for instance, from the assumed influence of extrabiblical texts rather than from his own writing. This volume helpfully demonstrates the importance of historical backgrounds and comparative studies, while not sacrificing the truth that Revelation is divine Scripture and is a distinct apocalypse that centers on Christ. Pastors, students, and scholars would do well to read this volume and follow with further research as an essay piques their interest.