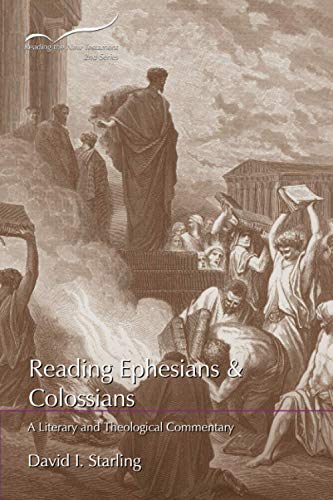 Reading Ephesians and Colossians: A Literary and Theological Commentary

Volumes in the Reading the New Testament: Second Series are written for a wide audience and “attend not only to lexical, historical, and critical concerns but are also attuned to and interested in…literary matters and theological meaning” (p. xi). David Starling is the Chief Academic Officer at Morling College (Australia), where he teaches New Testament, hermeneutics, Greek, and theology. Starling has published widely within Pauline studies, and the breadth of his scholarly output makes him well suited to produce a commentary on these two epistles.

Starling’s approach to critical issues on these two texts follows conventional evangelical positions. While acknowledging the various challenges to the Pauline authorship of Ephesians and Colossians, Starling successfully defends the traditional view on the authorship of both texts. Concerning the dating and provenance of Ephesians and Colossians, Starling argues for a Roman provenance and suggests they were written between AD 60 and 62. Starling describes Ephesians as a circular letter (possibly to be equated with the letter to the Laodiceans mentioned in Col 4:16) intended “to deepen and confirm the readers’ sense of identity as Gentile Christians and … to fortify their resolve in the face of an intimidating array of hostile powers” (p. 12). Colossians, according to Starling, was similarly composed by Paul “to strengthen and encourage the readers, reinforcing their sense of identity and their confidence in the supremacy of Christ,” but also with the added aim of encouraging the Colossian believers to resist the “Colossian heresy” (p. 178).

Starling’s commentary on these two Pauline texts exhibits several strengths. First, his treatment of Paul’s use of the Hebrew Bible (particularly in Ephesians) is quite helpful. This should not be surprising for anyone familiar with his published PhD thesis, Not My People: Gentiles as Exiles in Pauline Hermeneutics, BZNW 184 (Berlin; De Gruyter, 2011). Second, Starling effectively traces how Paul frames the believer’s new identity in Christ in these texts. In doing so, he shows how Paul constructs his argument in these texts to ensure he accomplishes his overarching purposes. Third, Starling navigates sensitive cultural issues within the “household code” sections with wisdom and careful attention to the text. For example, concerning Ephesians 5:22, Starling suggests that “husbands are charged with a particular authority or responsibility that wives are to recognize” (p. 141), yet then argues concerning the Greek noun κεφαλή (“head, ESV) that “the dichotomy between ‘authority’ and ‘source [of strength and fullness]’ as rival senses of the metaphor in [Eph] 5:23 is … best rejected as a false one” (p. 142). While Starling somewhat overstates his case, his discussion of the noun κεφαλή does attentively account for Paul’s depiction of Christ and husbands in texts like Ephesians 1:22; 4:15; 5:23–30. Fourth, Starling’s discussion of the wisdom theme throughout Colossians (especially pp. 209, 226, 228, 252) demonstrates the central importance of Paul’s negative assessment of the “Colossian heresy” in Colossians 1:23.

Starling’s commentary, however, is not without some significant weaknesses. First, Starling largely fails to demonstrate the programmatic significance of Ephesians 1:10, which sets forth God’s plan to unite all things in Christ. Second, while Starling appropriately accounts for the complex interplay between the spiritual and earthly identity of the “powers” (e.g., p. 213) within some portions of Colossians, he argues τά στοιχεῖα τοῡ κόσμου (“the elemental spirits of the world,” ESV) in Colossians 2:8, 20 are to be understood as “basic principles of human piety and religion” (p. 236). In reading 2:8 in this way, Starling does not account for the impact of demonic influence within Paul’s discussion of the “Colossian heresy” (cf. 2 Cor 11:14–15; Col 2:8; 1 Tim 3:6–7; 4:1–4) and is then forced to conclude the same terminology in Colossians 2:20 refers to “‘the basic principles’ of the world order under which Christ was crucified” (p. 249). In general, interpreting the phrase τά στοιχεῖα τοῡ κόσμου in 2:20 as evil, spiritual beings makes better sense of the preposition ἀπό (likely conveying separation), Paul’s negative use of the noun κόσμος, and the nature of the overall rhetorical question in verse 20. Third, while Starling rightly correlates the “Colossian heresy” with Hellenistic Judaism (e.g., p. 179), he at least minimizes the dualistic (and likely platonic) elements within the “Colossian heresy.” Among other things, this then affects his treatment of the noun σκιά in Colossians 2:17 and asceticism in texts like 2:18, 21, 23. Fourth, and most importantly, the brevity of this commentary limits the viability of designating this a “theological” commentary. Starling, of course, addresses theological issues in this commentary and is not to blame for this shortcoming. Nonetheless, someone with a limited budget in search of extensive treatment of Paul’s theological message in Ephesians and/or Colossians should probably look elsewhere.

Despite these limitations, this commentary remains an immensely valuable resource, particularly for the non-specialist. Anyone serious about understanding a canonical text must consult an abundance of secondary sources. Laypeople and pastors needing guidance in apprehending Paul’s message in Ephesians and/or Colossians would do well to include this commentary in their “toolbox.” Scholars working closely in these two texts would also certainly benefit from the exegetical insight Starling extends in this commentary.