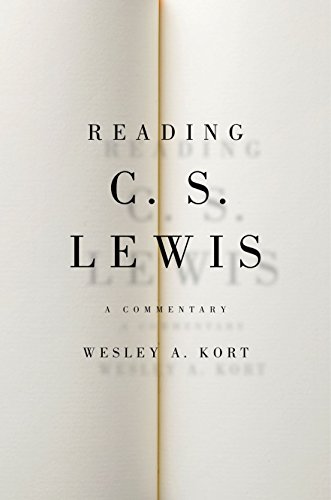 The overall goal of Reading C. S. Lewis is to “give attention both to particular texts and to a structural wholeness or coherence in Lewis’s work” (p. viii). Wesley Kort, who describes himself as “neither a devote nor detractor” (p. vii) of Lewis, notes a tension between those who admire Lewis’s work because of the academic credibility it brings to Christianity, and those who are critical of it because his defense of Christianity compromises the value of his other scholarly or imaginative works. Kort hopes to provide an alternative reading of Lewis, one that brings into view “the stable, basic, and even controlling constants of his work” (p. vii).

In order to understand and appreciate Lewis’s overall project, Kort organizes Lewis’s writings into three parts: “reasonable assumptions,” “cultural critiques,” and “applied principles.” Within each part, Kort includes essays on individual works of Lewis, which can be read as stand-alone commentaries, followed by a summary essay pulling together the thematic issues that inform Lewis’s vision of reality and his apologetical method.

After a helpful introduction sketching the context for Lewis’s work—his “Englishness,” his identification with and love of Ireland, his erudition, his interest in myth, his relationship with English modernity, his return to Christianity, and his expectations for his readers—Kort begins part one of the book by looking at Lewis’s spiritual autobiography, Surprised by Joy. Also in this first section are discussions of The Problem of Pain, The Screwtape Letters, and Mere Christianity.

Basic to all of these texts, according to Kort, is Lewis’s assumption that many foundational and important moral and religious matters are generally agreed upon by all reasonable people. The texts considered in this section are important because they highlight Lewis’s desire to present Christianity, and not materialism, as the best explanation of shared human experience. These shared human experiences include joy, the sublime, the numinous, our awareness of a moral law, and the universal sense that we are a part of a story bigger than ourselves. Such experiences “occur widely and are sufficiently revealing to warrant a basic place in one’s worldview” (p. 88). These shared experiences, if we allow them, open us up to reality and help us find our place within it as fully functioning persons.

In part two, Kort discusses Lewis’s critique of modernity as expounded in The Abolition of Man and embodied in each of the texts of the space trilogy. This section will be most helpful for those who have read Lewis’s space trilogy and (rightly) sensed that there is more going on than meets the eye.

Scientism, and its resultant materialism, has led to a fact-value split, the myth of progress, urbanization, and the unmooring of man from the larger world. Lewis is keen to recover an earlier outlook of the world, an outlook that values place, virtue, and openness to the spiritual. Lewis believes that one’s character and view of the world matters for a “healthy culture is a prerequisite for the right understanding and practice of religion” (p. 109). To illustrate the ills of modern man, in his space trilogy, Lewis sets side-by-side competing outlooks and trajectories: Weston and Ransom, N.I.C.E and St. Anne’s, the “bent” humans and the innocent hrossa. One champions “objective” science, the other all that is good about language, tradition, culture (including science), and virtue; one is on a trajectory of destruction, the other on a path toward sanctification; one lives for self, the other for a larger story.

In the part three of the book, Kort explores the first two and last two Narnian books as well as Lewis’s non-fiction text The Four Loves. The text explored in this section reveal Lewis’s constructive project where he delineates and defends, through imaginative works and application of moral and doctrinal principles, the truth, goodness, and beauty of the Christian worldview. Some moral principles and doctrines that find expression within the world of Narnia are the emphasis on place—Lantern Waste, Aslan’s How, Cair Paravel—over temporality, virtue and vice, creation, the fall, redemption, and restoration, the modern enchantment of power, historical skepticism (in Prince Caspian the memory of Aslan’s coming had faded), unbelief (explored through the character of King Miraz, Nickabrik, and Trumpkin), faith (explored through the characters of Lucy and Susan), and identity formation through relating to and loving things, others, and God.

One shortcoming of Kort’s book is the relative absence of any discussion related to Lewis’s faith in Christ and the foundation of this faith to his personal identity. Kort notes that Lewis does hold to a high Christology, but thinks this Christology is not dominant in Lewis’s works (and the reader is left wondering if it is also not dominant in Lewis’s life). As Kort puts it, “in my opinion, what counts most in his conversion to Christianity … is that Christianity offers a more adequate account of things than is available in alternative accounts, especially non-religious ones” (p. 24). There is little mention of the living God, the “transcendent interferer,” who (as Lewis put it in Miracles) “approaches us at infinite speed.” For Lewis, faith in Christ was fundamental to everything else, including intellectual theorizing: in looking to Christ, we find him, and with him everything else besides. Still Kort’s book is a helpful guide to those who want to understand individual texts as well as some of the overall themes of Lewis’s substantial body of work.