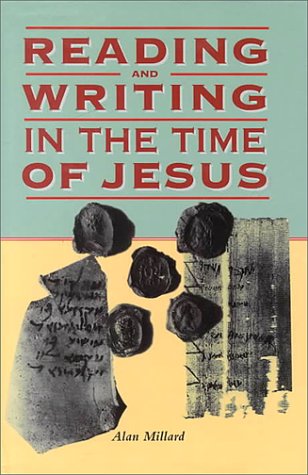 READING AND WRITING IN THE TIME OF JESUS

Written by A. Millard Reviewed By Alistair I. Wilson
New Testament

Alan Millard has written a wonderful book. The purpose of this book is to challenge the commonly held view that there was a substantial period of time between the ministry of Jesus and the writing of the first gospels during which the traditions were passed on solely by word of mouth and thus there was ample opportunity for the Jesus traditions to be modified. Along the way, however, Millard provides a wealth of information and careful argument on ancient Near Eastern writing materials, issues relating to the identification and dating of early Christian manuscripts, the displacement of the scroll by the codex, archaeological evidence of writing in Herodian Palestine (including discussion of evidence in Aramaic, Greek, Hebrew and Latin found on, inter alia, coins, business documents, pottery pieces or ‘ostraca’ and bone boxes or ‘ossuaries’), evidence for competence in more than one language, the various groups who would have been able to read, to write or both and evidence for writing in the Gospels themselves.

Those who have read Millard’s work before will not be surprised to find that he has the ability to convey rather complex issues in a way which is not simply clear but also interesting. While some background knowledge of ancient history and geography is probably an advantage, the reader without such background knowledge will find that there is normally sufficient explanation of an issue to allow him or her to follow the argument.

Millard is a ‘conservative’ scholar in the sense that he sets out to conclude no more than the available evidence will sustain. Thus he rejects the identification of the tiny Greek fragment from Qumran named 7Q5 as a fragment of Mark’s Gospel on the grounds that ‘there is too great an area of uncertainty for the identification to be allowed as more than the smallest percentage of possibility’ (56).

There are numerous helpful black and white photographs, including shots of the fine detail of texts discussed, which allow those who have the requisite skills to evaluate the author’s conclusions. There are a few places where ancient languages are used without translation but these should not unduly disadvantage the reader without knowledge of these languages in following the discussion.

Whether one picks up this book as a Gospel’s specialist wishing to evaluate the claims of Form Critics, or as student of first-century society seeking information on means of communication in Palestine, or as one with an amateur interest in archaeology, one will get a good read and learn a great deal.