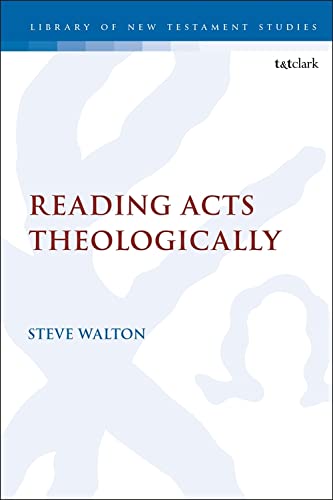 Steve Walton is a leading scholar on Acts, who is presently writing the Word Biblical Commentary on Luke’s second installment. Reading Acts Theologically brings together twelve previously published essays that are written from a sympathetic, integrated, “theological” perspective on Acts. Added to this volume is an opening essay, not previously published, on what it means to read Acts theologically.

The book divides into three sections. Part 1 (“Looking at Acts”) deals with issues of prolegomena to reading Acts theologically. This includes the opening chapter focusing on what it means to read Acts theologically (and presumably helps explain the book’s title). For Walton, to read the Bible theologically means to read the texts as Scripture, and asks about “the central topics of Scripture, namely God, and God’s engagement with humanity and the world” (p. 4). This marks a welcome break from the more minimalistic historical-critical approach from the past few hundred years, as Walton himself observes (pp. 4–5). To read the Bible theologically aims for a scriptural worldview and lifestyle that accords with it (p. 5). Further, Walton cautions against allegorical readings of Scripture. He affirms the importance of the Rule of Faith, which is a faithful summary of Scripture, even as it is subject to the Scriptures (pp. 6–7). Walton then applies this approach to Acts, stating that he will read Acts sympathetically with a hermeneutic of love, seeking to listen to the text as carefully as possible (p. 8). This is an approach to applaud. Chapter 2 argues that Acts is primarily about God, which is based in no small measure on the sentence and clause subjects in Acts. Chapter 3 addresses Luke as a narrative theologian; here Walton identifies himself first of all as a theologian and person of Christian faith who happens to be a NT scholar (p. 31). This deserves a hearty “Amen.”

Part 2 (“The Believing Communities and Their World”) focuses mainly on issues facing the early believers in Acts, such as the role of the Temple, whether they practiced an early form of “communism” (they did not), and the relationship of church and state (esp. chs. 8–9). Part 3 (“Theological Themes in Acts”) focuses on issues of Christology, cosmology, and anthropology in Acts. In terms of Christology, Walton appreciatively follows the divine identity Christology espoused by Richard Bauckham. Walton concludes that Acts has a high, divine Christology, while also affirming that Jesus is truly human. Walton also rightly questions those who downplay the reality of the ascension (interacting, e.g., with Strauss, Bultmann, and Dunn; see pp. 163–64).

Walton’s collection of essays makes numerous contributions to the study of Acts. The footnotes provide a great deal of help for students or scholars seeking to find the leading voice on a range of topics. Walton also raises awareness of debated issues in the study of Acts, while consistently coming to exegetically sound conclusions and guiding readers through difficult issues. For example, he provides sane guidance on how to understand the apparently conflicting approaches to the temple in Acts (that is, whether the early followers of the Way did or did not view the Temple positively, seen for example in the different approaches to the question from Stephen and Paul). Walton explains that Acts recounts a salvation-historical shift, and it takes time for this process to be worked out (p. 87).

This volume is a solid work of NT scholarship, revealing a keen awareness of the historical and literary context of Acts. Where it is sometimes less persuasive is when theological claims are made without sufficient interaction with systematic and historical theology. To be clear, Walton defines what it means to read Acts “theologically” in chapter 1, and he does not intend to write a systematic theological work. His theologically-inclined approach is welcome for a work of NT scholarship, but the parameters of his own method limit his ability to engage some of the trickier theological issues he broaches. For example, as important as the Rule of Faith is for reading the Bible, it was not the final word to address later theological controversies, particularly with respect to the divinity of the Son and the relationship of his person and natures (e.g., Arianism, Apollinarianism, Nestorianism). We therefore also need to be informed by later theological articulations that addressed even more precisely theological questions pertaining to God and Christ (so, e.g., Nicaea, Ephesus, Chalcedon). In this respect, Walton’s turn-of-phrase “God-in-Jesus” (e.g., pp. 24, 197, 206) seems less than felicitous. Another example that needs more nuance is Walton’s argument that God suffers, noting texts such as Acts 2:23–24; 3:13–15 (pp. 158–59, 175). As it stands, this suggestion is not compelling because it does not clearly distinguish between God’s works in relation to creation and the economy of redemption, and God ad intra. At the very least, more nuance is needed, and his argument would have been well-served by interacting with the broader Christian exegetical tradition on impassibility. (Compare also his lack of appreciation for the medieval Scholastics who “stressed clear, analytical thinking about God,” which Walton argues led to philosophy dominating over theology [p. 32]—but this seems a straw man, as Walton offers no specifics.)

Further, while I affirm with Walton that Luke is a narrative theologian and narrative texts “do theology,” I am more circumspect about the ability of narrative texts to clarify controversial or programmatic issues. For example, Walton suggests that Acts hints that Lydia was a leader in the church (p. 208). To be sure Walton seeks to be careful in his conclusions here, but if he means by this that Lydia occupied an ordained leadership role, then we need to be clear that the text does not say this. To address this question requires us to bring Acts into conversation with clearer texts on the matter.

These observations do not diminish the several contributions Walton has made in this helpful volume. But it does remind us that theological readings of texts, as welcome as they are, still need the insights of historical-theological studies, even as the latter need the former. I benefited from this book, as will all who pick it up. It will be especially useful for professors, scholars, and advanced students of Acts. I look forward to learning more from Walton’s deep familiarity with Acts in his forthcoming commentary.