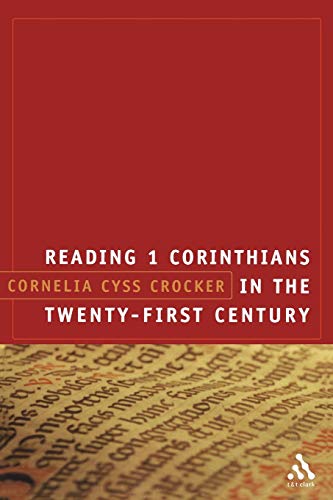 READING 1 CORINTHIANS IN THE 21ST CENTURY

Cornelia Cyss Crocker proposes that reading 1 Corinthians in the twenty-first century means moving beyond the historical-critical methods utilized in the past and reading through the additional lenses of ‘aporia’, ‘dialogism’, and ‘discernment’.

In reading 1 Corinthians through the lens of ‘aporia’, Crocker assumes that the text has inherent ‘tensions’ but resists the temptation to resolve them. She suggests that these tensions arise as believers strive to live in both this present age and in the reign of God. The danger in such a reading, however, (as Crocker admitst) is that it places one on ‘an ambiguous path’ leading only to partial and provisional insights. Truth becomes even more ambiguous if one concurs with the author that it cannot be ascertained through any method but only through an individual’s ‘revelatory encounter’ with or without the text. Another danger of this aporetic lens is that it could predispose one to find non-existent paradoxes (e.g. she holds that Paul’s concepts of new creation and love are in tension).

Crocker borrows the second reading strategy from literary critic Mikhail Bakhtin: he demonstrated that in Dostoevsky’s novels a synthesis or resolution is not expected due to the ongoing dialogue, a notion he termed ‘dialogism’. Crocker proposes that instead of a rhetorical-critical reading which places too much emphasis on Paul’s voice, one should focus on all the voices (e.g. the believers and non-believers in Corinth as well as contemporary readers of 1 Corinthians) and should assume ‘a fairly equal relationship among them’. Although there is value in Crocker’s admonition to understand Paul in the midst of a dialogue, one must be careful in reconstructing those other voices beyond what is mentioned in the text, especially if one allows that to influence the explicit voice of Paul.

Finally, Crocker encourages one to need the text in light of Paul’s concern that the Corinthians must make their decisions according to the reign of God rather than the old moral order. Crocker raises women valuable questions concerning these decisions and infers that Paul considered the concepts of new creation and love as central for the church in the process of discernment.

Crocker professes her desire to deal within 1 Corinthians in a way that liberates some and homosexuals to be included in all aspects of ministry. Although she does not demonstrate how her reading liberates the latter group, Crocker does deal with Paul’s treatment of women. In light of this, the author dismisses the history of biblical interpretation since (according to her) it was dominated by men with inevitable ‘preunderstandings’ and concludes that these passages must now be ‘claimed by and read from a feminist perspective’. Surely there is another way, however, since the feminist perspective contains ‘preunderstandings’ as well. Crocker gives a few examples of recent attempts to resolve the tension found in Paul’s treatment of women, yet, she does not give sufficient ground for her dismissal of these attempts—only that they do not utilise an aporetic reading.

Crocker’s book does contain some noteworthy insights as well as a valuable summary of the historical-critical methods used for interpreting 1 Corinthians, nevertheless, in the end, one must ask whether the readers of the twenty-first century should read the letter through lenses in which the readers of the first century themselves would not have employed.