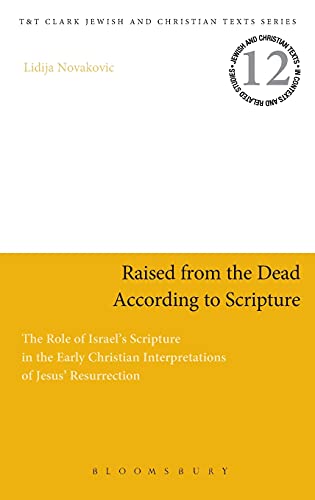 Raised from the Dead According to Scripture: The Role of the Old Testament in the Early Christian Interpretations of Jesus’ Resurrection (Jewish and Christian Text)

One of the greatest intellectual demands laid upon the earliest Christians was the demonstration that Israel’s Scriptures witnessed to the surprising events of the resurrection of Jesus as Israel’s Messiah (e.g., Luke 24:25–27, 44–45; 1 Cor 15:3–4). Particularly difficult is the fact that no Second Temple Jewish text clearly anticipates the Messiah’s resurrection. In Raised from the Dead according to Scripture, Novakovic examines Israel’s exegetical methods and traditions and shows how they were put to use to undergird the NT texts’ claim that Scripture predicts the Messiah’s resurrection.

Novakovic’s methodological starting point is that the authors of the NT use the same interpretative methods and strategies as their Jewish counterparts. Her first chapter is thereby devoted to a lengthy discussion of scriptural interpretation in Second Temple Jewish literature. In this chapter she treats such matters as the distinction between implicit and explicit exegesis, Targums, rewritten Bible, Qumran’s commentaries on Scripture, Philo’s exegetical techniques, rabbinic interpretation, and the strategies used to make sense of the biblical text. While the chapter provides a helpful introduction to these matters, a good deal of her work here is not taken up again (some is) to make sense of early Christian scriptural interpretation. For example, how does Philo’s exegetical techniques or rewritten Scripture illuminate the hermeneutical methods of the NT authors with respect to the matter of the resurrection?

Before Novakovic turns to the NT evidence, she rightly works through the OT and early Jewish material related to the resurrection “in order to establish the hermeneutical framework within which Christian exegetical endeavours took place” (p. 68). While others have recently provided helpful studies of this material (one thinks of N. T. Wright, Alan Segal, and Dale Allison to name just a few), Novakovic’s chapter demonstrates “that resurrection hope was a major form of belief in the afterlife among Jews in the late Second Temple and early rabbinic periods” despite the fact that “the expectation of the resurrection of the dead was by no means uniform” (p. 112). She rightly notes that Ezek 37, Isa 26, Hos 6, and Dan 12 provide the resources for later interpreters’ articulation of resurrection from the dead whether or not this is the precise “meaning of these passages in their original literary and historical settings” (p. 112). Further, while some writings (e.g., 4 Ezra and 2 Baruch) anticipate resurrection during the time of the Messiah, no early Jewish texts predict the resurrection of the Messiah himself—which is the very event the NT claims the Scriptures make.

Chapters 3, 4, and 5 are the heart of the work where Novakovic examines the passages and exegetical techniques drawn upon by Paul, the Gospel writers, and the author of the Acts of the Apostles. She argues that the frequent claim that Jesus was raised on the third day (e.g., Mark 8:31; 9:31; 10:33–34), a claim Paul states is “in accordance with the Scriptures” (1 Cor 15:3–4), most likely derives from reflection on Hos 6:2. This conclusion is bolstered by the early Jewish and rabbinic texts that argue, “God does not leave the righteous in distress for more than three days” (p. 129). She has a helpful section on Rom 1:3–4 where she notes the influence of the Davidic psalms upon Paul’s depiction of Jesus’ resurrection as his royal enthronement. Further, in 1 Cor 15:20–58, Paul reads Gen 2:7 through a christological lens to present Jesus as the last Adam who became, through his resurrection, a life-giving spirit.

In the Gospels Jesus draws upon the story of Jonah and compares his own time in the grave with Jonah’s time in the belly of the fish “in order to demonstrate that [his] resurrection functions as the sole authentication of his messianic identity” (p. 218). The accusations against Jesus at his trial, namely, that he would destroy the temple and rebuild it in three days (Mark 14:58; cf. John 2:18–21), are plausibly understood within the messianic framework of the son of David as a temple builder (e.g., 2 Sam 7:10–13; Zech 6:12–13; 4Q174), and it is the resurrection that “becomes the specific moment at which the messianic building of the temple begins” (p. 196).

In Acts both Peter and Paul draw upon Davidic traditions to show that the Messiah’s resurrection has been foretold in Scripture (Acts 2 and 13). David is a prophet (Acts 2:30), and therefore his psalms are resurrection prophecies (e.g., Ps 16). Further, for Acts it is the resurrection of the Messiah that inaugurates the fulfillment of God’s royal promises to eternally seat one of David’s descendants upon his throne (2 Sam 7:12–16; Pss 2:7; 132:10–11).

Novakovic has produced a helpful resource for any student or scholar wanting to examine (1) early Jewish scriptural methods and techniques; (2) the hope for resurrection in the OT and early Jewish writings; and (c) how the NT authors use and interpret Scripture with respect to Jesus’ resurrection. While the argument is not groundbreaking, the book is as a useful, clearly written, well-researched guide to anyone interested in these topics. A frequent refrain throughout her examination of the NT evidence is that belief in Jesus the Messiah’s resurrection from the dead goes beyond scriptural argumentation and must proceed from revelation. More attention to the way in which early Christian experience produced a retrospective reading of the NT texts, therefore, would have been helpful. Likewise, given the enormous role the Psalms play in the NT’s articulation of Jesus’ resurrection—one only need to think of the speeches in Acts, Rom 1:3–4, and 1 Cor 15:20–28—I wondered why they were not examined as part of the second chapter on resurrection hope.