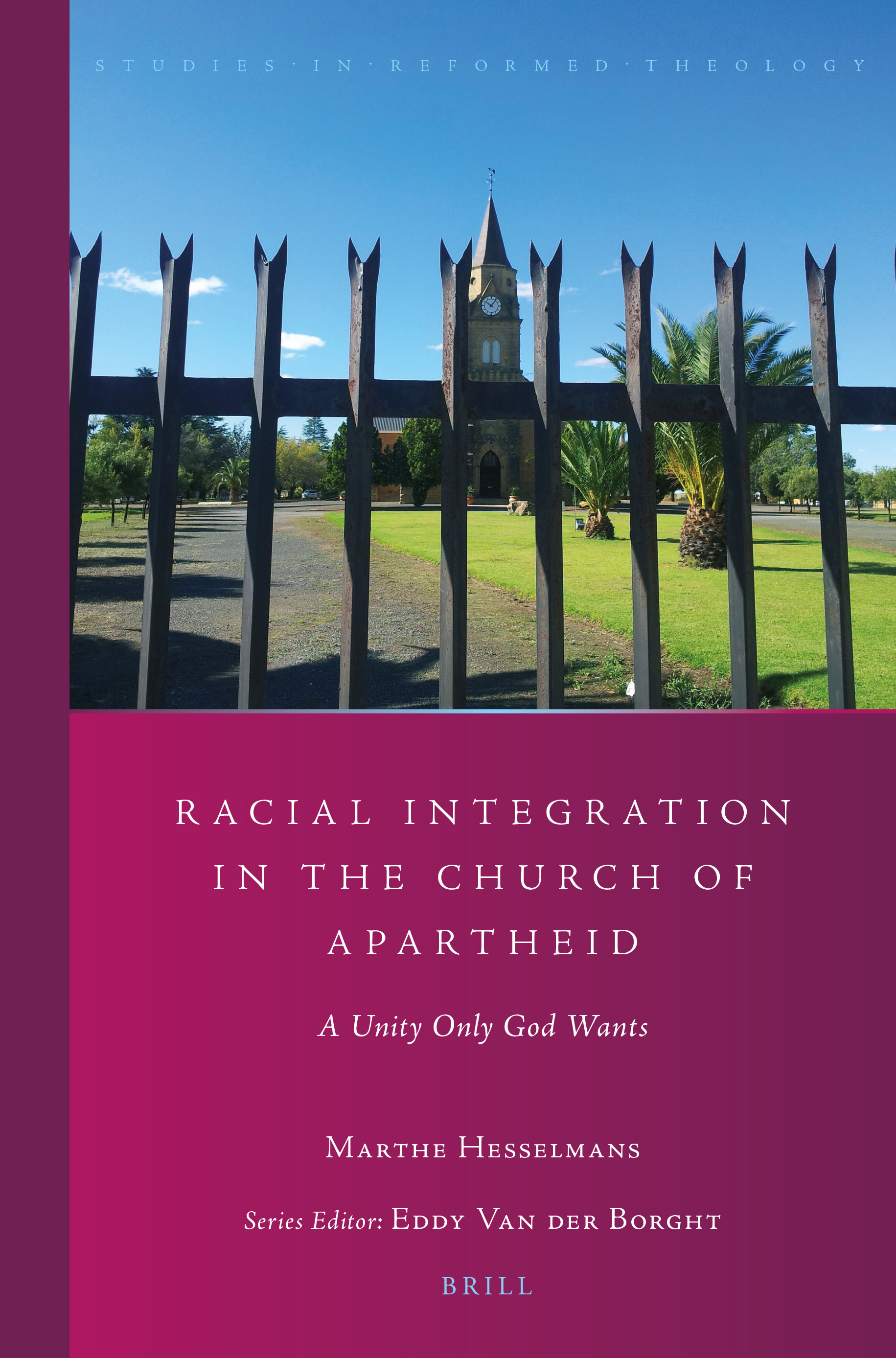 Racial Integration in the Church of Apartheid: A Unity Only God Wants

Hesselmans is a senior researcher at Van Mierlo Foundation in the Netherlands. She is the co-author with Jonathan D. Teubner of the booklet An Analysis of Gustavo Gutiérrez’s A Theology of Liberation (London: Macat, 2017). With this monograph, she offers a revision of her PhD dissertation at Boston University.

In the introductory chapter, she notes that while the “mother” Reformed church in South Africa, the Dutch Reformed Church (hereafter, DRC), denounced “the racial and ethnic divisions it once so fervently supported” (p. 1) near the turn of the millennium, the Reformed churches remain segregated in a post-apartheid era. She contends that to grasp persistent divisions within this family of churches fully, one must first understand “their roots in the apartheid era” (p. 3). Because of the pressure toward integration faced by South African Reformed churches and their simultaneous desire to maintain their distinct ethnic identities, they provide a telling glimpse into South Africa’s social and religious realities and, in turn, warrant her specific focus on this church family’s struggle with diversity.

Given the complexities that emerge from the dilemma of embracing diversity, on the one hand, while preserving a distinct identity, on the other, she takes “an interdisciplinary approach” that consists of insights from “religious studies” as well as “identity studies” (p. 4). With the latter, she focuses on how distinct identities (e.g., religious, national) are interwoven; with the former, she highlights the move away from secularization toward pluralism and increased religious diversity in society. She combines this with the use of such methods as “discourse analysis, archival research and qualitative field research” (p. 20). Yet, she admits that as a Dutch speaker with limited connections, she was unable to fully “address the perspective of the black African churches” (p. 22).

The book has two parts. The first part is historical; the second part is sociological, employing the aforementioned interdisciplinary approach. The conclusion to the book takes a more prescriptive tone, arguing a way forward for “overcoming social divisions in South Africa, and beyond” (p. 234).

In chapter 1, Hesselmans surveys the history of South African from the beginning of its “apartheid regime in 1948” (p. 30) to the present day. Here, she covers the role of the DRC in justifying systemic racial segregation by grounding it in God’s will, but even more, the DRC’s hand in constructing “a Christian-nationalist civil religion,” which proved formative for the church as well as for “the ruling National Party” and the “highly influential … Afrikaner Broederbond” (p. 30). Despite the eventual dissolution of this civil religion, its influence, she suggests, continues to be felt in South Africa, with deep socioeconomic and political divisions as evidence. In fact, as recent as 2012, “ethnicity and color remain central issues” (p. 61).

In the second chapter, she describes the struggle for unity in the Reformed church family from 1948 to the present. Previously, the Dutch Reformed Mission Church (DRMC) was formed to serve the “‘colored’ community” consisting of an Afrikaans speaking group of “mixed Asian, African and European heritage” (p. 66). Indigenous communities were served with the formation of synods, which later emerged as the Dutch Reformed Church in Africa (DRCA) and Indian and Asian populations were served with the Reformed Church in Africa (RCA). The DRMC and DRCA merged into the URCSA (United Reformed Churches of Southern Africa) in 1994. These distinct bodies with their respective ethnic identities and ecclesial expressions are key to understanding the struggles this family of churches faces. The author demonstrates that one major example of this is the conflicting reactions to the anti-apartheid Belhar Confession, first drafted in 1982, with some opposing it on Kuyperian grounds (e.g., sphere sovereignty) and others affirming it in line with Karl Barth and the Barmen Declaration of 1934.

These two chapters pave the way for the sociological analysis of chapters 3–4. Chapter 3 investigates how the Reformed identity is being reframed “in post-apartheid South Africa through a discourse of unity” (p. 99). Tragically, Hesselmans finds that the discourse has led to an entrenched division between the DRC and its now-autonomous, though still associated, “daughter” church, the URCSA. The final chapter drives home the failed attempt to unite the disparate groups in the Reformed family into one “multiracial institution” (p. 231) by providing case studies of attempts at unity and the lack thereof in different regions of South Africa. Moreover, the author discovered that “circumvention of delicate issues” resulted in “few interracial alliances” formed among Reformed churches (p. 233).

The author concludes the book by reiterating why efforts toward unity didn’t work and by offering some suggestions as to what could produce true unity. Though unity was urged from the pulpit, it often had the unintended result of bolstering the need to protect “communal distinctiveness” (p. 237). Moreover, the top-down, institutional approach to unity marginalized church members who were forming interracial connections and exacerbated the fears of those concerned with losing their distinct ethnoreligious identity. She contends that greater levels of collaboration on the local level will build trust and allay the fears that accompany integration. This trust can be strengthened by the use of religious “symbols, beliefs and practices” to produce a “common sense of belonging” (p. 246).

This is a sobering book because it touches on so many of the same struggles churches are experiencing in the North American context. By giving detailed attention as to the reasons for the failed attempts at unity among the Reformed church family, Hesselmans has done an excellent service to the churches in South Africa but also to the churches abroad, especially those in North America whose past and present share some noticeable similarities with their South African counterparts. One of the most significant insights that emerged in the course of her study was that true unity is hard-earned and requires deep humility and honesty. Highly recommended.