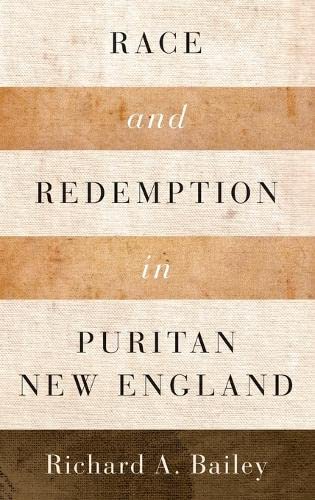 Bailey, a professor at Canisius College with graduate degrees from the Southern Baptist Theological Seminary and the University of Kentucky, surveys the racial views of primarily pastors and other elite New Englanders and their encounters with non-whites. This white-dominated perspective is partly explained by a dearth of sources from Native Americans and Africans. Pastors even shaped surviving conversion testimonies of non-whites, making it difficult to hear unmediated black and Indian voices.

Bailey also focuses on the ways in which white New Englanders “constructed” race through religion. He employs the language—some might say jargon—of cultural studies, a rhetoric that has come to dominate history journals, academic monographs, and revised dissertations like Bailey’s. This way of framing the book helps Bailey engage with current trends in the study of race and culture; unfortunately, it will probably not help attract a broader popular audience for Race and Redemption.

Still, Race and Redemption offers a rich array of sources related to the Puritans’ (he prefers “puritans”) efforts to evangelize and Christianize Native Americans and blacks, including a host of conversion accounts, deathbed professions of faith, and catechisms written especially for people of color. These sources demonstrate that, in spite of myriad practical inequalities between them, Puritans still fundamentally viewed African Americans and Indians as people with souls capable not only of salvation but instruction in proper (Calvinist) theology. Indeed, one is struck by how the Puritans’ missionary efforts—efforts often disrupted by local animosities, violence, and war—focused on the transmission of theological principles: human depravity, the damnation of sinners, and the wondrous offer of salvation made possible by Christ’s atoning death. These efforts stood in contrast to scenes of harsh physical discipline and unequal treatment of slaves in civil and church courts.

Indeed, Bailey sees the Puritans as people living in an exceptional state of intellectual and social “contradiction,” perhaps the key term in the book. Those contradictions began with their Calvinist theology, which taught, among other things, that a good God chooses only the elect for salvation, leaving the non-elect to their own preference for perdition. But is “contradiction” the right historical term for what, more generously, amounts to paradox? “Contradictory,” I often wondered, compared to what? Free will Arminianism? Atheism? Do those systems not have their own tensions and inconsistencies?

Similarly, Bailey argues that people of color found that the “law represented the fundamental contradiction that men and women faced,” (p. 62) as it separated them racially even while acknowledging their humanity. But again, contradictory compared to what? Modern law? The laws of other colonies? You would be hard pressed to find a colonial-era legal code that was not racist when judged by today’s standards.

Bailey makes his reference point clearer concerning Puritan “genocide” against Native Americans. Puritans, he says, believed in an OT that mandated “justice and [fair] treatment of the oppressed,” so their violent expropriation of Native American land contradicted their doctrine (p. 30). But what of that same OT’s passages describing the wholesale destruction of the Canaanites? Bailey knows that on such issues, the message of Scripture is hardly unambiguous. Was Puritan New England less just on racial matters than other places at other times? Absolutely. But I think, in general, it is better to explain why a people’s beliefs made sense to them, rather than repeatedly insisting that those beliefs contradicted their actions.

What Bailey calls Puritan “dis-ease” with slavery did bear fruit, however, as certain evangelical New Englanders, both black and white, formed the leading edge of a new American antislavery movement during the Revolutionary era. These advocates, including Jonathan Edwards Jr., tried to resolve Bailey’s contradiction in favor of human liberty.

Some Reformed and evangelical readers may find that Bailey singles the Puritans out too much for special, uncontextualized criticism of racial slavery and wars against Native Americans. Perhaps Bailey just thinks that, as theologically serious Christians, the Puritans should have known better. But persistent readers will find in Race and Redemption much to ponder in the tragic history of race in early America. America remains deeply unequal, socially and economically, with divisions still often running along lines of race. Churches would do well to take seriously both the current realities and the deep historical background of that inequality.