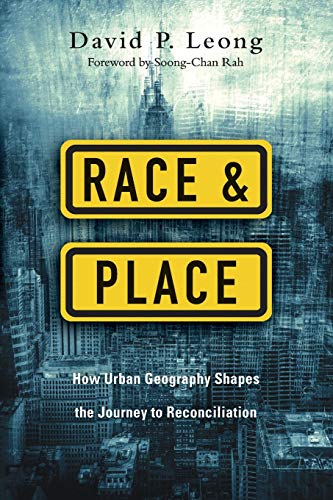 Race and Place: How Urban Geography Shapes the Journey to Reconciliation

Coming from an urban background in the Bronx (New York City), I know firsthand the pain, anger and disillusionment that poverty, prejudice and violence play in forming a person’s identity. As a high school freshman, I walked from business to business to get a job so we would have food and was told, “We don’t hire your kind.” I attended funerals for friends who “got into it” with someone only to be shot and killed. I knew full well it could have been my funeral. I also know what it is like to be rescued out of such an oppressive way of life, out of a physical and mental isolation, by the gospel and the Church.

So, I deeply value the premise of Race and Place by David Leong, an Associate Professor of Missiology at Seattle Pacific University. The book surveys the vast space of American racial issues by looking at racism, classism and prejudice in its geographical history and urban landscape. Leong’s work is a call for the Church to see issues of race and place as a missional and prophetic context.

Other texts have considered these themes, including Colin Flint’s Spaces of Hate: Geographies of Discrimination and Intolerance in the U.S.A. (New York: Routledge, 2003), and Kris Rocke and Joel Van Dyke’s Geography of Grace: Doing Theology from Below (Tacoma, WA: Street Psalms Press, 2012). Flint looks mainly at hate organizations and their histories. Rocke and Dyke follow people who offer theology, grace and help to the violent urban contexts. However, Leong’s approach is different from both these books. His analysis is theologically driven and seeks to offer a “deep reading of Scripture and the city” as “essential to understanding the signs of the time” (p. 28). The signs of racial prejudice, disharmony, and the need for reconciliation are obvious. Therefore, the mediating structure of Leong’s format is to “bring theology and geography into conversation,” taking a step back from the racist and prejudiced histories of our urban places to understand how our environments shaped our own views and how we can then “practice Christianity faithfully” in those places (p. 29).

The book is split into three parts. In the first section, Leong defines and explains such terms as “race,” “place” and “colorblindness” in the hope he will win over readers to understand the necessity of living in urban places with social conflict with more mission mindedness and social responsibility. It is here where he argues for a holistic view of place because “geography reveals how race [prejudice] works systematically and not just individually” (p. 41).

The second part surveys patterns of exclusion, particularly along racial and economic boundaries in urban areas. Leong examines multiple concepts, including walls of hostility, racial isolation, and patterns of geographic isolation among the urban poor and minority groups. On behalf of these issues, “Christian communities, especially those engaged in urban ministry, have a unique opportunity to practice and model meaningful reconciliation work” (p. 113). Leong critiques some answers given for these problems to these issues such as gentrification and attempts at education reform and housing. However, he stops short of making any clear proposals other than imploring the church to care and get involved.

The last section offers a redress for the myriad of racial and economic hegemony in urban areas by discussing “communities of hope.” Leong’s hope is for the Church (and others) to envision a “practical theology of reconciliation through the lens of family, communion and neighborhood renewal” (pp. 18–19). Leong returns to the theme of reconciliation, calling Christian communities to become “contrast communities” who point beyond themselves to God (p. 160).

One of the most telling aspects of the book is Leong’s insistence that Christians think of racial issues both communally and individually. Seeing race in individualistic terms blinds people from grasping the serious issues prejudice has wrought as a “twisted form of ‘discipleship’…where race shapes us into its rationale and ways of being” (p. 52).

The most baffling discussion concerns gentrification and hipsterism, which could be causing many social problems—but I have serious doubts about whether hipsters are the gentrifying trouble-makers, contra Leong (pp. 129–53). His discussion of his friend Chad Anderson’s experience “being on the receiving end of a drive-by yelling of ‘gentrification!’” was most puzzling too (p. 186). I can think of many other things one could yell and none involve that word. Stories of Chad and his scooter aside, I was lost as to whether Leong understands the complexities of hood life and violence in many urban areas.

I commend this book to churches, students and educators alike who desire to delve into serious discussion about homogeneity in the Church, urban mission and Christian presence in some difficult places in society. Along with Leong’s book, I recommend reading other works, such as Geoffrey Canada’s Fist Stick Knife Gun: A Personal History of Violence (Boston: Beacon, 2010) and Rodney Woo’s The Color of Church: A Biblical and Practical Paradigm for Multiracial Churches (Nashville: B&H Academic, 2009). These texts keep readers’ heads out of the academic sociology clouds and focused on the real-mission––reconciliation in our Churches and not only in the neighborhoods of our Churches.