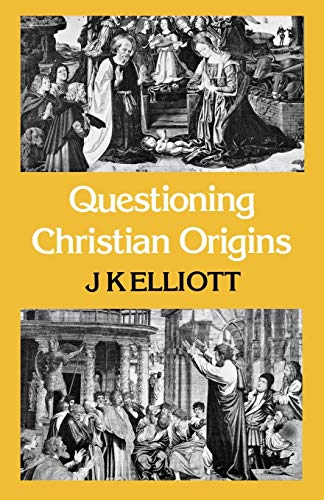 This book is an expansion of an occasional series of articles in the monthly journal History Today. Dr Elliott, who is Lecturer in New Testament Language and Literature in the University of Leeds, intends his study of the historical basis of Christianity for the student and the general reader. The book covers the nativity stories, John the Baptist, the ministry, teaching, trials, death and resurrection of Jesus, the evidence of Acts, and the place of Peter and of Paul in the history of the primitive church. Each chapter concludes with a short bibliography, listing the New Testament passages discussed, with a brief selection of secondary literature, including some entries representing viewpoints different from those of the author.

It must be said at the outset that the reviewer differs sharply from Dr Elliott on many of the issues. But this is a knowledgeable study, which, if it seems to take a ‘minimal historicity’ view, deserves respect and fair consideration. There is one pervasive problem in its method, the opposing of the ‘historical’ to the ‘theological’. Put very crudely, it is the argument that, if one can suggest a motivation for the early church to wish to alter or create a tradition, the case is established, and historicity excluded. Put so crudely, the argument is a non sequitur, and Dr Elliott is never so crude. He addresses himself to the real difficulties of the narratives, and the problem is thus overlaid. But for all that the principle is so readily invoked as to be pervasively present. The concepts of history and theology are opposed many times (pp. 2, 4, 5, 14, 16, etc.), and the exclusive opposition is assumed in the argument of nearly every page in some chapters. The choice between the categories is constantly posed in the form ‘either/or’, not ‘both/and’, nor otherwise qualified or nuanced. Further, his reconstruction often presupposes critical positions on the date and sequence of the documents from which again the reviewer would dissent, for reasons which would need to be argued more fully. Dr Elliott himself cannot lay out all his underlying reasons in a short and essentially popular book. It is only fair to say that he does not espouse extreme views here, but such as have at least some breadth of support, with occasional refinements informed by his own expertise in textual criticism.

Historical sources, of whatever kind, do not commonly give us ‘pure’ facts ‘for their own sake’ (cf. pp. 2, 87, 94). There is the personal factor in the work even of the most self-consciously objective historian. In practice most sources of information are evidently biased or imperfect, but we have to cope with the fact, and are not justified in rejecting or rewriting then wholesale. And it is arguable that the gospels are in fact much better sources than Elliott would allow.

Beside his polarized treatment of history and theology, he argues ingeniously on his own account for some elaborately subtle, if tenuously speculative, traditio-historical structures, like his accounts of the growth of traditions about the virgin birth (pp. 5–12) or John the Baptist (pp. 27–32) or of diverse portrayals of Peter embedded in Mark (pp. 117–119), which are all at best multiples of debatable ‘probabilities’. He recognizes the over-scepticism of some of the form critics (p. 39), sees primitive material especially in the early chapters of Acts (p. 44), and accepts the authenticity of most of the parables (p. 49). He treats the miracles as ‘theological statements in dramatized form’ (p. 48): it is ‘unlikely’ (a recurring word) that any are historical. He sees reciprocal tendencies where prophecy creates tradition and tradition finds prophetic support (pp. 9, 71) but without invoking explicitly the slippery concept of ‘midrash’. The Easter narratives cannot be regarded as historical (p. 84). The empty tomb in particular is ‘unlikely’ to be historical, and is ‘a denial of the miraculous element in the resurrection’ (p. 80—I don’t see why), and Paul and Acts are silent about it (p. 83). Sometimes he rejects an artificially literalistic alternative (pp. 37, 48, 69).

There is in the end no very explicit summing up of conclusions. Perhaps Dr Elliott intends not so much to offer a reconstruction as to pare away all he considers improbable. Little is left of the early life of Jesus beyond an origin in Nazareth (not Bethlehem) and the names of his parents. He is presented as a religious leader who was also a political messianic claimant, whose follower won a struggle first to supplant and then to assimilate John’s movement. Later a complex series of power struggles divided Paul from Peter, and from James, Barnabas and the ‘beloved disciple’. All this was followed by an eirenical attempt in the Lucan writings to rehabilitate Paul by paralleling him with the now ascendant Peter.

This rather pessimistic synthesis requires the rereading of the bulk of the evidence. The fact that this involves an extension of the legitimate (if often incautiously overplayed) insights of ‘tradition criticism’ and ‘redaction criticism’ does not dispel the problem. Dr Elliott gives many hostages to a critic. One is left feeling that there is a Gordian knot to be cut. If the piecing together of the evidence at something nearer its face value gives an intelligible and coherent, if partial, picture, why should we be persuaded by the multiplication of hypotheses? Once disturb this critical structure, as by an earlier placing of Luke-Acts (which I favour), or indeed by any significant change of sequence, and this elaborate defence of sparse conclusions looks increasingly precarious. And how can the singular phenomenon of Christianity, and its exploding impact on a hostile world, be convincingly explained through the complex of inner division posited here?

Let us be clear what we are proposing. It is no mere apologetic device to call for a simpler method. It is a plea for a more natural (and no less critical, or critically aware) reading of evidence. It recognizes that ‘facts’ are not simple, that tensions of perspective did sometimes divide the Christian leaders, that there were diversities as well as unity. It recognizes that historical events invariably come ‘interpreted’, not as ‘pure fact’. The historian’s task is precisely to handle such, and he should not be too ready to rewrite his evidence. Alternatives are not to be polarized. The alternative to a sceptical deployment of critical expertise is not uncritical credulity but a more thoroughgoing, and perhaps more balanced, use of historical method. Meanwhile we are indebted to Dr Elliott for his well-written and healthily provocative study, even if in his own way he strains our credulity overmuch.